For her first exhibition at Arcade gallery in London, Peggy Franck has installed her paintings, photography and printed carpets, creating a layered installation like a stage set 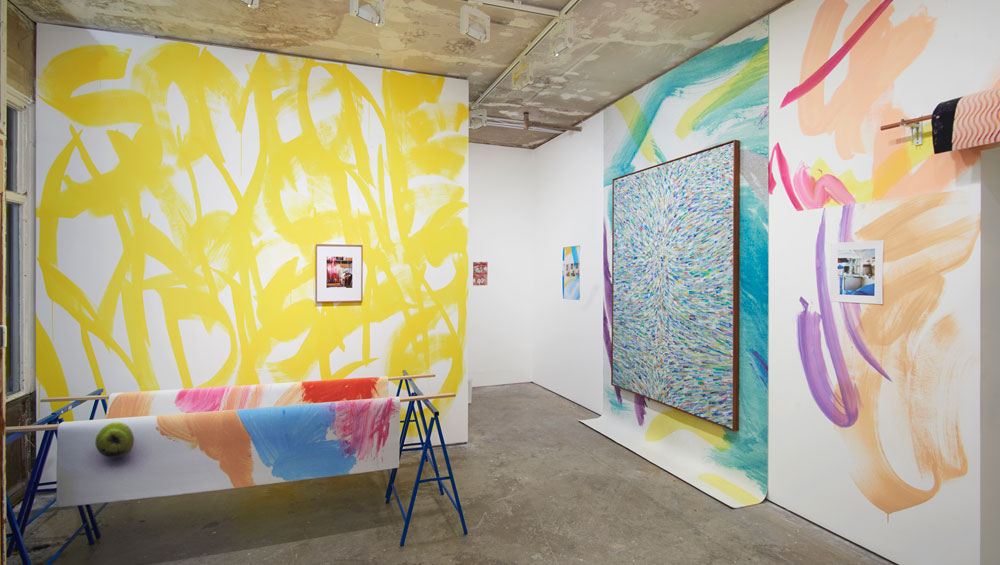 Layered work, painting, photography and installation become one visual experience in the work of Dutch artist Peggy Franck (b1978). At her first show with Arcade gallery in London, she presents “extracts” of previous exhibitions, combining the works into new sets or constellations.. The walls have become painted backdrops for scenes of framed pictures and unrolling reels of abstract carpets where Franck mixes the boundaries of material and medium, urging the viewer to move closer, step back and then move closer again.

When looking at Franck’s work, the viewer progresses through moments of visual recognition, gradually translating how a painting is actually a photograph of a painting, which is a photographed reflection, hanging within an interior. Franck alternates her focus between these layers of painting, photography and installation depending on her feeling about the space in which she shows them.

The gallery at Arcade is an irregularly shaped space with an alcove in one corner and a wide bay window, like an old-fashioned shop front, that looks on to the street. “I liked the roughness of the ceiling and the floor,” says Franck. “And the windows, of course. They create a framed image of the exhibition from the street: it’s like looking through the viewfinder of a camera.”

Framing is an integral part of Franck’s process. The edges of walls, bookcases and door frames, the regular shape of a piece of shiny card, the edge of a carpet – these all become frames for her paintings; she is always looking through the lens of materials.

“Figurative painting, that’s how I started making photographs,” says Franck. “Back then, I used these photographs to paint from.” It was at that time, while studying at the Rijksakademie in Amsterdam, that in her studio she started to build the layers of her process. “At first I just showed the photographs, then I slowly started to show the objects inside the photographs next to the photographs.”

Yet while photography and installation are integral, it is the abstract quality of Franck’s work that hits you first, squarely in the face, with the gestural splashes across the walls in bright pastel colours. “They draw you in and also push you away again,” she says. The work A shift in focus (2012) is a piece of recycled plastic in a frame, yet, because of its colour scheme and abstract quality, it could almost be mistaken for a pastel-smudged painting by Franck herself. “I’m always interested in new materials, and this one struck my eye because of its painterly qualities – it’s a found painting from interior design.”

The exhibition feels quite domestic; smaller framed photographs hang on walls of thick brush strokes repeating like a wallpaper, and carpet rolls become surreal pieces of furniture. “It’s like an extract of an interior from somebody’s house,” says Franck. “Usually, I enlarge the photographs a lot more, so the objects in the photographs become almost life-sized, but for this show I decided to make them smaller because I like the way you receive the bigger things, and then have to move closer to look at these smaller images, creating a different physical engagement of the viewer.”

Carpet is another canvas for Franck. In Looking for loans in all the wrong places (2016), a carpet is draped over a trestle like a piece of furniture, and in La vie en rose cochon (2014), the carpet rolls down from the wall to the floor. Printed on the carpets are tomatoes and apples balanced on the abstract backdrop of a painting; the process of combining the two-dimensional with the three-dimensional has a strange flattening effect.

“It’s an object in another,” says Franck. “This transforming of my pieces has been very important in this exhibition. I’m very interested in keeping things open and trying to engage the viewer in this process of creating and questioning: ‘When does the image end?’

“I’m interested in blending the tangible reality and the abstract world, which is why I started to print the tomatoes on the carpet. That happened when I was living in the house [Franck had a residency in Luceberthuis, the former studio of the Dutch artist and poet Lucebert, in Bergen, the Netherlands] – the residency was so much about life  and living life in relation to art, and this is reflected in the works I made in that working period.”

The flattening effect that Franck creates by printing paintings on to carpets can also be seen in her use of shiny paper, over which she paints. “I was especially drawn to this mirroring paper, because when you paint on it, the paint seems to be situated somewhere in between the viewer and the support. The materiality of this mirroring paper is close to that of photographic paper. When presented next to each other, the distinction between the two becomes unclear,” says Franck.

“This is a photograph of a painting,” she says, referring to the work Of naked ground I (2015), which hangs in the gallery office. “You see the effect that the paint gives – here it keeps moving,” she points to a painting on the shiny reflecting paper, “but here it’s fixed,” she points to the photograph, where it is hard to tell where the paint stops and the reflection and shadow begin, because they are frozen into gesture.

“I’m not interested in interior design specifically: it’s more about the domestic and the feeling of something private,” says Franck. “I look at a lot of painters’ work, but I also look at photographs of painters in the studio – you know, the famous ones of Matisse, how he hung his cut-outs on the walls of his studio.

“When I worked in Lucebert’s studio for a residency – he was a CoBrA-related artist and poet – I used his house and studio as a setting for my work and went into a dialogue with the traces of his work. I stayed there for nine months, working within this very specific space.” Known simply as Lucebert, Lubertus Jacobus Swaanswijk (1924-94) created abstractly figurative paintings that were deeply expressive, and his studio space left Franck many possibilities to work with, hanging and layering her own works in the space and then photographing them.

This way of working is something that she intends to experiment more with: “I thought, after doing projects in the house of Lucebert and with the archive of late collector Wil Heins, it would be nice to go into dialogue with a living artist to look into his or her process. It’s a new idea, and I don’t know yet whether or not the artist should be present.”

The spaces Franck works in all have an intimate feeling: unlike a white-cube gallery, they bring their own history and impressions. The space becomes part of the work, another canvas, for her canvases. “The work is about opening up space, and space, and space again. I don’t make the narrative: it’s up to you, the viewer. Definite or clearly defined plans are never my starting point. I look for something more continuous. Perhaps that’s why I’m attracted to abstract art – it opens things up in my mind.” 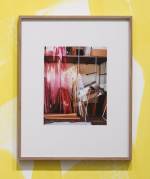 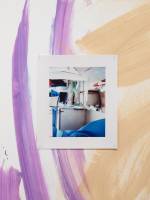 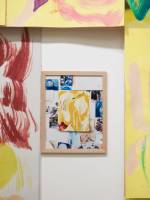 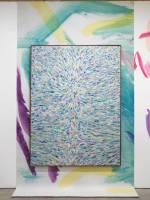 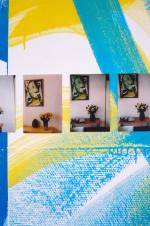 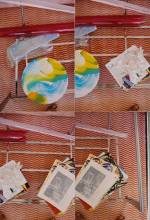