‘The work of Patrick Heron is bound up with what is probably the most crucial series of events in British art since the war: the impact of the new American painting, the absorption of its influence and, eventually, a reaction against it and an attempt to go beyond it. The fact that Heron is exceptionally articulate (having been one of the best English art critics of the post-war period) means that his development can be followed stage-by-stage in a very clear way, which provides valuable insight into the development of recent British painting as a whole.’

Patrick Heron wrote a number of theoretical articles in Studio International in the 1960s, in which he vehemently denied Clement Greenberg's assertion that Abstract Expressionism was the product of New York alone. What particularly irritated Heron was Greenberg's assertion that British Abstract painting was ‘only landscape imagery in disguise’. Heron was one of the few artists in post-war Britain to experiment with abstraction in his art; his writings fuelled his experimentation, and his physical involvement in the making of paintings informed his writing. Heron's early abstract work combined the influence of Braque, Matisse and Soulages. His full conversion to non-figuration was in January 1956 when the exhibition at the Tate Gallery: ‘Modern Art in the United States’, showed the work of de Kooning, Motherwell, Pollock, Rothko, Tobey and Tomlin. He wrote at the time:

‘I was instantly elated by the size, energy, originality, economy, and inventive daring of many of the paintings. Their creative emptiness represented a radical discovery, I felt, as did their flatness or spatial shallowness. I was fascinated by their constant denial of illusionistic depth...’(1)

The exhibition at the Tate, St Ives (20 March — 3 June 2001) provides not only an opportunity to enjoy some of Heron's finest and most sensuous works, but also to reflect on various theoretical issues that he was committed to in the light of art historical approaches since then.

Heron's thrill at returning to Eagles Nest in Cornwall in 1956 was conveyed in a letter to Herbert Read in July of that year. ‘Here at last! I wish you could see the place in its Mediterranean brilliance of light and colour! Yesterday though, we were wreathed in mist all day: hot, steamy stuff which made the rocks and bushes into grey Chinese silhouettes…’ (2) As a child, 30 years before, Patrick Heron had spent a winter at Eagles Nest and had retained images of it in his imagination. Mel Gooding, Heron's biographer, accords Eagles Nest the appropriate significance in Heron's life as an artist, describing it as a ‘dream realized’. Heron immediately started on a series of abstract works that his experimentation of the previous period had prepared him for, ‘in which a figurative treatment of the subject had been virtually obliterated by a curtain-like succession of laterally-brushed rough verticals’. (3) Gooding describes the transitional paintings of this period as having a feel of crisis about them:

‘Their apparently arbitrary disposition of rough and inconsistent brushmarks, paint lines, dribbles and splashes activate the surface of the painting, denying spatial depth and insisting on texture. The smaller paintings made in the first weeks at Eagles Nest, mostly in the dimensions of the double square (90 x 45 cm), are more formally ordered. Taking their cue from the format they are mostly composed of vertical strokes parallel to the canvas edge. They are painted in a variety of methods, each one different. In some the canvas is completely covered, with thickly opaque slab-like strokes laid over a painted base; in others the verticals are more lightly laid on with a turpentine — wet brush, leaving trails of vertical dribble, to create a kind of veil over the white primed canvas; in some there are horizontal marks across the verticals’. (4)

Heron's first year at Eagles Nest saw an important transition in his work — very much however, a result of a long period of thinking and working. The influence of the environment — the actual place — was profound: ‘This is a landscape that has altered my life, the house in its setting is the source of all my painting’. (5) Heron's passion for Eagles Nest is evident in his paintings. The theory of abstraction, as an outstanding critic and writer on the subject of his own painting make him an exceptionally interesting and challenging artist. But it is primarily the great love and enthusiasm for place, and therefore for life itself which that place epitomises for him, that the 1956 ‘Garden paintings’ exude. ‘All day there is the sound of the wind in the trees that is so like the sound of the waves of the sea…Wind that blows away the light of day and reason with it’. (6) Some 30 years later Heron painted Eagles Nest again with a renewed vigour, following a hiatus in his work after the sudden death of his wife Delia in 1979. Delia had been his constant companion, and a perceptive critic of his work: together they had transformed Eagles Nest into an inspiring home and workplace.

‘Early and Late Garden Paintings’, at Tate, St Ives, provides an excellent position from which to view Heron's long and brilliant career. By taking two groups of paintings that take their cue from the marvellous environment at Eagles Nest, separated by 30 years in time, it is possible to view Heron's development as one of Britain's most important painters. Then to observe the dramatic effect of a new environment, Sydney, on his work in the late 1980s is also a great experience. I would, personally, have liked more Sydney paintings in the show just because they are to me some of Heron's finest works, and perhaps the finest abstract paintings of Sydney ever painted that allude, not just to the dramatic beauty of Sydney and its glorious colours, but to the journey in physical and spiritual terms that Heron captures so poignantly by exploratory and celebratory means.

Patrick Heron had been interested in abstraction from 1945 when he published his first article, and apart from Herbert Read ... ‘there was no other critic in this country who had engaged so deeply with the problematic relations between figuration and abstraction’.(7) Heron's knowledge of theory and artists is evident in his writings which Mel Gooding describes thus:

‘Heron championed the abstract painting of his contemporaries in England with an enthusiasm of the eye and generosity of spirit, supporting his judgements with sensitive and subtle formal analysis of their work, throughout the period when he had remained convinced of his own need, as a painter, of “that troublesome entity, the subject”.’ (8)

One of Heron's greatest contributions was the way that in the late 1940s he wrote with the sensibility of a painter on the French modernists, Braque, Matisse and Bonnard. With Bonnard he had a particular affinity, and as early as 1947 wrote of an 'alloverness' in which 'the forms of objects in a picture … hardly exist in isolation from the total configuration'.

‘We may best conceive the underlying abstract rhythm in Bonnard if we think of a piece of large-scale fishnet drawn over the surface of the canvas. It is through an imaginary structure of loose connected squares — sometimes pulled into oblongs and sometimes into diamond shapes — that Bonnard seems to look at his subject. I'm not suggesting that he makes a conscious mental manoeuvre of this kind. My image of the netting is simply a device for interpreting Bonnard's mode of vision, which is unique.’ (9)

As writings on the American Abstract Expressionists by Patrick Heron reveal, the painter was indebted to the work of Jackson Pollock and his contemporaries for the many lessons he learnt. But Heron refused to be categorised by Clement Greenberg, who had effectively become the spokesman for the American movement. His critical formalism was patronising in the manner in which English Abstraction was addressed.

‘The intuitive discovery of the image in the act of painting itself, that poetic empiricism that was typical of much of the best abstract painting of the post-war period, gave it an expressive variety and range of pictorial invention. This was quite the opposite to the centred symmetrical format, and the serial and systematic repetition of motif and device, that were typical of those American painters of the 1960s so admired by Greenberg for their renunciation of virtuosity’ (10)

At the ICA in 1970, Patrick Heron delivered a lecture entitled ‘Symmetry in painting: an academic formula’. For three hours Heron spoke of the international promotion of American painting and criticised mechanical painting. He also criticised British critics for ignoring the middle-generation of artists. Heron emphasised the necessity for the ‘hand-stroked, hand-scribbled, hand-scrubbed application of paint’. (11) The individuality of the hand or brush mark was of paramount importance.

Through all of Heron's writings and paintings one experiences the vitality of painting and the value of it. He believed that there was a tendency for recent critics to ignore painting’s ‘birthright’:

‘Painting has jettisoned its birthright, which is the imaginative interpretation of the infinitely suggestive, infinitely complex texture of reality; the reality of the eye. Painting…is no longer a window through which we may see familiar sights, but see them afresh because they have been distorted, and given a new emphasis, twist or accent by a process that is one of translation, not reproduction. Instead, the function of painting is now more comparable to that of a cinema screen upon which images are projected…out of a man's dark mind’ (12)

There is a complexity and determination in Heron's work that comes about through his zealous role as critic and his articulate description of the creative process. Above all, ‘Patrick Heron: Early and Late Garden Paintings’, enables the appreciation of sensuous and highly accomplished, painterly works from one of Britain's greatest masters. 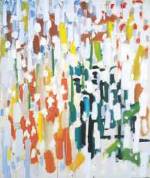 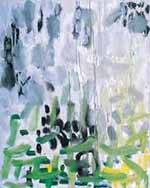