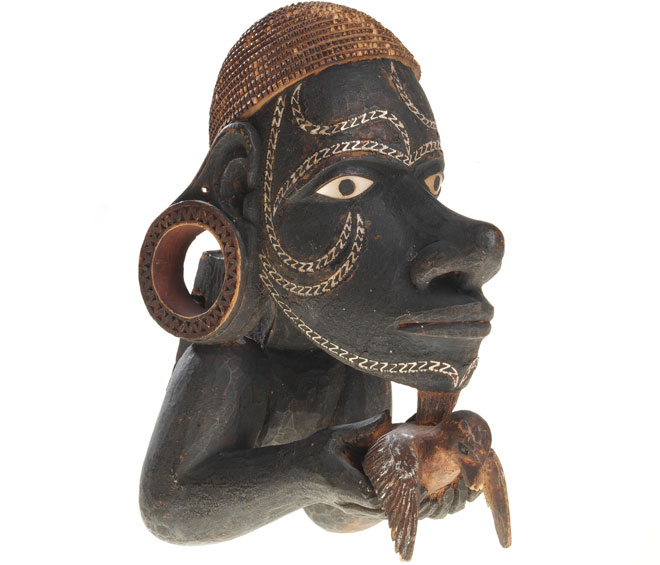 Rather than start at the beginning, with a room-by-room account of why this is such a moving and captivating exhibition, let me start by trying to describe to you the sensation of sitting, totally transfixed, in front of Lisa Reihana’s large-scale video installation In Pursuit of Venus [Infected] (2015-17). Reihana represented New Zealand with this work at Venice Biennale last year, and it takes its inspiration from an incredible (and highly romanticised) wallpaper design by the French painter Jean-Gabriel Charvet. Les Sauvages de la Mer Pacifique (c1804) was loosely based on Captain Cook’s accounts of his voyages in the South Pacific as he and his crew charted the path of Venus across the night sky. The series of images – all done with woodblocks – are beautiful, if also a rather absurd neo-classical take on peoples of the region. But Reihana transforms Charvet’s designs and breathes life into them, populating the Frenchman’s backdrop with actors playing out encounters between the diverse island populations and the British navy.

These encounters brought irreversible change, disease, abuse and fighting, but began with curiosity on both sides. Reihana’s actors play out gift and information exchanges and demonstrate the fragile alliances that were forged in the beginning. But tensions flair in this idyllic landscape of verdant palm trees and glittering seas, as violence and misunderstandings gain momentum. Eventually, the desperate Captain Cook is shot dead on a beach as he tries to kidnap a Hawaiian chief. Music and barely audible dialogue gently steer our understanding of these tableaux vivants, but the visual impact is what keeps us transfixed, the contrast between skinny British redcoats and statuesque Maori warriors, and the feeling of watching something unravel. It is like being a sort of time tourist, passing through, seeing everything at an objective distance with the lessons of history ringing in your ears. 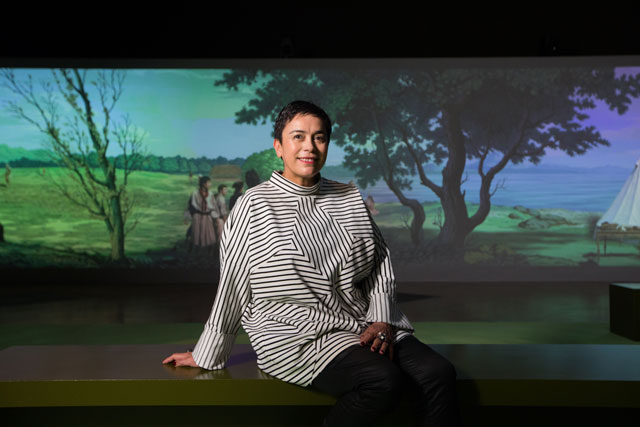 With these scenes playing as after images in my mind’s eye, I moved into the next gallery, a room dedicated to remembrance and mourning. Reihana’s work ­– the screams and haunting music from which drift in through the door behind me –makes the theme of remembrance seem all the more pertinent. The first item, the first thing I see in this dark room, is a malangan sculpture. These were associated with funerary ceremonies that marked the deceased’s final transition into the afterlife, several years after death. This one takes the form of a painted fish with boars’ tusks protruding from its huge mouth. Its eyes are narrow and black; smaller fish bite on to its fins, hitching a ride, as remora fish do with sharks, and a human figure is attached to its long tongue, which curls up over its back. Suspended in a spotlit case, a fusion of the real world and the journey into the next, it has a tangible power. 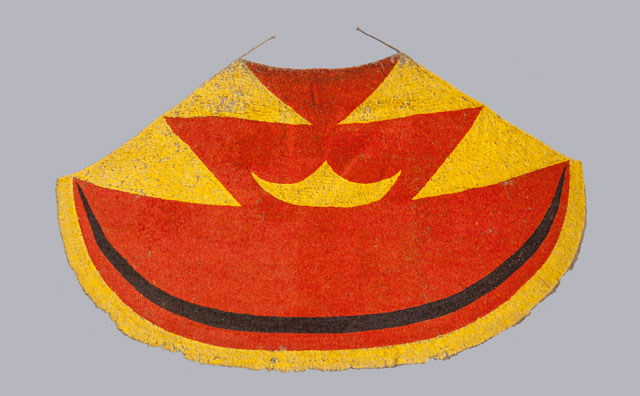 Some of the artworks on display here seem strange, frightening even, and that’s no bad thing. The curators have worked hard to make these objects vital and dramatic, to demonstrate their continued relevance, rather than consigning them to the dusty annals of history, which, as Reihana demonstrates, is being continually re-examined and scrutinised by contemporary Pacific artists. There is evidence of a ceremony performed before a vitrine containing a human skull, which bears testament to the continued connection with the ancestors. People from all over the South Pacific flew in to be at the opening of this exhibition, to bless sacred items and to pay their respects to the wooden emissaries that have made the journey to other side of the globe.

That the peoples of Melanesia, Micronesia and Polynesia successfully populated the scattered islands of the vast Pacific Ocean has seen them crowned history’s most accomplished navigators. And, not surprisingly, Pacific culture is intimately linked to the sea. This point is made at the beginning of the exhibition, in a room of delicate canoes and ivory fishing hooks that look too beautiful for use, and carvings, which show the sea viewed from above, with seagulls paddling above the backs of fish. Nature permeates everything. 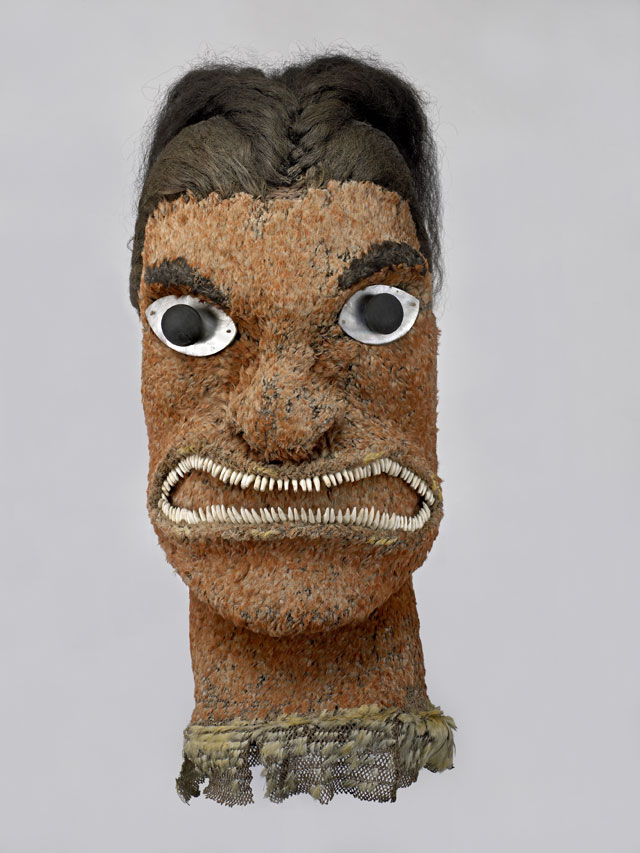 In these galleries we are confronted with faces, too – the faces of gods and mortals. The iconic Hawaiian “feather heads” are here – great grimacing structures with human hair and mouths full of dogs’ teeth. There are more pared-back sculptures as well, and what is clear is that, long before abstraction was gripping the avant garde in Europe, Pacific artists were creating the elegant forms that would fuel Picasso throughout his career. The sophistication of some of these figures, with blank, shield-like faces, save the hint of a nose, or slender limbs protruding from angular bodies, make them look startlingly modern, while others are cruder and intentionally funny. One panel tells the story of a woman, who, dissatisfied with her husband, sends him across the sea to seek out a man with a larger penis. 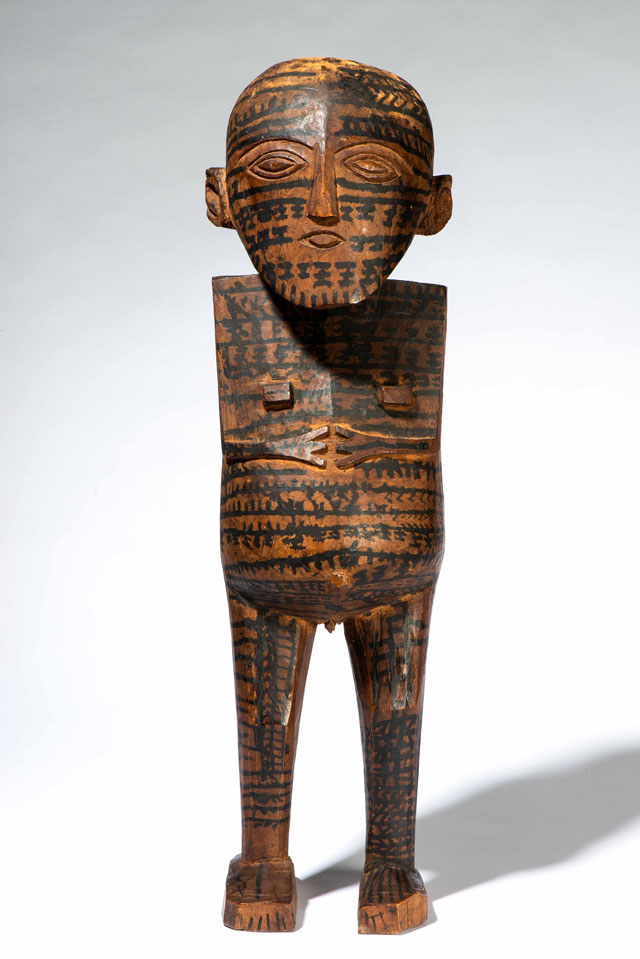 Fiona Pardington’s The Pressure of Sunlight Falling brings the faces of the past back from obscurity. She photographed life casts of islanders, made by phrenologist Pierre-Marie Alexandre Dumoutier in the 19th century, and by doing so transformed European ethnographic curiosity into new portraits of the ancestors. These faces look eerily alive. They are strong and handsome, a tantalising glimpse into lives past. The cast of Matoua Tawai, a Maori man whose likeness was captured all those years ago, is lit in the photographer’s studio so that every gentle gradient of his face is described, even the curling troughs of his tattoos. 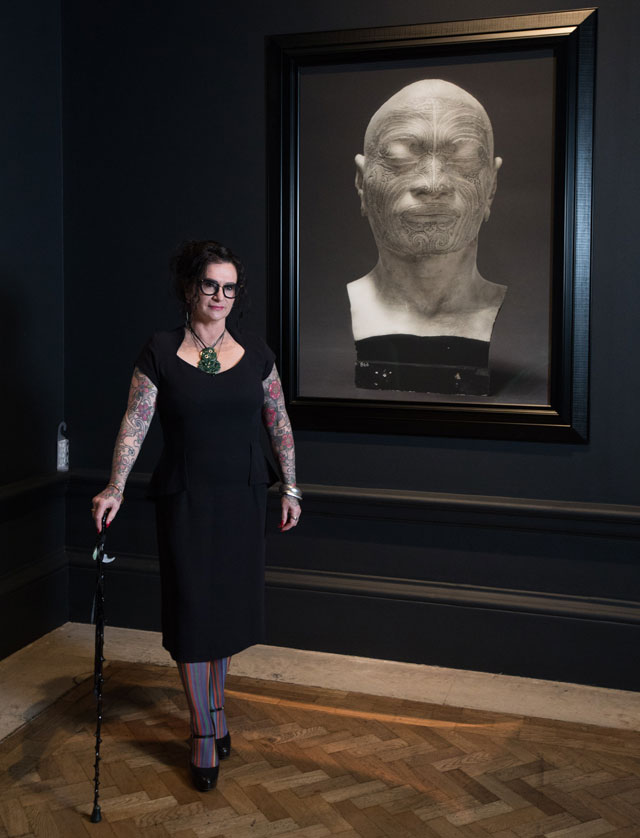 Fiona Pardington, in front of Portrait of a life-cast of Matoua Tawai (The Pressure of Sunlight Falling series), 2010, in the Memory and Commemoration room, Oceania exhibition, Royal Academy of Arts, London, 29 September – 10 December 2018. © courtesy of the artist and Starkwhite, New Zealand. Photo: David Parry.

There was, and still is, the curators are keen to reminder us, a two-way exchange between Europeans and the varied cultures of the South Pacific and that the art of the past is seamlessly combined here with the art of the present, is one of this exhibition’s triumphs. It also serves as a reminder that the cultures represented here are not consigned to the past, that they are not dead and gone, or static – any more than is the case in Europe – but continue to evolve, to re-evaluate their histories and to produce truly captivating art.