Next month (September) should have seen the figure of St Peter suspended face downwards between two Doric pillars which flank the lost altar of St Peter's Church in Liverpool, once the Catholic church of the Polish community in the city and now a venue for the Liverpool Biennale

Carved in polystyrene, and held in position by bands of red fabric, the figure was installed in March when it called to mind St Peter's role in building the Catholic church and the current precarious state of religion. The installation was a dramatic reinvigoration of the interior of a building which, built in 1788, has sadly outlived its original purpose. Commissioned for the Biennale, the installation titled Tu Es Petrus, was by the Maltese artist, Norbert Francis Attard.

St Peter is, of course, a distinctive figure in the history of Catholicism in Malta and it is interesting to observe the artist making connections between his own culture and the location of this installation in Liverpool. However, because the director of the Biennale decided to give St Peter's Church to another artist, Attard's installation had to be removed. Instead, he was given The Oratory close to the Anglican cathedral where he has created another installation called Beyond Conflict. Here, Attard has woven red and green fabric bands between the columns on the outside of the building in a way that seems to both emphasise and reduce the scale of the facade. Obvious entry to the building is denied.

This is the third in a series of installations created in Britain this year by Attard, who although correctly described as an artist, is in fact an architect, printmaker, painter, photographer and sculptor whose latest preoccupation happens to be installations. For this year’s Edinburgh Festival, for example, he created a piece called Love Is All There Is within glass panels in the rear wall of the Metro Bar in the Apex Hotel. The panels contain many words in red — words like powerful, vibrant, Red Box and Red Giant — which streamed across the panels like messages on a computer screen. One might read this as a piece of contemporary grafitti broken up in one area by a thick, red diagonal bar with more words, only this time reversed in white, and in another by a triangular feature containing larger, handwritten words such as Violence, Revolution, Love and Hate. The installation was, in fact, multi-layered and the diagonal bar was placed in front of an invisible window so that the reversed lettering came to life when the sun came out.

This installation — and that created in St Andrews earlier this summer — rely on text and the colour red to communicate passion and intensity. In the St Andrew’s piece, One Extreme to Another, Attard utilised a simple vocabulary of form accompanied by text created by students at St Leonard’s School. Bands of white fabric were suspended between two sycamore trees supporting a table and a computer keyboard, and were embellished with words that seemed to gather speed as they streamed towards the table and keyboard before passing out into the ether. Serenity and passion, nature and artifice — the life force expressed by the garden and its trees — all work to demonstrate how Attard’s installations are specific to their location. They are also open to different interpretations and meanings. From afar, the installation looked taught and rigid, an ideal medium for the transmission of words. But close up, the fabric was full of life, its edges trembling in the wind. Perhaps this signified Nature itself trembling on the edge of an abyss.

Attard’s installations date from 1996, the year when he decided to give up his career as an architect working in Malta and Gozo. Now Attard works internationally and indeed has exhibited his paintings in many different countries. However, his seminal influences arise from his Maltese background though much of his inspiration may come from elsewhere. Trained as an architect — not as a painter — he acquired his art education from books and from local people, including his uncle, Frank Portelli, a pioneer of modern art in Malta, and Victor Pasmore, who settled in Malta in the 1960s. Thus paintings and drawings done in the 1960s echo the work of Picasso, Mondrian, Klee, Giacometti and Pollock, and are remarkable for their virtuosity. Indeed, Attard tells me that he finds creating things far too easy. Maybe that is why he has changed his medium at regular intervals throughout his life.

The early work, often depicting women (in one case, with the simplicity of line of Eric Gill, in another using line as if it were a computer print out) was followed by the much more colourful images of the 1970s. These included exotic views of the Gozitan landscape (normally characterised by the sandy brown colour of its soft, globigerina limestone, the island can burst into colour with Spring flowers). And the landscape often featured the sinewy meanderings of a slender snake. In these paintings, Attard seemed to throw off outside influences and revel in bursts of life and renewal, but in the series of drawings, etchings, lithographs and silkscreens that followed (from 1977—87), an outside influence in the form of Escher returns. Suddenly, the joy of the previous work is replaced by meticulously drawn hilltop towns with labyrinthine walls and inner streets peopled (when they are peopled) by minute figures who are completely dominated by their environment. And, in most cases, the towns are in monotone or in very soft pinks, browns, greens and blues. They are often abandoned, isolated and claustrophobic. They also reflect the way in which Gozo’s hilltop villages seem to grow out of the stone of which they are built and are full of narrow streets. Some images, indeed, make direct references to the island by incorporating photographs of the church in Gharb or the saltpans outside Marsalforn.

The early 1980s saw difficult years for Attard, during which an emotional crisis was signalled by what have been described as his breakdown ink drawings — 45 images reflecting despair and helplessness which, artistically, make references to Picasso’s Vollard Suite. The period also includes the very tranquil lithographs and screenprints known as the Mihrab, Kimono and Mandela Series. Reflecting Attard’s interest in Zen Buddhism and his travels in the Middle East, the very simplified abstract shapes, or shapes based on the kimono, are also notable for their soft hues (some, in fact, repeating the colours seen in some of the images of the Walled Cities Series). As the artist says of the mihrab (the decorated slab used in a mosque to point the way to Mecca), ‘In it, I found the ideal form to convey what I felt. It suited me for many reasons. It was a doorway. It pointed upwards. It was architectural’.

During the first half of the 1990s, Attard continued both to suggest the turmoil of inner life in watercolours depicting the chaos and constant regeneration of the cosmos, and the excitement of a new chapter in his life as shown by works in acrylic on canvas that have titles such as Love At First Sight and The Radiant Present. Both their colours and abstract shapes have an affinity with Kandinsky’s work of the early 1920s. By the end of this period, however, Attard realised that there was no reason why his work should remain two-dimensional so, in 1997, constructions began, often reflecting on man’s relationship with Nature — and his increasing divorce from Nature.

One, called Accumulations, consisted of a series of black plastic bags within square wooden frames (an aesthetic use of mundane materials). Stretching along a couple of metres of wall, it is a piece of sculpture that could also be described as an installation.

Attard is an artist whose roots remain firmly in Malta and Gozo while he works in several continents. His own country offers him specific locations. The art centre, St James Cavalier in Valletta, was the setting for a poetic evocation of space using nine slide projectors, a swinging pendulum containing a video monitor, candles and torches which celebrated the work of Mattia Preti, whose paintings are in the nearby St John’s Co-Cathedral where many of the Knights of St John are buried. And, last month, Attard completed an experimental work in a tenement in the centre of Valletta: a recreation of a beach, a location associated with the natural world that was situated within the built environment. As visitors cleared away the ‘sand’ with their feet to read obscured quotations from Alan Botton’s recent book, The Art of Travel, there was an olefactory revelation - the sand was not sand but sawdust, the detrious of a built environment. This installation was about things that were not what they seemed. As always with the work of Attard, the installation had a multiplicity of meanings. 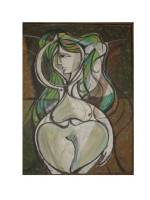