The Museum of Modern Art in New York reopened its doors to the public on 20 November 2004. On a wet and cold day the lines wound all around the block as thousands clamoured to get a chance to see the results of a three-year, $425 million reconstruction directed by Japanese architect Yoshio Taniguchi. Hours later, the queues finally arrived at the main entrance on 53rd Street, between Fifth and Sixth Avenues. The desire to see the remodelled museum was enhanced by free admission on opening day, waiving the new $20 charge.

Being New York City, there could not be an event without a protest. A few people paraded outside carrying 'BURN MOMA' signs, all dressed in black with their faces covered.

MoMA was the first museum dedicated to Modern Art. The museum was founded by Abby A. Rockefeller, Lillie P. Bliss, Mary Quinn Sullivan and others: wealthy, cultured women who saw the need to house the works of the modern art movement. It was 1929 when MoMA began as a six-room rented space at the corner of 57th and Fifth Avenue. Later it moved to the present site, at that time a townhouse on 53rd Street; later Philip L. Goodwin and ED Stone designed a new museum at this location. In the 1950s, Philip Johnson designed expansions, and in the 1980s a west wing designed by Cesar Pelli & Associates was added. In 1995 with the acquisition of the Dorset Hotel, next door, the museum site grew to its current size. Director Glenn Lowry worked with his well-connected board, the City and the State of New York to amass million of dollars for the reconstructions. The museum began its reconstruction in August 2001.

Yoshio Taniguchi won the competition to rebuild MoMA. First, ten architects were invited to make proposals; the 1997 'Toward the New Museum of Modern Art' exhibition displayed their submissions. From this group, Jacques Herzog & Pierre de Meuron from Switzerland and Bernard Tschumi from the US were the other two finalists. For Yoshio Taniguchi, this was his first international project outside Japan. His other museum projects are the Toyota Municipal Museum of Art, the Marugame Genichiro-Inokuma Museum of Contemporary Art, the Shiseido Art Museum, Higashiyama Kaii Gallery in Nagano, the Centennial Hall in the Kyoto National Museum, the Gallery of Horyuji Treasures at the Tokyo National Museum, The Ken Domon Museum of Photography in Sakata, and the Higashiyama Kaii Museum in Sakaide. His environment-friendly and non-imposing structures are designed to fit seamlessly with the surroundings; they complement the artworks and enhance the viewer's perspective. He states ‘The primary objective in the design of a museum is to create an ideal environment for the interaction of people and art' and this is certainly the case with the new MoMA.

While MoMA was being reconstructed its collections became travelling exhibitions. Some went overseas (for example, 'Modern Means: Continuity and Change in Art, 1880 to Now', which ran from 28 April – 1 August 2004 at the Mori Art Museum, Japan, but most were exhibited at a temporarily-created museum in Queens, New York. MoMA Queens, a one-floor gallery space, was well attended from the start. Its exhibitions included ‘Matisse Picasso', a comparison of the works by the two masters who learned from each other, the 'Max Beckmann' exhibition in 2003 and ‘AUTObodies: speed, sport, transport' in 2002, among others.

The design of the new MoMA is elegant. Spacious galleries invite the public and embrace all the beloved favourites. Six large floors of space display works as small as Frida Kahlo's 'Self-Portrait with Cropped Hair', 15 3/4 x 11 inches to James Rosenquist's enormous 'F-111', 10 x 86 feet. The walls are in the same shade of unifying off-white, and the floors are wooden to afford the visitors more comfort.

Entering on 53rd Street, the visitor is drawn towards the solitary figure of Balzac by Rodin, which imposingly stands in front of the Sculpture Garden, a much-missed outdoor haven in the city. Up one short flight of steps is the huge atrium, where the Barnett Newman 25-foot steel ‘Broken Obelisk' sculpture dominates the space. Beyond is Claude Monet's 'Water Lilies', c.1920, painted in 3 sections that now hang side by side as the artist wished. Previously MoMA did not have a large enough wall, and they were displayed in a semi-circle. However, this is one of the few unsuccessful relocations. The new space is too large and diminishes this ravishing painting and even the colours seem dull and dark.

Go straight to the fifth floor if you want to see the most important of MoMA's holdings. Vincent Van Gogh's 'Starry Night' is here, and his 'Portrait of Joseph Roulin'. Pablo Picasso's 'Les Demoiselles D'Avignon', and his 'Boy Leading a Horse' stand out. Many works by Cézanne, Seurat, Gauguin, Rousseau, Munch, Derain, Braque, Degas and others are all displayed here. One gallery is devoted to Matisse.

The bronze 'Backs' by Matisse are in another gallery, not together, but rather facing each other on opposite sides of the room. It was easier when they were side by side as previously presented in the Sculpture Garden to visually compare the progression from realism to abstraction.

It was decided that the reinstallation should group art movements together in galleries, but there are no doors and through wide openings the cross-pollination of a particular era is illustrated. For example, Russian Constructivism and Dadaism overlap around the time of World War I, and it is interesting to see the juxtaposition of Mondrian, Miró, Brancusi and Duchamp - the latter two were the best of friends but their polarisation of ideas is clear when Brancusi spent months working on his sculptures, yet nearby is Duchamp's bicycle wheel that he set upon a block and declared instant sculpture. Next come the Surrealistic works. A gallery is dedicated to the Futurists, of which MoMA has the largest collection outside of Italy.

The galleries are all slightly different sizes to give variety, and to keep the specific art phases in place. The architect proposed the spaces and the director and curators worked out how to fit the art to the spaces. Each gallery is named, and each required a hefty donation, the most generous donors being assigned the largest galleries.

The curators had only two months to make the installations but, knowing it would be an impossible task, they began making preparations 18 months ahead. To check on the sculptures, life-size cardboard models were tried in various positions in the temporary facility. Large-scale models of the galleries were made and scale-size paintings were moved around. Thus, very few alterations had to be made when the installation began in September 2004. Of about 30 galleries, only two had to be completely rethought.

Traditionally MoMA kept the labels spare and as unobtrusive as possible. In the hiatus they decided to loosen up, and to put some paragraphs of explanation beside the works. But by the time this was decided, there was time only to do a few important ones. In future everything may have longer labels.

'The Dance' by Matisse has caused some controversy by being installed at the top of a staircase. However, the unstable setting accentuates its essential movement. Also, the curators had precedent to call on. This is a study for the painting in the Hermitage, and used to hang over the staircase of a Russian home.

Moving down from fifth to fourth floors, there is a shift from Paris to New York, and to the period after World War II. Here are the great Jackson Pollocks, Barnett Newman's huge red 'Vir Heroicus Sublimis', Mark Rothko, Clyfford Still, Franz Kline, Willem de Kooning's 'Woman I'. Around 1955, Jasper Johns, Robert Rauschenberg, Cy Twombly are represented. The museum was already strong in Johns, but has recently added one of his greatest works, 'Diver', 1962-63, a charcoal drawing mounted on canvas which has foot-prints on the top and hand-prints at the centre and bottom (looking like a skull), it takes the viewer to the depths of the self-diving to death. It is said to pay homage to the poet Hart Crane, who dived to his death from a ship.

So many movements began in the 1960s. The International Movement introduces Frank Stella and Yves Klein. Also Pop, dominated by Andy Warhol's 'Marilyn' and his wall of Campbell's Soup Cans, plus Roy Lichtenstein, Ruscha, Rosenquist, Helen Frankenthaler, and a fine Romare Bearden collage. There is a Conceptual gallery (John Baldessari's enigmatic writing) and Minimalism at the end of the 1960s, with Kenneth Noland and Donald Judd. One of the Op artists is Bridget Riley. MoMA has been criticised for not including many women artists but the museum is trying to catch up now with new purchases.

The third floor is for architecture and design, drawings, photography and special exhibitions. There exists such incredible depth in the collection of drawings and prints, that during the first year there will be three changing instalments. One can see many types of chairs, furniture, Vincent HRD Series C Black Shadow Motorcycle, the sleek Cisitalia 202 GT Car, MTA New York Subway Signs, and of course the 1945 Bell 47D1 Helicopter.

Apart from the atrium the whole second floor is for Contemporary work, most of which is also newly acquired. The old MoMA had very little room to show such pieces, some of which are quite large, but here the 22 feet ceilings and open floor provide an enormous space. In future, as it becomes clear which movements and artists are most important, this floor will also be divided into galleries. The permanent Contemporary collection, which includes the 1970s to the present, will rotate every nine months, because the curators want to be less selective and show as much new art as possible. The 1970s saw a challenging of the status quo, and rejection of anything which smacked of tradition in art (such as paint brushes). A piece from 1974 is 'Bingo' by Gordon Matta-Clark, who carved out bits of extant buildings (sometimes the work of art was the building minus a piece he removed). For 'Bingo' he took sections from a house in Niagara Falls (like a Bingo game), and reassembled three of eight in its present configuration.

A recently purchased Rachel Whiteread white plaster piece depicting the air in a room is shown. Sometimes, she makes a cast of a real room, for this she specially built a generic room in her studio (in Berlin at the time). Matthew Barney is represented with 'The Cabinet of Baby Fay La Foe', 2000. The sculpture on glass 'Modernity, Mirrored and Reflected Infinitely' by Josiah McElheny, a display of Mirrored blown glass, aluminium, in a mirrored wall box with a two-way mirror at the front, is a crowd pleaser.

The sixth floor will be for temporary exhibitions. At present, the space is hardly delineated with walls, and thus the huge 'F-111' by Rosenquist (made up of 23 sections) and Ellsworth Kelly's 'Sculpture for a Large Wall', are installed and look wonderful. But after an initial period these will be removed to storage, because surprisingly they will not fit anywhere else (what a shame the walls of the atrium are not long enough). Also here are a few other large pieces, Chuck Close's 'Self Portrait', Alex Katz' 'Lawn Party' and Francis Bacon's 'Triptych', and some extraordinary photographs taken by German artist Michael Wesely while MoMA was reconstructed.

Besides the few shortcomings, which can be solved in the future, the museum is completely transformed. The space, the arrangement of the galleries and connecting hallways with views through internal and external windows to the atrium, the Sculpture Garden and parts of NYC, gives the visitor an unforgettable experience, as if one was part of a painting or a play, the architecture in a sense is truly transparent, and in giving the artwork centre stage, it becomes a work of art. 'If MoMA is the cup and the artwork is the tea, I want people to say how good the tea is and not how nice the cup is' said Yoshio Taniguchi recently in an interview. 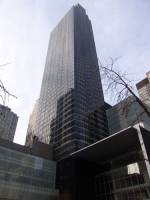 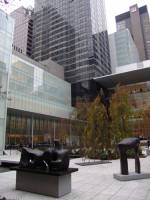 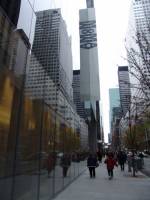 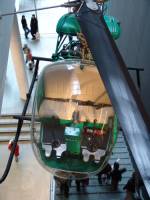 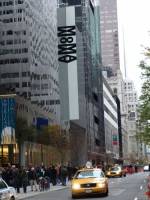 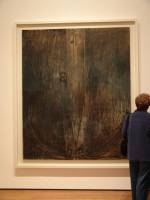 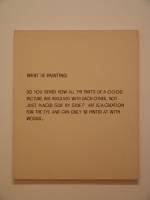