To accompany the exhibition Max Beckmann, a collaboration between the Centre Pompidou, Paris, Tate Modern, London, and The Museum of Modern Art, New York, running from September 2002 and September 2003, Tate Publishing has produced four publications.

Following the logic of this touring exhibition, two out of the four publications are devoted solely to the work of Max Beckmann, one of the leading European artists of the early 20th century. The other two illuminate, through collections of key polemic texts, creative writing and poetry, the movement of German Expressionism, with which Beckmann has been partly associated even though his creative venture owed as much to the Neue Sachlichkeit and remained always highly individualistic and singular. They focus on the intense cross-fertilisation between the visual arts and literature in this ideologically and stylistically heterogeneous movement.

The extensive and well illustrated catalogue Beckmann is the first comprehensive English language publication on the work of the artist for almost 20 years — there is a separate catalogue for the French part of the show edited by its curator Didier Ottinger. It is motivated by the perceived need to reassess and do justice to the intensely layered images, metaphorical writings and the complex personality of the German artist, based on new international research. The authors, include Sean Rainbird and Robert Storr, Senior Curators at Tate, London, and MoMA, New York, respectively, and organisers of the exhibitions there. They draw on documentary material published over the past decade to reposition Beckmann within the context of the manifold and diverse creative and intellectual currents of his time. The collection of thematic essays, organised along a biographical pathway through the artist’s work, seek to reassess his aesthetic achievements in view of contemporary cultural concerns. Two related aspects of Beckmann’s work are highlighted in particular: the first, an exploration of the potential of traditional painting to engage with an increasingly complex and uncertain reality through the means of collage — in terms of disparate pictorial spaces and formal elements, and multifaceted, ambiguous symbols; the second, an aesthetic strategy that transforms the ‘passive spectator’ into an ‘engaging participant’. The latter is, as Storr argues, realised by Beckmann through the ‘dialectical image’, in which ‘antithetical’ elements are juxtaposed within a complex, often dense and extremely tense pictorial structure that — in its ruptured stasis and deliberate polyvalence - hovers on the verge of implosion. The striking parallels with developments in the theatre of Brecht and Piscator are briefly pointed out. However, this fascinating and crucial aspect in its didactic as well as performative dimension would have certainly merited more attention in the publication.

Formal and semiotic contradictions are often drawn out to the full in Beckmann’s work. They often reveal the artist’s agony in the face of extreme individual and collective suffering. The publication allows us to reconsider Beckmann as a potent ‘father figure’ for contemporary artists, who seeks to innovate representational visual art, despite the fact that his direct influence on other artists of his own time and of later generations, especially outside of Germany appeared to be relatively small. In Germany, Beckmann remained an influential point of reference; and it is in this respect that the Anglo-Saxon viewpoint of the publication becomes dominant. Storr’s discussion of the ‘Beckmann effect’ looks to the work of later 20th century artists like Jörg Immendorff and Philip Guston. However, as one of the stated aims of the publication (and exhibition) is to re-approach Beckmann, this argument in particular could have been given a stronger currency by including examples of more recent generations of artists, for instance the German painters Neo Rauch and Norbert Bisky, who share with Beckmann the conviction that figurative art remains a valid and powerful medium of signification. Their painting displays a strong affinity to Beckmann’s pronounced strategy to cite and appropriate the symbolism and rhetoric of art historical precedents that appears at odds with contemporary sensibilities. Like him, they use such a ‘move’ to articulate, through those incongruities, their critique with poignancy. They also use saturated irony about contemporary society, which is marked increasingly by complexity, conflict, and crisis, a society which in their view seems ‘out of balance’. However, Leon Golub and Ellsworth Kelly talk in a short text each about the specific influence Beckmann exerted on their own visual work.

The layout of the catalogue appears to emulate the non-organic unity of Beckmann’s pictures. His ‘staged’ collage of picture planes, motifs and overlays of figures or figure fragments, is given an odd and unnecessarily disruptive resonance in the way the main critical essays (marked through their positioning in the upper two thirds of a page) are injected with a shorter text by a different author (taking up the lower two thirds of a page), which focuses on a specific aspect or particular (group of) work. For instance, in order to follow Didier Ottinger’s wide-ranging discussion of the artist’s intellectual fermentation process in Beckmann’s Lucid Somnambulism, one has to leap from page 144 to page 149 or continue with Golub’s text.

Overall, the range of essays brought together in this catalogue are purposefully enriched by a number of concise formal analyses of main (groups of) work, including Hell, a portfolio of ten transfer lithographs and a cover made in 1919 in response to the November Revolution of 1918. The substantial illustrations, in conjunction with the texts, place a strong emphasis on the profound influence that the ‘New Objectivity’ of the late 1920s and 1930s asserted on the artist, rather then overstating (as is usually done) the expressive qualities of his work. The varied contributions provide a vivid insight into the life and work of the artist, and stimulate a renewed interest in his work from which vital impulses for further research may emerge.

On My Painting is a republication of one of the most important written statements by Max Beckmann. Produced as a speech, the first Beckmann gave outside of Germany, he explores his relationship towards the early 20th century European avant-garde, his own aesthetic vision and professional concerns. This small volume gives the reader a rare and convenient opportunity to recontextualise and consider for themselves the citations from this statement made in the scholarly exhibition catalogue Beckmann. Moreover, Sean Rainbird’s afterword makes an invaluable and overdue contribution to the history of the reception of modern, pre-war German art in Britain. He ‘excavates’ the political complexities that marked the organisation and reception of the much overlooked exhibition Twentieth Century German Art at the New Burlington Galleries in London in 1938, where works of artists defamed by the Nazis as ‘degenerate’ (including Beckmann) were brought to the attention of a British audience. The booklet has been thoughtfully produced in Neufville Digital’s rendition of Futura (2001), a type font originally designed by Paul Renner in 1928. Renner was a colleague of Beckmann at the Frankfurt Art School during that period. The typeface has retained much of its original functional crisp restraint and ‘eye-sweet’ clarity. It visually gives a modernist feel to Beckmann’s text.

Music whilst drowning is an exciting new anthology of German Expressionist poems, many of them newly translated. The editors David Miller and Stephen Watts, rather than drawing on existing compilations, have followed their ‘own concerns and emphases in the final choice of both text and translation’ (p.117). This slim volume succeeds in giving a concise yet representative overview of those highly gestural explorations of urban life and looming catastrophe. It is richly interspersed with examples of Expressionist graphic work, thus illuminating the symbiosis of creative writing and the making of images in the work of individual figures such as Beckmann, Kandinsky, Barlach, Schwitters or Schiele, and the fruitful personal and professional relationships between poets and visual artists overall.

The other anthology, Voices of German Expressionism, has been republished with some changes to the selection of texts and artists it contains (to include among others, Wassily Kandinsky) almost 30 years after it was first edited by Victor H. Miesel. The re-edited version kept to the threefold purposes that motivated the original compilation: to provide a ‘conveniently concise overview’ of key documents of German Expressionism; to sample the creative writing of major artists, who were either associated with this disparate ‘movement’; and to encourage future compilations which might be more ambitious and challenging in scope towards conventional(ised) perceptions of Expressionism, and in view of contemporary societal phenomena, attitudes and debates. However, already Miesel’s concept of Expressionism appears to be too broad. Notwithstanding the vivid debates among contemporaries of the early 20th century about the term, concept(s) and movement that Expressionism was supposed to embody, the editor has included a number of artists whose style would be more appropriately described as ‘expressive’ rather then Expressionistic, as in the case of social realists Käthe Kollwitz, Heinrich Vogeler, or the November Group including Walter Gropius. Although this admittedly abbreviated selection of artists’ voices reveals much of the atmosphere of this period of political uncertainty, social upheaval and existential survival, it seems a pity that, ‘in order to save space’ (and presumably to include more samples and / or a broader range of writing) the volume does not contain any illustrations. The lack of images becomes painfully obvious where works are referred to directly as, for instance, in the examples of Kirchner’s writing. The functionalist formula ‘less is more’ applies here unreservedly.

Taken together, these two anthologies provide a good source material on German Expressionism for the English speaking reader, suitable to stimulate a further interest in this very fruitful period of art in Germany, and to illuminate a specific cultural dimension and link in Beckmann’s œuvre. 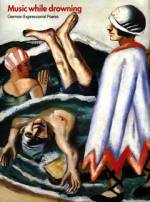