Masters of Venice: Renaissance Painters of Passion and Power from the Kunsthistorisches Museum, Vienna

Masters of Venice: Renaissance Painters of Passion and Power from the Kunsthistorisches Museum, Vienna

“Venice is a folding picture-post-card of itself … Nearly every Venetian is an art-appreciator, a connoisseur of Venice, ready to talk of Tintoretto …”1 In her well-known reflections on the city, people, history, and culture of Venice, American writer Mary McCarthy acknowledges that, even in modern times, the surviving legacy of Venice is inextricably linked with the legendary artists and artworks of its 16th-century High Renaissance period. Masters of Venice: Renaissance Painters of Passion and Power from the Kunsthistorisches Museum, Vienna celebrates the sumptuous splendour and advanced painterly achievements of these High Renaissance artistic giants.

Beginning with a potent blend of paintings and engravings by Andrea Mantegna (1430/1–1506) as an example of the purity of 15th-century Renaissance classicism, the exhibition showcases 50 paintings by famous Venetian masters including Giorgione (1477–1510), the “16th-century artistic triumvirate” of Titian (1488–1576), Tintoretto (1519–94), and Veronese (1528–88), and other prominent contemporaries such as Jacopo Bassano (1510–92), Palma Vecchio (1480–1528), and Paris Paschalinus Bordone (1500–71). In addition to their status as some of the finest examples of Venetian Renaissance painting, these 50 paintings, on loan from the Gemäldegalerie (Picture Gallery) of the Kunsthistorisches Museum in Vienna, also represent a selection of the most valuable works collected by the imperial Habsburg dynasty throughout the 17th–19th centuries. Seizing upon an opportunity in which the pieces were temporarily not installed in Vienna, the de Young Museum gained permission for these master paintings, many of which that had never been seen in the United States, to be shown in San Francisco from October 2011 to February 2012. The first major exhibition of Venetian Renaissance painting in the United States occurred at another of San Francisco’s art museums, the Legion of Honor, in 1938. It seems very fitting, then, that this prized collection of masterpieces from Venice, should be displayed in San Francisco, this nation’s very own ‘modern seaborne city whose citizens are equally susceptible to the sensual delights offered by the natural environment’.2

Aside from the sheer magnificence and technical bravura of the paintings themselves, one of the most compelling aspects of the exhibition is the harmonious confluence of Venetian Renaissance artistic innovation with the history of one of the world’s greatest remaining princely collections.  Upon entering the exhibition, the viewer is presented with an introduction to the collecting activity of the Habsburg royal family over many centuries culminating with the opening of the Kunsthistorisches Museum by Emperor Franz Joseph I in 1891.  Before encountering any of the actual Venetian paintings face to face, one confronts a large-scale reproduction of the famous portrait of Archduke Leopold Wilhelm in his Gallery at Brussels (c1651) by the Flemish painter, David Teniers the Younger (1610–90), which features the early Habsburg archduke amidst walls teeming with his collections.  As one of the most important collectors of Italian art (specifically Venetian paintings) during the century that followed Venice’s artistic Renaissance, the archduke was largely responsible for acquiring a good number of the prized Venetian treasures in the Gemäldegalerie (Picture Gallery) of the Kunsthistorisches Museum.  In fact, nine of the paintings featured in the San Francisco exhibition are prominently depicted among the works showcased in the archduke’s portrait.  By seeing these miniature masterpieces replicated within the painting, viewers are primed to view the actual works in the following galleries through a veneer of this history of collecting and the opulent taste of an imperial connoisseur.

The paintings featured in this exhibition represent a variety of subject matter, from allegorical configurations of mythological figures to religious narratives intended to provoke intense devotion to poesie that celebrate amorous relations between ancient gods and mortals in idyllic pastoral settings.  More than half of the 50 paintings on view take the form of portraits featuring elaborately dressed individuals surrounded by various accoutrements that are emblematic of Venetian wealth and worldliness.  These portraits depict an assortment of significant figures in Renaissance society, such as Titian’s Isabella d’Este (1534–6), the Marchioness of Mantua, Jacopo Strada (1567–8), a famous antiquarian from Padua, Tintoretto’s Sebastiano Venier (and the Battle of Lepanto) (1571), the chief admiral of the Venetian fleet, also Veronese’s Lucretia (1580–83), Livy’s legendary Roman protagonist.  In each of these instances, regardless of their status, the individuals are represented in sartorial finery, flanked by their possessions, and staged with a dramatic sense of lighting that illuminates and ennobles each face in an attempt to showcase a distinct personality and liveliness of mind that was so highly esteemed by Renaissance society.  The portraits painted by these Venetian masters stand out from other contemporary Renaissance portraits as a result of their striking evidence of materiality – what Mary McCarthy deems “a reverence for the concrete world”.3  The rich fabrics, bejewelled accessories, and lavish settings that adorn each portrait reflect a Venetian preoccupation with material goods and commercialism that is not surprising from a city that derived much of its wealth and power from its trade industry and maritime expertise.

The exhibition places great emphasis on the innovations of technique that can also be attributed to Venice’s status as a major commercial centre during the Renaissance.  Venetian artists experimented with the enhanced pigments, textural qualities, and the longer drying speed of oil paint, which afforded them a greater flexibility to work in a broader, more gestural manner than their Central Italian counterparts.  Venetian painters also began to privilege the use of canvas over wood for their works, which, in addition to enabling the large-scale dimensions of many of their commissions, allowed Venice to maximise its own surplus of canvas resources created by the profitable sailing-cloth industry.4  Displayed in one of the last rooms of the exhibition, Veronese’s The Anointing of David (1555) is an example of the spectacular way that Venetian Renaissance painters exploited the dazzling potential of the new oil on canvas medium.  Through its radiant colour palette, luminous surfaces, grand proportions, pictorial elegance, and theatrical sense of pageantry, Veronese’s painting intoxicates viewers with its sensuous quality and becomes a convincing celebration of the beauty of the physical world.

As it presents separate galleries of paintings by each of the major Venetian High Renaissance masters – Giorgione, Titian, Tintoretto, Veronese, and others – the exhibition consistently reinforces the significance of Venetian colore, the supremacy of colour and animated brushwork often at the expense of precise form and linearity.  In contrast to the carefully articulated sculptural forms and linear perspective manifested in the works of Central Italian artists in the tradition of disegno, Venetian artists exploited the new oil technique for a primacy of colour and gestural application of paint that infused their works with a unique sense of dynamism.  Paul Hills, an expert on Venetian Renaissance art who has published a comprehensive study of Venetian colore, attributes this Venetian fascination with colour to the perpetually changing atmospheric conditions, light, and reflecting waters of the lagoon and canals – “such colour is endless, abundant, unfathomable, imbued with latent energies”.5  The exhibition hails Titian as “the greatest exponent of Venetian colore” and provides many stunning examples of his manipulation of colour, tone, and texture.  In his portrait of Lucretia and Her Husband, Lucius Tarquinius Collatinus (c1512–5), for instance, Titian’s subtle modelling of white lends a sublimely diaphanous quality to Lucretia’s chemise, punctuated by an arresting emerald green drape that leads the viewer’s attention to the faces of Lucretia and Lucius – the central dramatic focus of the painting.  As their paintings reveal, Titian and the other Venetian masters “attained the highest luminosity and intensity from their use of colour … obtaining a force of expression that was liberated from the constraints of mere representation”.6

To return to the reflections of Mary McCarthy, citing the remarkable feat that an astounding number of Venetian painters ended up living well into their 70s and 80s, she suggests that “Venice is a game …, a fantasy, a fable, a city of Methuselahs, in which mortality has almost been vanquished”.7  The longevity of Venetian painters, such as those featured in Masters of Venice, is only surpassed by the agelessness of their work, as this exhibition so aptly illustrates.

2. Ibid, p. 173; Commentary from an introductory text panel in the exhibition. 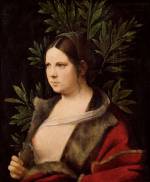 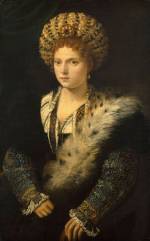