The year 2000 in Sydney was a hard act to follow. Every cynic – and there were many in the art world – who fled the Olympics was greeted on their homecoming with adulatory anecdotes, from the Games that brought everyone together in an unprecedented way, to public transport working as never before and to Sydney becoming a truly, but truly, cosmopolitan city.

2001, on the other hand, revealed an Australia divided – as never before – over refugees and their plight, over reconciliation with the original inhabitants, over becoming a republic, over falling into line with George W Bush, and over an Irishman continuing as director of Australia’s National Gallery in Canberra.

This was indeed a strange country going through strange times. Some maintained that it had reverted to the 1960s, when such was its conservatism that many of its intelligentsia, particularly in the arts, were forced to find greener pastures in London and other similarly creative and receptive centres. An economic rationalist conservatism, lacking vision, was certainly rife, but there were still opportunities to make things happen in the arts (and in a pretty big and meaningful way too) that was definitely not the case in Sydney and elsewhere in Australia during the 1960s.

Returning to the Olympic Games; its arts festival, which began its four year cycle in 1997 with the brilliantly successful 'Aboriginal Dreaming' organised by Rhoda Roberts, produced many wonderful events. None were more memorable than the Hetti Perkins curated celebration of 25 years of the art of Papunya Tula though; the movement that put Aboriginal and Torres Strait Islander artists on the world map. It is almost miraculous that this most ancient of all artforms only emerged for broader delectation at a moment when people had become accustomed to looking at non-objective – more commonly called abstract – art. We have, in particular, to thank Jackson Pollock and others of the New York School for preparing our understanding of the work of indigenous Australian artists. It is their continuing impact, both nationally and internationally, that is such a forceful reminder that proper processes of reconciliation must be enacted for Australia to be whole.

Sydney in 2001 was no exception to this rule. I read, in the November 2001 Art Monthly Australia, a review of The Native Born: Objects and Representations from Ramingining, Arnhem Land, published by Sydney’s Museum of Contemporary Art and Ramingining’s Bulábula Arts, with major texts by Bernice Murphy, former senior curator then director of the MCA and Djon Mundine, former arts advisor at Ramingining and MCA consultant curator. The exhibition in 1996 that preceded the publication was quite stunning in the way it revealed every aspect of the extraordinary cultural life of that community, from bark painting to carving to dilly bags and shell and feathered ornamentations. A vital point brought out by the book was the way in which the MCA entered into 'cultural agreements' with Aboriginal communities as equal partners, so that the artists could maintain control of their work. It is the important story of one institution breaking down a pre-existent, singular, monolithic and exclusive history to embrace the perspective of the indigenous.

This leads me to one of the most encouraging moments in Sydney in 2001, the saving of the Museum of Contemporary Art. You may well ask, in the light of what I have just written, why on earth did it need saving? Because, quite simply, it had had to rely on corporate and private support and entrance charges, rather than – like all the other public institutions in Sydney – being funded by the government. Despite putting on any number of remarkable exhibitions, it led a precarious hand-to-mouth existence until the NSW Labor Premier and Minister for the Arts, Bob Carr, pledged ongoing financial support in the middle of the year. This year's programme under Liz Ann MacGregor's stewardship has produced some memorable results: notably a photo-based exhibition titled, 'Veronica's Revenge'; an enormously edifying survey of Aboriginal artist Kathleen Petyarre; and a substantial overview of Brisbane-based proto-conceptualist using his own localised linguistic vernacular, Robert MacPherson, who is representing Australia at the next Sao Paulo Bienal.

The Art Gallery of New South Wales also had its moments, perhaps most noticeably during an idiosyncratic history of photography exhibition 'World Without End'. There was also 'Space Odysseys: Sensation and Immersion' which brought together, among others, Gary Hill's classic 'Tall Ships' with recent works by Luc Courchesne, Mariko Mori and Australian Joyce Hinterding with Laszlo Moholy-Nagy as precursor, a slightly left field but rewarding exhibition of abstract painting 'Phenomena' that included the hugely underrated, and now sadly deceased, West Australian Howard Taylor, and a Len Lye retrospective. The last named, with Colin McCahon who had a major exhibition at Amsterdam’s Stedelijk Museum in the second half of the year, was New Zealand’s major modernist, an explorer of sound, movement, film, form and the moment in an unparalleled way.

Public art has languished somewhat after the great push up to the Olympics that resulted in a remarkable range of impressive landscape and architectural-based intrusions and installations at Homebush, the site for the Games, involving many artists from New Zealand’s Neil Dawson to Australia’s indigenous Brook Andrew. The Sydney Sculpture Walk, organised by Sydney City Council, and located primarily in the Botanic Gardens and the approach to Mrs Macquarie’s Chair, successfully brought together work by indigenous artist Brenda Croft recognising the original inhabitants, as well as Bronwyn Oliver echoing forms of flora, and Janet Laurence paying poetic tribute to the species eucalyptus. Sadly, 2001 saw little further development.

In 2001 Sydney also languished noticeably behind visionary projects in other cities, particularly Brisbane and Melbourne. The former has seen the Queensland University of Technology develop a fine gallery as has Queensland College of Art, with Queensland University about to follow suit; the Institute of Modern Art has been spectacularly rehoused in a building named after the poet and writer Judith Wright, and Queensland Art Gallery is developing a $100 million Gallery of Modern Art. Melbourne is spending millions creating the Australian Centre for the Moving Image in Federation Square that will be managed by Cinemedia; the new National Gallery of Victoria’s Gallery for Australian Art will also be there. The Australian Centre for Contemporary Art is about to be rehoused in a new custom-built complex, and Nonda Katsalidis’s noteworthy Ian Potter Museum at Melbourne University and RMIT’s Storey Hall art precinct are further examples of Melbourne’s recent accomplishments.

Yet it is impossible to keep Sydney down. In the summer, when the jacarandas are in magnificent bloom and the exquisitely sensual aromas of jasmine, honeysuckle, mock orange, native frangipani and boronia penetrate the air, the place is irresistible, and there are always exhibitions of note to be seen. At this time last year, Darwin-based indigenous artist Judy Watson showed at Stephen Mori gallery a remarkable array of unstretched canvases using pigment, charcoal, earth, ash, pastel and acrylic; there were exquisite etchings too, and the subject matter is always related to the land of her ancestors.

Annandale galleries hosted a stunning exhibition of bark paintings and hollow logs from Yirrkala, titled 'New Art into Old'. Many other commercial galleries such as Sarah Cottier, Roslyn Oxley, Sherman, Yuill Crowley, Martin Browne and Ray Hughes mounted stimulating exhibitions, as did public funded organisations Artspace, the Australian Centre for Photography, and Boomalli Aboriginal Artists Cooperative.
Ivan Dougherty Gallery, funded by the University of New South Wales College of Fine Arts, where I work, had – as part of its brief – to create the unexpected. Three 2001 examples were a salon style hung 'A Century of Collecting', celebrating the Centenary of Federation; 'ANXIETY: the drawn figure'with Ken Currie, Ian McCulloch from Glasgow and others from Beijing and Sydney (the three nodal points of the International Drawing Research Institute), and 'MORPHOLOGIES', a joint exhibition with Artspace featuring digital video pieces by artists working at ZKM, Karlsruhe’s new media centre, such as Peter Weibel and Australian-born Jeffrey Shaw, and other Australians who have been resident there such as Susan Norrie, Ian Howard and Dennis Del Favero. Three key symposia accompanied each of these projects.

Finally, I have always maintained that Einstein's Theory of Relativity is not relevant to Australia. Unique aberrations and unique wonders happen here in the same day, often bearing no relationship to what is happening anywhere else in the world (and I’m not talking dwarf throwing). The other day I went to see the Sarah Cottier gallery Christmas exhibition; it consisted of one orange monochrome by John Nixon and a crumpled sheet of A4 paper on the floor by Martin Creed, whose totally original band Owada had played memorably at the College of Fine Arts during Jonathan Watkin's 1998 Biennale of Sydney. Einstein suddenly triumphed when I heard a few days later that Creed had been awarded the 2001 Turner Prize. 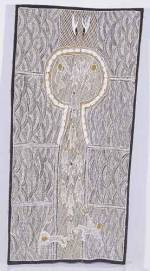