Gail Pickering: ‘I was interested in the histories of community video production’

Gail Pickering: ‘I was interested in the histories of community video production’

The camera never lies was a fallacy long before digital manipulation. While the images may be authentic, the contexts in which they are shot, edited and viewed can subtly or dramatically, intentionally or subconsciously, change the content and the meaning. Ideology, memory, environment, time and a multitude of other factors all exert a bearing. Gail Pickering’s work explores shifting cultural, historical and political perspectives, symbols and intentions, and the possibility of locating points of clarity in their midst. She places the viewer both outside and within, trying to find the eye of the information storm, while acknowledging we are intrinsically part of these phenomena.

Darran Anderson: I understand Mirror Speech was partially inspired by the democratic Vidéogazette community television project in the 1970s. Looking back, it seems a fascinating experiment containing utopian and dystopian elements (and lots of assorted situationist-style art of its own). It seems almost prophetic, too, having been made in a relatively radical age before the media swallowed us whole. What drew you to the project?

Gail Pickering: I was interested in the histories of community video production, including community cable TV of the 70s and pirate TV of the 80s in the UK; public access TV in the US, groups such as the Videofreex, which ran a pirate channel in upstate New York during the same period as the Vidéogazette. The late 60s and early 70s saw the arrival of domestic portable video cameras, such as the Sony Portapak, a tool for anyone who wanted to explore this new form of communication. Its contemporary parallel would be what the internet, smart phones and social media are for us today. The Vidéogazette was a state-sponsored social experiment in cable television embedded into the construction of a large-scale social housing estate. Its premise was for the community to learn this new media so they could produce and transmit their own programmes. I had read that a number of activists had moved down from Paris to be part of the scene, and was aware that Jean-Luc Godard lived in the area for a while, though he was not involved.

What really struck me was an interview I’d found with some of the community following its demise, where they had said that the video production they had been part of didn’t represent them, that the militants had monopolised the project. I don’t know the extent of this, or in what ways that might mean. I was looking at videos of public debates, community dance, amateur theatre, art and pottery workshops, teenagers talking about sex and immigration. I read this image now as conflicted and this, as well as the episodic nature of transmission, is the central premise of the work.

DA: I was struck by the inevitability of connotations while experiencing She was a Visitor. It seems almost impossible to be bathed in this intense red light and just empty your mind and experience it in isolation. Instead of something resembling enlightenment, the mind fills with associations – in my case, traffic lights, darkrooms, Twin Peaks, Mao’s Little Red Book, the little scurrying figure from Don’t Look Now – a visual collage of meaning and nonsense in the mind’s eye. It is not entirely clear if this comes from modern communications, or vice versa. Do you think it is necessarily a bad or new thing, this state of being overloaded with imagery and how does the artist deal with the chaos of echoes and images?

GP: She was a Visitor is the first work the audience experiences on entering the show. It is a site-specific installation, which comprises of a vast (24m) cyclorama wall, lit with an intense red light. The form of the cyclorama, of an infinity space, certainly refers to film – it’s architectural, a backdrop, whose primary task is to disappear, its anticipatory potential is a space for projecting a multitude of fictions (just as you did). The addition of the red light was my looking at sublimating a reference to militant film in the simplest way, without rhetoric, or specificity of its images. As the audience enter, in the first instance, their eyes are affected as they gradually adjust to the red light – all in this moment are subsumed in the red colour cast, equally. They are theatricalised in this sense, collectively as much as individually, and become self-aware of the physicality of their looking. The “image” here in the space of the piece is mutable, the audience are unassumingly complicit and participant to its temporary production, just as they pass through.

The main video installation, Near Real Time, is more a reflection on our contemporary relationship with images. The voiceover describes the ways in which we might relate to images, physically and metaphorically, how we might mimic things we see without realising we’re doing it. It suggests there isn’t a filtering, it isn’t an overload: the frame, the space where we both position and see ourselves, is productively flexible, though for the characters in my film, we see that it places a doubt on their subjectivity.

DA: This interest in subjectivity seems to permeate your work – in how it liberates and how we restrict it. Are you suspicious of claims of objectivity, of the dominant voices and the monologues (subverted as they are in Corridors and Near Real Time), both within groups and within ourselves?

GP: The works in the exhibition explore various states of fictionalising the document. A large part of my working process is in how I might distil references from historical material in some of the simplest ways. For example, the prominence of youth led to some of the decisions of the characters: everyone smoked – always – including, very intensely, in the TV studio debates. In my film, this became compressed as an image into the single suspended smoking cigarette. In other ways, some transcripts went through a lengthy process of becoming scripts, shifting back and forth between text and voice, filtered through my own experiences and reference. Inevitably, then, this becomes less a historical narrative; its embrace is rather my own subjectivity and presence.

DA: Time seems to be an aspect curiously overlooked by many contemporary artists, but there is a real sense of your work being 4D in that regard. How does the perception of time and space interest you in terms of your work?

GP: The exhibition is designed in such a way that the installations are immersive. For the viewer, a self-awareness permeates from the start, as their eyes are initially affected by the red-coloured light. I’ve heard people say that it was like seeing in black and white, and others describing the extreme intensity of seeing blue in the spaces that follow. In the main installation, the projection screens are set up in such a way that the audience can walk up to them and through them. The film’s characters are often at the same scale as the viewers themselves. Their point of view is constantly shifting as they move around the installation and the projected images fragment. This subtle participation is, for me, an echo of the community and its production that is depicted within the film, and this sense of live presence is important to the whole exhibition.

The suspended cigarette in the main video installation is repeatedly scored with the film’s title, Near Real Time. The phrase itself is a contemporary one, referring to live transmission. It implies a delay while under the guise of “being live”, the endless “now”. I like this a lot, and it made sense to me with the work. While I had been looking at these specific television histories, I was more interested in what the reflection might be here, today, on our relationship to pictures. It’s played out in different ways through the work, but to return to the cigarette, which gradually burns down to the tip before starting again, it’s a timer and a time-out, it’s a character, perhaps the voice of the film, and the smoke is its drama. 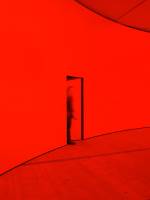 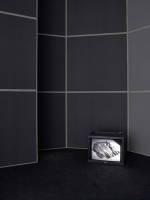