Down and Out but Well-Dressed

While economic hardship and escalating political tensions in the 1930s made life difficult for people around the globe, the 1929 Wall Street crash and Hitler’s rise to power did not dampen the fashion industry. Edwardian stiffness and conventionality were cast aside in favour of a modern, streamlined aesthetic. Elegance in an Age of Crisis highlights breakthroughs in style, materials and manufacturing through an array of beautiful examples of haute couture, men’s tailoring, Hollywood costumes and sportswear created in the major fashion centres of the world for an international clientele.

The Museum at the Fashion Institute of Technology, New York City, 7 February – 19 April 2014 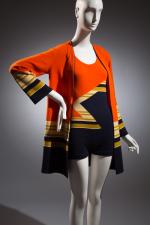