Though a failure as a societal ethic, simplicity has nevertheless exercised a powerful influence on the complex patterns of American culture. As a myth of national purpose and as a program for individual conduct, the simple life has been a perennial dream and as a rhetorical challenge, displaying an indestructible vitality even in the face of repeated defeats. It has, in a sense, served as the nation's conscience, reminding Americans of what the founders had hoped they would be and thereby providing a vivifying counterpart to the excesses of materialist individualism.1

In 1969 Studio International allowed Donald Judd to air his grievances towards the art world in an aptly titled article, Complaints. In this, Judd railed against the failings of art, artists, architects, art critics and institutions. No one, it appears, escaped his vitriol and the editor allowed him in his grumpy tirade to describe one critic's work as 'shit'. He claimed only to agree to write Complaints to stop Studio International from calling him a minimalist.

Very few artists receive attention without publicity as a new group. It's another case of the simplicity of criticism and of the public. It seems as if the magazines are unwilling to give a new artist space by himself.2

In Art and America in 1984, Judd continued his excoriation of the failings of contemporary art in A long discussion not about master-pieces but about why there are so few of them. Judd claimed that art of the 1970s had been integrated into 'industrial and bureaucratic society'. Judd favoured local independence: 'The opposition can't be an institution but must be lots of diverse and educated people arguing and objecting'.3 Judd had a dark, ironic view of the art world and the world at large. The art world, in his view, simply paralleled the mindless conversion of American towns into 'strip' cities. Richard Shiff observed Judd's reactions:

Things were happening and the changes were visible, but few who noticed were thoughtful about it, and no one was supervising. If the cultural environment was bleak and the situation of the artist out-of-control, good work nevertheless continued during the 1970s and 1980s, even if to little effect in the face of the postmodernism vogue and an attitude on the part of the critics, 'that art should be democratic'. It was a position that might be nobly motivated, however misguided; but all too often, like other politicised aesthetic stances, it was merely opportunistic.4

The notion of quality in art became increasingly unpopular and deemed politically incorrect. Judd, however, objected claiming that, 'Politics alone should be democratic … art is intrinsically a matter of quality'. Like that very different commentator, Peter Fuller in Britain in the 1980s, Judd was not remotely hesitant in his demolition of mediocrity in art. 'There's serious high art and then there's everybody else, all equally low.'5

Flavin plays Reinhardt, entertaining but not worth an article on his work; Bell and Irwin hardly exist; Greenbergers such as Krauss review all the shows … that's balanced mediocrity.6

Of Jack Wesley Burnham's book, Beyond Modern Sculpture, he writes:

Never mind the present. It's a pastiche of art survey information and misinformation. His idea of history, such as it is, is deterministic. Everyone has his hindsighted place and history rolls on.7

Judd further criticised Burnham's study as 'baloney' and 'silly futurism', and his work as suffering from 'sloppy correlation[s], careless and general history and the mystical projection of the future'. Judd did, however, admire Carl Andre, Dan Flavin, Claes Oldenburg, David Rabinowitch and Richard Serra.

Donald Judd was born in 1928. As his Studio International article of 1969 states, he was vehemently opposed to being labelled a minimalist. Yet in Minimalism, Art of Circumstance, Kenneth Baker clarifies certain misconceptions:

Think of 'Minimalism' as the name not of an artistic style but of a historical moment, a brief outbreak of critical thought and invention in the cavalcade of post-war American art … Many of the American artists known as minimalists have in common little more than the fact that their works met with some recognition and success in the New York art market as it began to set the pace of international traffic in contemporary.8

Minimalism is used in a general sense to denote works of art or forms of design that are characterised by a stylistic austerity. It is more precise when applied to the visual arts, especially sculpture. The works produced from the 1960s onwards by Carl Andre and Donald Judd, for example, are generally referred to as minimalist. Expressive technique was absent, factory-made replaced handmade. The work found its roots in Suprematism, De Stijl and Russian Constructivism, in the work of Kasimir Malevich, Aleksandr Rodchenko, Piet Mondrian and Josef Albers. Mondrian and Albers both lived in America in the latter part of their lives. American industry and the burgeoning mass production of objects of all kinds lent itself to the method and vision of both Judd and Tony Smith.

[They] responded to the cynical superabundance of industry by using its services to produce objects calculatedly unlike what the cornucopia of mass production disgorges. These artists recognized that industry controlled the aesthetic physics of objects to a degree that no individual artist could, and they resorted to industrial fabrication in order to avail themselves of that control.9

Minimalist art can be characterised by qualities that differentiated it from traditional aesthetics; it is indistinguishable from basic materials or found objects. In this Marcel Duchamp was their historic precedent. In their renunciation of plinths and materials such as stone or bronze, their true precedent was Constantin Brancusi. With hindsight, the fury and the rhetoric of Donald Judd's writings can be explained as a product of the extraordinary tension and pluralism in the art world and in culture in general in the 1960s - a tension that was, in fact, exploited by certain editors and commentators who derived pleasure from setting factions and individuals against each other. Baker observes:

Whether the concept or specifications of a work of art have priority over its material reality - and who decides this and how - were live issues throughout the Minimalist years. The works of some artists - despite what they may have said to the contrary - affirmed intellect as the determinative dimension of people and of art; others gave primacy to the observers' bodily awareness as the standpoint from which he must construe an artwork's rationale and his own role in determining what he sees. A widely held assumption in the New York art world of the 1960s was that in terms of the way his work resists easy reading, an artist might propose without words a theory of how and where meaning occurs and what it is to see understandably. Among the so-called Minimalists were artists who tried to do just that.10

Minimalist art in America came about as a reaction to the romantic exuberance of Abstract Expressionist painting. Numerous other references from American culture can be found expressing simplicity in architecture and design. Society in the 1960s was characterised by the polarity of individual expressionism versus the inescapable demands of society. Minimalism was a counter to a form of television-inspired narcissism; it was a high-minded form of individualism - a reaction to the conformity and personal sacrifice required during and after the Second World War. Minimalism was deeply sober at a time when a great conflict existed over questions of personal liberty, highlighted by the Vietnam War. Issues of civil rights and government doctrine brought issues such as racism, feminism and the legitimacy of institutions into question.

The questions raised by Minimal sculpture seem a lot less abstruse when you remember how pervasive (though how inconsequential from the vantage point of power) was the issue of the individual's capacity to judge the meaning of events in his own life and in the larger world. In Minimalism and Pop Art, though with very different emphases, the nature of human selfhood and the weight (or weightlessness) of direct experience were interconnected themes.11

The elimination of artwork-as-commodity was seen as the only valid way in which a culture dominated by commercialism could be reversed. In the 1970s the critical spirit became neutralised by the art business, coincidentally as a number of Minimal artists were becoming extremely successful in financial terms.

Donald Judd was born and raised in the Midwest. He joined the army after high school, knowing that he would in due course qualify for an educational grant. In 1953 he graduated from Columbia in Philosophy; he had also studied at the Art Students' league in Manhattan. He completed a Masters degree in 1962. In 1959 Judd began publishing art criticism in Arts magazine (then edited by Hilton Kramer) and became a regular contributor. By the late 1950s Judd was quite disillusioned with painting and began to experiment. He produced in 1961 a work that with hindsight was an important point in his development. 'Relief' 1961 was made with asphaltum and gesso on composition board, mounted on wood with an aluminium baking tray inserted in a sunken central point. Real space and the abstract surface were explored, 'The empty pan reads as a mocking declaration of the art object's contentlessness'.12

Judd's early sculptures were makeshift and rudimentary, made by himself, before he enlisted professional fabricators to produce most of his work, under his supervision. Against the dramatic and effusive (and culturally dominant) Abstract Expressionism works of the same period, Judd's work was described, by Harold Rosenberg among others, as boring. As I approached the retrospective at Tate Modern earlier this month, I half expected to react the same way. What I did not expect was to find a level of surprise and freshness about the large, factory-made works. Nor to feel comforted or inspired, and yet I did. The works are pure, they are thrilling and contemplative. Judd himself was in no doubt of his aims. He wanted the viewer to be cleansed of the usual preoccupations of a work of art, 'of falsely climactic emphases, of susceptibility to tricks of illusionism, and of the restless drive to penetrate behind 'mere' appearances'.13

Judd put objects such as an open aluminium box lined with plexiglass in an art context and, unsurprisingly, met with a degree of hostility and rejection. The fact that these objects were not made by Judd himself seemed to aggravate his critics further. Judd wanted a level of control over the actual physical details of an object; by contracting an 'expert' worker to do so in Judd's view, increased his control.

Donald Judd (1928-1994) became one of the most influential artists in America in the second half of the 20th century. This major survey of his work opened at Tate Modern on 5 February 2004. It is the first full exhibition of Judd's sculptures and coincides with the tenth anniversary of his death. It is appropriate that Nicholas Serota, Director of the Tate since 1988, should curate the show, since he has championed Minimalism for decades. The exhibition includes some 40 works. It begins with a series of early paintings and handmade works from the early 1960s; the progression from two- to three-dimensional work is shown. The exhibition explores the development of Judd's new and original vocabulary. Through factory-made pieces he was able to create large floor and wall-based works in the 1960s and 1970s. The materials used were not orthodox materials but included galvanised iron, steel, plexiglass, plywood and polished copper. The highly coloured wall pieces of bolted aluminium from the 1980s and the beautiful painted plywood and plexiglass sculpture from 1993 are at once subtle and spectacular. This is a fine exhibition, a credit to Serota and Tate Modern. It acts as an important reminder of the seminal thoughts and artistic manifestations of America in the 1960s: austerity, elegance, altruism and independence. 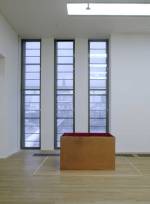 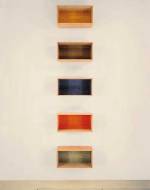