Constantin Meunier is now mostly remembered for his bronze statues of industrial workers, but this retrospective concentrates on 30 years’ worth of drawings, paintings and sketches that led up to his later career

Constantin Meunier is omnipresent. The Brussels cityscape announces his iconic industrialist oeuvre everywhere en route to the gallery, which, this autumn, captures the concerns of the artist wholly: an oeuvre fuelled with the industrial, social and political developments in a country deeply and continually divided at the end of the long 19th century.

“What I am not indifferent to is a man who is far superior to me, Meunier, has painted … all things I’ve dreamed of doing,” said Vincent Van Gogh in 1889. Van Gogh was a contemporary of Meunier, the latter of whom was born on 12 April 1831 in Etterbeek near Brussels, where he received his training as a sculptor (and later painter) between 1845 and 1854 at the well-known Fine Arts Academy. Meunier is now mostly remembered for his iconic bronze statues of industrial workers – in fact he owes his fame to heroic scenes of labourers and miners – though he was not part of the socialist movement that erupted in Europe during the 19th century. With this retrospective, set more than 100 years after the first 1909 solo show, the Royal Museum of Fine Arts wants to offer the visitor a different Meunier. Curator of the exhibition, Francisca Vandepitte, emphasises that Meunier’s industrialist period bloomed more than 30 years after the start of his career, and that the novel character of this exhibition lies in the particular attention that is given to the first decades of the artist’s career.

So before he encounters sturdy miners and dockers, the visitor chronologically travels through nearly 30 years of drawings, paintings, sketches and designs that carry the historical, civil and religious depth that would be influential for Meunier’s later career. The exhibition equally offers the opportunity to see the artist in a more international light. Meunier was an artist, the curator stresses, who fully understood his craft and his own fin-de-siècle timeframe, but he has too often been claimed as a nationalist and hence local artist. In these elegant rooms, we encounter a man who grew to become a key figure of the realist movement and a contributor to a number of international exhibitions such as the Vienna Secession of 1898, the Salons in Paris and his solo show in Siegfried Bing’s Parisian gallery L’Art Nouveau in 1896.

Thirteen dimly lit and themed rooms lead the visitor through the career of an eclectic Meunier. In “Academy, bourgeois and history painting”, we witness a young Meunier who sensitively depicts his seated mother in a delicate pencil drawing. During this time, he paints orphan girls and nuns, most probably daily available yet unknowing models for the artist’s aspirations. In his early 20s, he shifts towards realism and this is an obvious move. Between the period 1865 and 1878 a number of Meunier’s paintings noticeably display the social concerns that would be at stake in his work after he had visited the Cockerill steelworks in Seraing, Belgium, in 1878. The gloomy Saint Étienne, an early Christian martyr and defender of the poor who was stoned to death in the year 34, and the spirited La Guerre des Paysans 1789-1799, which reminds us of Gustave Courbet’s work, are good examples of this early period.

Although it is the exhibition’s aim to allow the visitor to see a different Meunier, or, a more complete Meunier, it is still the classic industrialist oeuvre, or l’esthétique du travail as contemporary Fernand Khnopff puts it, that remains the most impressive. From 1880 onwards, after his visit to Seraing, which obviously impressed him deeply, Meunier starts producing the first scenes of industrial labour. The grand La coulee à Seraing of 1880, here juxtaposed with the iconic Le Puddleur of 1884 are strong illustrations of this new and novel iconography the artist employs.

Meunier does, however, remain eclectic. This can be seen in paintings such as the almost cheerful Manufacture de tabac à Séville, which he paints after he was sent there by the government in 1882 to copy the work of Pieter de Kempeneer, or in the pastel based on Wagner’s famous piece, La Walkyrie of c1886.

When the visitor nears the end of the exhibition he is confronted, in the true sense of the word, with two awe-inspiring images, the bronze Le Grisou – femme retrouvant son enfant parmi les morts of 1889 and Triptyque de la mine of 1900. Both capture, in my opinion, what Meunier, toward the end of his career, tried to convey: hardship, labour and a changing, sometimes unforgiving world.

The retrospective Constantin Meunier is a serious, no nonsense exhibition. Some of the works, such as the exquisite bronze statue of the valiant Pit Pony, even make it hard-hitting, a reminder that those without any choice had to work in often unbearable circumstances, deep underneath the surface of the Earth. Suffering and death are recurring themes in this exhibition, giving it a solemn character. However, the quality of the works on display is excellent, and the discovery of hitherto lesser-known work in the form of paintings and drawings is refreshing. As Michel Draguet, director general of the museum, says, for this retrospective, Meunier’s oeuvre was gathered from collections across the globe, attesting to an international appeal for the artist. Draguet adds, rightly, that Meunier remains en vogue. The audience continues to identify with the artist’s powerful messages, although focus has shifted. When guiding a number of young pupils through the exhibition, Draguet found that the new generation sees Meunier as a sort of apologist for current ecological and pollution issues. And it is, of course, for those next generations that Meunier deserves to remain in clear view. 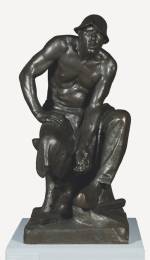 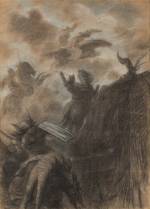