Now that the 'The Gates' are all dissembled in Central Park (and no doubt carefully stored while their value accumulates - what price one or two 'Gates'?), it is useful here at Studio to reflect on the artists' previous works. The cover of Studio International (vol 198, no. 1011, 1985), featured Christo's wrapping of the Pont Neuf in Paris, which was also only 'up' for barely a fortnight (20 September - 4 October 1985). In Studio International (no. 1001, 1983), we covered 'Surrounded Islands', Christo's Miami project, reviewed by our contributor, the late Dorothy Walker. It was, in her own words, 'a seven mile, three-dimensional flower painting'. Latterly, as Walker reminded us, the Pont Neuf itself had been saved by the Russian commander Prince Wolkonsky after Napoleon's defeat at Waterloo, when Paris was occupied by the Allies of the time - the Russians, Prussians, Austrians and British. The Prussian commander, in a fury with Paris and the French, wished to destroy the bridge, but Prince Wolkonsky moved his entire high command onto the bridge, and told the Prussian, 'if you blow up the bridge, you blow me up with it.' The Prussian desisted and the bridge survived to continue its peaceful link between the right and left banks of the Seine and the Ile de la Cité in the middle of the river. The Parisian public, as did New Yorkers at Central Park last month, 'flocked to see a bridge they had been looking at all their lives'. There is no doubting Christo's genius and we are eager to know what his next project will be, and where, even if the gestation may take years. 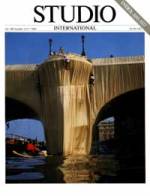