In her largest exhibition to date, British artist Caragh Thuring presents a diverse series of abstract paintings that elicit a multitude of questions, but refuse to provide answers

What will you do for art? How involved will you get with a painting? How much will you think, or maybe, how much should you think? Each of these questions is brought to the fore in Caragh Thuring’s latest exhibition at London’s Chisenhale Gallery, the British artist’s first solo presentation in a public gallery and the largest exhibition of her work to date. The 13 large paintings by Thuring (b1972) may be disparate in style and subject, featuring the windowsills of Dutch strangers, female golf players from 90s advertising campaigns and a textual catalogue of each church within the Square Mile of London, but amid this variation exists a recurring conceptual motif. In each painting there is an empty space. This space is not one of visual absence, but rather a void of definitive meaning, a cluster of seemingly frayed strands that can be tied together by the viewer alone.

To enter the main room of the Chisenhale is to believe that you have accidentally gained access to the trade entrance. Unexpectedly, the door opens on to the reverse side of the show’s inaugural work, Golf, a painting of four female models appropriated from a 90s Ralph Lauren campaign, overlaid with painted wire mesh and stencilled brickwork. As the viewer is directed to the left by the angled work, one suspended from the ceiling by two discreet cables, they are shown the vital organs of the canvas: the frayed material, the wooden support beams, the mirrored echo of the frontal image. Already, the idea of audience participation that will become a recurring theme throughout the show is evident. Thuring does not allow viewers to stand apart from her works, removed and reticent, but rather forces them to enter into each piece – to find their own way and to make judgments as they go.

One Four Seven introduces one of several bodies of work on show. Dark oil and charcoal sketches of spotlights, vases, plants and mosaic grids litter the unprimed canvas, interspersed with blurs of coloured spray paint. The eyes flit between the perceptible forms as the mind attempts to piece the fragments together, a veritable dot-to-dot. Just as with Dutch Wrangler, August 2014 and Minnie Mouse, the exhibition’s other more abstract works, One Four Seven presents a disjointed collection of symbols, suggestive markings that Thuring calls “shortcuts”. In their hurried, almost incomplete states, they are not obvious representations of, or references to, certain items or concepts, but rather directional indicators, signposts that plant enough of an impression in the viewer’s head to inspire a continuation of thought. As Thuring asserts in the programme notes: “It’s about how little you can do: what’s the least you can do to get your intention across, to make people work a bit and have a bit of imagination.”

August 2014 demonstrates this perfectly. A blacked out linen plane marred by splashes of dark grey, an off-white circle and an inverted triangle of brash orange oilstick – the work initially appears overpoweringly abstract. On closer examination, however, the viewer again joins the dots and certain aspects of the painting begin to unite. Orange lines. Fireworks. White splashes. Stars. Circle. Moon. Triangle. It is a domino effect – as soon as one aspect of the work becomes perceptible, then another miraculously falls into place. The viewer enters into a reciprocal and progressive relationship with the paintings, no longer works of Thuring’s construction alone, private and impenetrable, but personal compositions of the viewer’s own creation.

The four back-to-back works suspended in the centre of the gallery are a little less cryptic and reveal a bit more about Thuring herself. Both Trophy and The Longest Day recall the motifs of brickwork and readymade advertising images in order to visualise the polarised emotional states of accomplishment and frustration that are alluded to in their titles, and in doing so show the hand of the artist. The works carry a recognisable message of Thuring’s own selection, and are therefore less open to interpretation than the previous works. This limitation is also noticeable in Map and Square Mile, where looping red spray paint chronicles every church standing within the financial district of London. The canvases are simply more comprehensible than those on the walls – immediately understandable as tributes to the structures that stand defiant in the face of capitalism – and they are, therefore, a little disappointing. We see the artist’s own handwriting, we acknowledge her geographical location, and for the first time we notice her attempting to influence what has previously seemed to be our self-directed interpretation.

Several of the paintings on display depict the windows of Dutch homes. The first of these works, Bush, shows a windowpane supported by rough brickwork, two vases and a potted plant. Like the hastily painted architectural struts that border the canvas, these rough objects give the impression of being unfinished. With visible brush marks and dripping paint, they give the viewer enough to think about without doing all the work for them. While absent of actual figures, these Dutch windows are actually portraits, obliquely describing a discernible set of characters. The minimalist scene of Belbo, for example, suggests an organised but lonely personality, the canvas predominantly blank aside from a light, a vent, two polkadot vases and a dark weed growing over a garden tap. In contrast, the vine-clad window of Venstor is set at an angle, the walls of the room interrupted by decorative objects and the table topped by ornate glass vases. The portrait is more frantic than that of Belbo or the final Dutch scene, Self-Fashioning, one of simplistic lampshades and an ordered trio of blackout blinds. Or perhaps it isn’t. There is very little way of knowing, as Thuring repeatedly refuses to provide any definitive answers to our questions. In fact, she constructs her works in such a way that it is no longer us that leads the questioning, but the artist herself. We are not told who lives in these houses, rather, we are asked who lives in them. Thuring redistributes responsibility, meeting our gaze and quickly returning it. Our answers become the only answers, our knowledge the only knowledge, and we are a little closer to understanding that this exhibition involves us just as much as it involves the work itself.

Here we must return to the opening questions: What will you do for art? How involved will you get with a painting? How much will you think? It is more of a challenge to remain outside Thuring’s paintings than it is to enter in. With the fragmentary visual suggestions relentlessly tugging at the viewer’s curiosity and their human desire for completion, it would be no mean feat to look on each work and remain distant. The important question here, though, is how much should you think? In an interview with Katie Guggenheim, exhibitions and events organiser at the Chisenhale Gallery, Thuring states: “There’s very little painting in the exhibition that you can look at and think, ‘Oh, that’s that.’ You have to look and try and fathom what’s there.” If you devote some time to these works, following Thuring’s shortcuts and drawing links between each of the visible suggestions, you will realise that there is more to this exhibition than the visual alone. It is about the process of understanding, the practice of mapping a canvas and gradually working your way towards a final judgement, not one explicitly stated by the artist, but one formed of your own volition. How much should you think? Probably quite a lot, because without you Thuring’s works will for ever hang incomplete, their various strands untied and frayed. 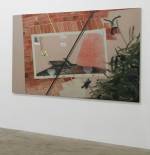