The Hamburg originated architectural practice von Gerkan Marg and Partners are long established in Germany and worldwide. This volume is no dull catalogue of prospecting commerce spreading its tentacles across the Peoples Republic of China. But rather, as befits a mercantile and global seaport, these Hamburg architects started their voyage with an international and exploratory perspective in l998, the 23rd year of the group’s existence. The book describes the works designed over one decade to 2008.

Von Gerkan has described this in a most informative introductory essay here, entitled “The Chinese Challenge”: Impressions of the Far East,” My Experiences in China”. Like an experienced mariner he judged that the time was right to survey the newly, emergent China. The pretext had been an Invitation to enter for a competition for the German School in Beijing. In temperatures of –25 degrees Celsius (–13 degrees Fahrenheit) he and every other invitee struggled over five December days to inform themselves about the context of the building and to impress the clients and also the Beijing authorities. Von Gerkan admits that this was the start of a steep learning curve about China, accelerated because he actually won the competition. Two years later, he was fortunate to be invited to lecture at the Union of International Architects conference there. Soon after, he recounts, through a series of chance contacts, GMP as it became known organised an exhibition of work in Beijing. This was an astute move, and gave them a lead-in over other international architects scrambling for new work, a development that, as the book shows, has sustained them through to date.

Von Gerkan and his colleagues learnt to be ‘patient’ in all their exchanges, and over the decisions that should be made stage by stage. He says that a polite Chinese person never says an absolute ‘No’, “and we have come to understand that at times the word “perhaps” can mean much the same as ‘No’: also how important it is not to “lose face”. As Von Gerkan says, a ritualised approach to life is pleasant enough once you can get used to it. Social activities seem to be interwoven with business and contract negotiations. Meals, banquets, and the exchange of toasts accompany progress. One is reminded that this is a very old civilisation; conversations are conducted in metaphors, yet the projects illustrated in this book demonstrate a remarkably speedy progress, notwithstanding the needs of diplomacy.

The largest single project has been for Lingang New City. Here a lake forms the epicentre of a radial plan of 13 districts, each with a population of some 18,000. This entails also smaller units which have communal public areas grouped experimentally around courtyard structures. These courtyards play a key small-scale social role for such as childrens’ play, places with seats for smoking and table games. Lingang itself is intended to become a showpiece for Chinese life and culture. Today, the book reveals in all else a portfolio of some 240 projects, 168 of which were the result of the developing competition process, the remainder being the result of consultancies built up with Chinese authorities, or direct commissions. This suggests that over 10 years, there could have been an average of some 24 projects per year, or two per month in round terms, through the office. It seems that the secret of their way of doing things was to pursue an architecture derived from the conditions, from the social context, from the function, also from consideration of the urban context, from the economy, and ultimately from timeless design intent. For subtropical zones in China ”we use adjustable screen elements (something new there to provide shade in front of the façade in order on the one hand to save energy and on the other to improve the usability of the interior, no matter whether the building contains offices or apartments.” In China, says Von Gerkan, “One is given the chance to present a strong idea conceptually without the fear that one may have infringed on a lot of restrictions and regulations.” A particular case in point here would be the 2006 Competition winning project by Meinhard von Gerkan and Stephen Schulz, with Nicholas Pomranke, for the Shenzhen Sports Centre, for the Shenzhen Works Bureau (Bureau of Public Works of Shenzhen Municipality). While landscape plays an important role, it also acts as a foil to the crystalline structures, which as seen present them as one whole subdivided (‘like rocks and stones’). This seems to mark a new fruition in the collusion of GMP with China. Construction is to be completed by 2011. It is also a mark of the fruition of 23 years of negotiation in China over various projects by Von Gerkan that such a strong basis of trust and confidence has been established for the future. This book effectively endorses such progress and achievement in a new field. 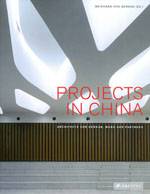