English-born, John Wolseley had attended St Martin’s School of Art in London, and then significantly had worked under SW Hayter, the distinguished printmaker, in Paris. He had annually visited Malta and Gozo for the period 1968–1971. In 1971 he won First Prize at the Krakow (Poland) International Print Biennale. He then won the Kantos Prize, Florence, with a set of etchings submitted for the Florence Print Biennale. He travelled to live and work in the Spanish Pyrenees, and then in Thailand. It was fortunate for Australia and himself, one could say, that he then arrived in Australia in April l976. Perhaps Wolseley proves from an early stage to have been a classic example of the English itinerant traveller abroad.

He had himself been the son of a painter: and yet the Wolseley lineage runs impressively back to Edric de Wulsellegh in the ll50s, and there is a continuous line direct to John himself. It can be understood that he might be shaking it all off himself, clearly in order to have the freedom to be an artist, free of prior attachments. It has proved the fruitful sojourn of a lifetime so far. Unlike the early 19th century migrant painter to Tasmania, John Glover, who made the trip late in life, Wolseley arrived in his late thirties. In 2005 he received the Australia Council Visual Arts Emeritus Award for his work as artist, teacher, and one could say, environmental protagonist.

In 1986, Janet McKenzie had written of John Wolseley, in her published work Drawing in Australia: Contemporary Images and Ideas, ‘many of Wolseley’s drawings are topographical in nature and are made up of a series of notational responses made over a considerable period of time. He also emphasises the frontality of the picture plane – tilting it forward to increase the impact of the image and to enable a free movement around the surface. He has recently constructed large works by pasting small individual drawings onto a larger sheet of paper to chronicle his travels and observations.’ She had said, ‘In the manner of nineteenth century explorers, Wolseley makes notations about the places he travels to.’ And, ‘he does not share the desire of many landscape artists of wishing to create a national identity or works of grandeur, yet since he arrived in Australia from England in 1976, he has penetrated the Australian landscape more deeply than most lifetime residents.’

John Wolseley is in this book, fortunate to have had the attention and application of the Australian scholar and internationally known art historian, Professor Sasha Grishin. Grishin has followed his Land Marks I (1998) with this essential documentation of Wolseley’s later work, as Land Marks II. Both publications have been made by Craftsman House, the leading Australian art publisher. What emerges is a clear picture of Wolseley’s extraordinary and prolific output made in his adopted land, over thirty and more years. Grishin conveys the essence of Wolseley’s methodology, his inspiration and his unremittant application. He has been compared with the very senior painter there, John Olsen, but that can only be by way of an introduction. As Grishin points out in the introduction, John Wolseley noted ‘I genuinely feel that the land here has not really been painted yet – except by some singular artists, and of course aboriginal ones, and this is because we’ve imposed European or other foreign models on something most peculiarly different.’ John Wolseley has always worked by the notation of his own journals. His methodology might be described as ‘forensic’ in inspiration and application. From these copious and all embracing sketches and writings Wolseley builds up a documentation of the wilderness, outback or landscape. But one like no other, assembled from minutiae of geology, flora and fauna.  As Grishin says, ‘the starting point for Wolseley’s exploration of the wilderness lies neither in theory nor in the aesthetics of picture making but in the experience of the wilderness itself. Wolseley makes no attempt to persuade us that what we have before us is an authoritative reading of nature; we have a collection of evocative observations which introduces us to a certain slice of wilderness and which prompts us to see the world differently. Yet as ultimately all art can be described as “social production”, and all human concepts by definition are linguistically and culturally enframed, the concept of “wilderness” is no exception and hence is a product of anthropocentricism.’

It might be added that Wolseley, unlike other artists, does not trip out in a four-wheel drive SUV overland and for a night or two in a creek, but embeds himself into the terrain for camping for weeks or months in the same location. This superbly presented book is a worthy adjunct and documentation of Wolseley’s career so far and we must hope that there will eventually be Land Marks III to follow in due course from the same author. The book opens a whole new dimension of art study, and should be of much value to those offering courses on land art, land installation art, as well as seeking more wisely to revise the whole ethos of ‘landskip’ art, something otherwise little amended since the Dutch artists of the l7th century. 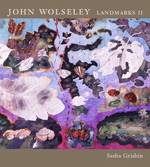