Mistresses of heart and mind

Dangerous Women: The Perils of Muses and Femmes Fatales
by Laure Adler and Élisa Lécosse

A woman in love is dangerous. For men, she may be an object of desire; to herself she is the subject of her own, however unrealized, love affair. Sparked by an external impetus, sexual love might ignite in women the feminine power that men fear. But when women find the source within themselves, they become masters of their destinies. Feminist historian Laure Adler (Marguerite Duras: A Life) and art historian Élisa Lécosse (Love in the Louvre) explore this thesis in Dangerous Women: The Perils of Muses and Femmes Fatales through art works and stories of real and legendary women drawn from the canons of art and literature.

In their works, male artists and writers have reflected on their fears of Woman as archetype, as well as the frequently obscure nature of their relationships with flesh-and-blood women. The briefest survey of such works proves the impossibility of forming definitive conclusions; still certain themes have trailed women like an unshakeable shadow. For example, that the road to self-possession is rough, idiosyncratic and fraught with risk. Branded both savior and enemy of men's souls, capable of transforming men into beasts and beasts into men, women have tried various means to secure independence. Adler and Lécosse venture into this slippery territory in a volume straddling monograph and coffee-table art book.1 Mostly created by men, the images and literature they reference include works by a few women artists embraced by feminists: Early-baroque Italian artist Artemisia Gentileschi (c.1593–c.1652); Swiss-Australian neo-classical painter Angelika Kauffmann (1741–1807); French sculptor and graphic artist Camille Claudel (1864–1943); Mexican painter Frida Kahlo (1907–1954); French writer/artist/photographer Claude Cahun (1894–1954); American abstract-expressionist sculptor Louise Bourgeois (b.1911); French conceptual artist Sophie Calle (b.1953); and English conceptual artist Tracey Emin (b.1963).

In her introduction, 'Between Rapture and Ecstasy: Women in love know who they are and where they are going', Adler muses on the conflicts within male and female artists regarding notions of Woman. Dispensing for the moment with first woman Eve, Adler begins with the Virgin Mary who luckily, through divine intervention, has overcome an insurmountable obstacle: her sex. From a woman's point of view, Adler remarks, the Virgin may not have been so fortunate: 'She protects us, reassures us, gazes at us, often as if she wanted to upbraid us, as if she wanted to tell us: I was not in love, to be in love was a state I was unaware of...', and Adler discusses one instance, Lorenzo Lotto's The Annunciation (1527), in which the Virgin appears dismayed in a scene marked by a grave portent: a black cat scattering across the room, casting its malevolent eyes at the news-bearing angel.2 When summarizing complex patriarchal views of Woman, commentators might be forgiven for resorting to dichotomies (virgin/whore; wife/mistress), but Adler joyfully dives into murky waters, the sensuous human elements that impart sexual allure to many portraits of the Virgin.

From a wary Virgin pondering a future beyond her control, as captured by Lotto, to the face of a powerful courtesan painted on the Divine Mother there is an enormous divide.3 Adler's lens hovers on women who rejected traditional roles defined by men; social safeguards accepted by the majority of women of their times. She locates their strength in Love as an impersonal force. For the Virgin, this force comes from God. For human women, it comes from the Self. As a prehistoric model of this feminine power, Adler points to a drawing from Malta (c.4000-3000 BCE), Masturbating Woman. Strong and solid, resembling a carved boulder, the faceless figure conveys its self-inspired rapture through body language. As contemporary role models, Adler chooses Bourgeois and French art critic, curator and writer Catherine Millet (The Sexual Life of Catherine M.) who, in Adler's words, are 'women with the hearts of men'. A 1982 photograph of Bourgeois cradling her phallic-like latex sculpture Fillette (1968) taken by Robert Mapplethorpe shows the smiling artist at peace with her trophy. Such living examples of self-possessed women have counterparts in centuries past, many of them considered in subsequent sections of the book.

In 'Woman and Love: Models, myths, and fables', Adler and Lécosse begin their circuitous tour, starting with the Venus of Willendorf (c.24,000–22,000 BCE), a limestone statuette discovered in 1908 in Willendorf, lower Austria, and classified as a Paleolithic Venus. From there, readers will encounter Greek goddesses (Juno, Psyche, Dido, Ariadne, etc.); and literary martyrs to love (Shakespeare's Juliet and Ophelia; Dante's Francesca). As the Goddess of Love, Venus embodies love's benevolence and treachery. Portrayed by Titian in his Venus of Urbino (1538), the figure neatly connects to Masturbating Woman as, clearly, this woman is the instrument of her own pleasure. Juliet and Ophelia, martyrs to their passion for a particular man, are weaker yet remain noble in their suffering. Niki de Saint-Phalle's lace sculpture, La Mariée (The Bride) from 1963, likewise elicits multiple readings. Saint-Phalle embeds her model of womanly attainment with disconcerting details (crabs, crocodiles, planes, guns), thus questioning the cost of winning a husband.

In 'Seductress and Enchantress', the authors place works depicting the Temptress. For example, Michelangelo's Original Sin (1508-12) from the Sistine Chapel joins Francesco Salvati's frescoes of Bathsheba in the Palazzo Sacchetti, Sala dell'Udienza, in Rome (1552–1554); Eugène Delacroix's Medea about to Kill her Children (1862); and Burne-Jones's The Beguiling of Merlin and Gustave Moreau's Salome from the 19th century. Inclusion here of Georges Barbier's pochoir print of Scheherazade (1913) challenges readers' views of feminine seduction. Recounting Scheherazade's story, Richard Burton in The Book of the Thousand Nights and a Night describes her enchantment of the king of Persia with her creative and intellectual talents, thereby saving her life. While creative pursuits for women have been tolerated (and sometimes encouraged) by men, most often men have cautioned women against developing their intellect. Of course, this is one of the most frustrating sexual hypocrisies; men champion intellect and reason as a guard against passion but warn women that a strong mind will dilute feminine charms.4

In 'Emancipation and Transgression in Love', Adler and Lécosse address a further frustration. Traditionally, many women have identified femininity as primary weapon in the war of the sexes, leaving less-effective passive aggression to the shrew. Courageously, certain women, real and imaginary, have left the battlefield, refusing to define themselves in male terms. Some of them appear in this section, from the biblical Potiphar's Wife (seen here in a Dutch painting on oak, c.1490–1500) to poet Sappho, who suffered and created for love (shown in Gustave Courbet's Sleep from 1866) to Salvador Dalí's muse Gala (in his Leda Atomica from 1949) to Claude Cahun's Self-Portrait (c.1938) and Tracey Emin's confessional series of neon lights, You Forgot to Kiss My Soul (2001).

The final sections ('Women and Power' and 'The Eternal Feminine: Muses, victims and femmes fatales') are a bit sprawling, with an even more diverse range of women fitted into the editorial mould: political lionesses (Helen of Troy and Cleopatra); art patrons (Isabella d'Este and Madame de Pompadour); symbols of devoted womanhood (Abelard's Heloise and Victor Hugo's Juliette Drouet); a 9th-century Japanese poet (Ono no Komachi) and 20th-century sculptor (Camille Claudel); wife of an abdicated king (Wallis Simpson) and wife of an assassinated American president (Jacqueline Kennedy Onassis); Hollywood film icons (Rita Hayworth and Marilyn Monroe); and one spurned muse (Picasso's Dora Marr, shown in his Weeping Woman from 1937). Many of these figures fit well into other sections, or in multiple sections. In fact, it is difficult to refrain from variously recasting the curatorial framework.

Given the range of women discussed and artistic styles represented in Dangerous Women, readers would benefit from insight into the authors' choices. But even without a stronger tether, readers can enjoy this collection of some of the most beautiful portraits of women in the history of art. Filled with as many ambiguities as its subject, Dangerous Women begs to be revisited, argued and shared. The work that brings Dangerous Women to its close, William Wegman's photograph of costumed Weimaraners posed for Cinderella's Sisters Preparing for the Ball (1992), reminds one that, despite the swirl of claims and controversy surrounding Woman – her agonies and ecstasies, trials and triumphs, losses and loves – She is, most of all, to be appreciated in all of Her glory, taken seriously and with humour.

References
1. To be released in January 2010, the 160-page hardcover volume, Dangerous Women: The Perils of Muses and Femme Fatales by Laure Adler and Élisa Lécosse, contains 100 colour illustrations and retails for UK£22.50/US$39.95.
2. Dangerous Women, p.15.
3. One of the authors' 'Women of Power', Agnès Sorel served as model for Jean Fouquet's Madonna and Child Surrounded by Angels (c.1452). Mistress of King Charles VII of France, Sorel (1421-1450) wielded great authority over the king, spending his money on lavish purchases. In their commentary on the portrait, Adler and Lécosse suggest that 'Few works mix the divine and the human, the sacred and the profane to the degree of the Antwerp Madonna. The simplification of forms and the hues, which verge on the abstract, sublimate the humanity of this Virgin, who is in truth a real woman tinged with a chilly eroticism'. Dangerous Women, p.129.
4. Dangerous Women, p.29. Adler quotes Kant from his Observations on the Feeling of the Beautiful and the Sublime (1764) on the consequences to women of developing the intellect. 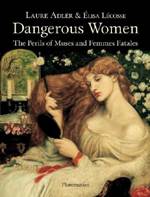