Although these four solo exhibitions – hosted side by side – are each distinctive, they all contain “slow” works that make you focus on them as they present ideas about abstraction, painting, sculpture and beauty 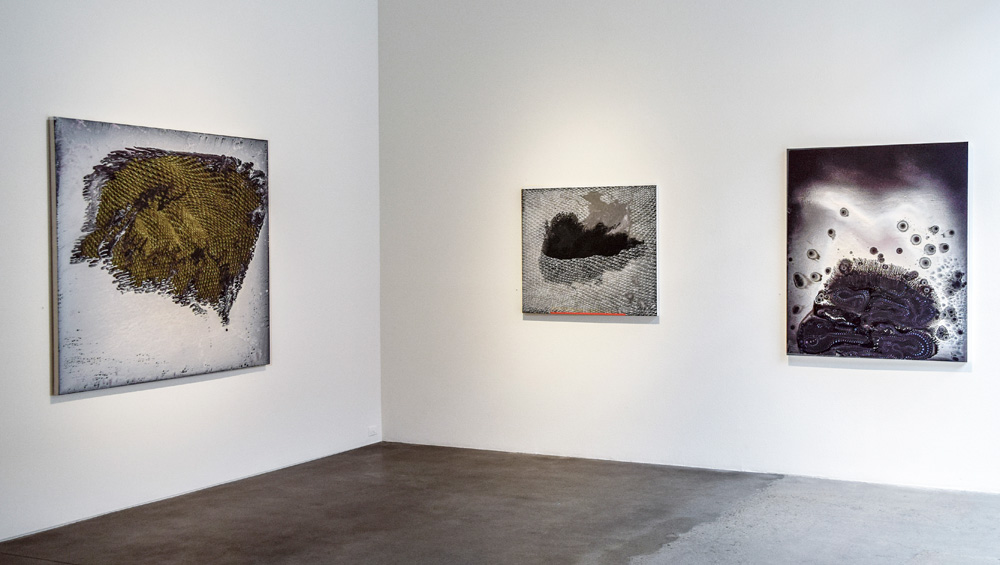 Robischon Gallery in Denver, Colorado currently has four exhibitions of abstract art on view in its elegant spaces, reflecting the general resurgence of interest in non-figurative painting and sculpture. The artists (all women, although one day that will no longer be notable, I hope) are bi-coastal: Linda Fleming (California/Colorado); Jaq Chartier (Washington); Barbara Takenaga and Alison Hall (New York), the last three newcomers to the gallery, or nearly so, while Fleming has 10 previous outings to her credit. Although the shows are solos, each with its own distinctive visual language and resolutions, their proximity encourages comparisons. Among the traits the three painters – Chartier, Takenaga and Hall – and sculptor Fleming share is their commitment to the perceptual, the process-oriented, materiality and purposeful deliberation, even if some of the works seem more spontaneously combusted.

In Allusion, the title of her show, Fleming is represented by three rhythmic wall reliefs and a series of marvellous gouache and graphite drawings in a wide range of colours that she explains are instrumental in the creation of her intricately, endlessly entwined open-weave sculptures. While the drawings and metal sculptures balance and inform each other, it is the wall reliefs – two are of layered, multicoloured powder-coated steel and the third is a silvery chromed steel – that are, well, the scene-stealers. 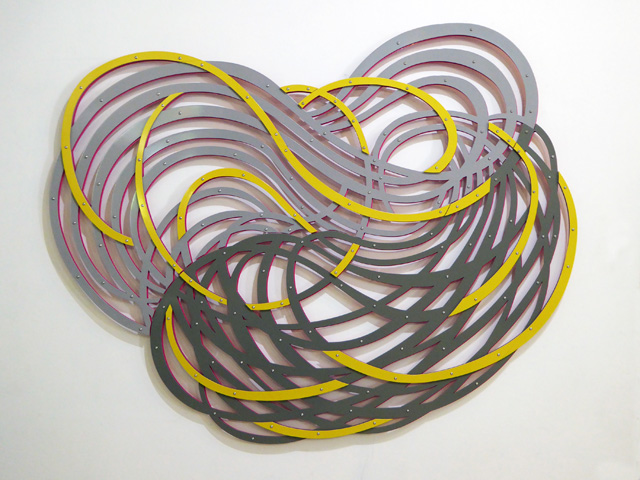 They are called Swoop (2018), Evening Breeze (2017) and Gossamer (2018) respectively, designations that seem at odds with the adamancy of their medium, but Fleming miraculously transforms intractability into something astonishingly lissom and delicate as the patterns twist and turn, the positive and negative spaces visually interlocking and of equal impact. The most clearly illustrative of this optical equivalence is the gleaming Gossamer, with its beckoning, radiant surface that is both positive and not, the mirror-like bands dissolving into insubstantial reflection. It is a work in flux, the movement both simulated and factual, recording whatever is passing in front of this looping semblance of a spin cycle, a phenomenological whirl, telling us something about mutability and matter.

Manifold, Takenaga’s debut solo, showing her at the top of her form, takes the same name as the most dazzling of her paintings on view here. A five-panel beauty, Manifold 5 (2018) extends nearly 19ft (5.8 metres) and swings provocatively between abstraction and representation. Its imaginative patterns conjure spouts of water, votive candles, landscapes, seascapes and much more, fragmenting into patterns taken from a host of cross-cultural sources, the most ubiquitous of which is a fish-scale motif. 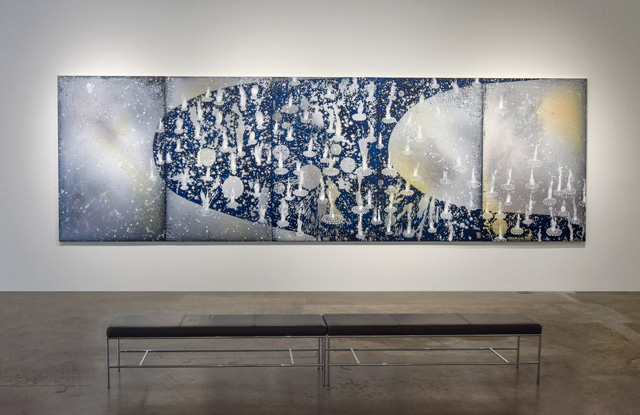 Often representing stylised waves in traditional Asian art and design, she inscribes them in countless repetitions and permutations to painstakingly weave an airy, tensile web across the surfaces of her paintings, a kind of trademark. Takenaga’s typical palette here is sombre, but the effect is not, the deep blues, blacks and lustrous silvers ravishing, comparable in splendour to a night sky, darkling seas, the vastness of outer space.

Their opulence is further heightened by the subtle sheen of areas washed by paint as pearlescent as the nacreous interiors of certain seashells. Added here and there, sometimes in a swath that sweeps across much of the foreground plane, they change shades – depending on where the viewer stands, which skews the angle of the light – across a range that includes the most tender of pinks to shimmers of violets and greens, the shift activating the surface through reflected and refracted light in a way not so different from the visual shifts captured by Fleming’s Gossamer.

Chartier is deeply engaged in observing the process of painting and paint’s chemistry and physics, her practice one of the more tightly linked explorations combining art and science. In doing so, she edges beyond the scientific as the quantifiable touches on the poetic and the metaphysical. She uses, among other techniques, chromatography and DNA gel electrophoresis to analyse and tabulate the constituent properties of paint through a process of separation. The data gathered becomes a kind of coded portrait (some resemble chromosomal imaging), a biography of selected paints and colours through the interaction of time and specified circumstances. All this, she notes and meticulously tracks, documenting each stage as each stage disappears, the original painting no longer present, always in transition.

Her Suntests, here from 2017-18, began as a way to determine the relative stability of different colours, but she found herself more and more attracted to fugitive shades and their ephemerality, as well as to the fluidity of matter in general. The results are arresting: columns and cartouches of translucent, jewel-like colours: haloed, blurred, brilliant, fading. In addition to the deconstruction of the physicality of paint and the charting of the impermanence of matter, the ultimate subject is time and the poignancy of the human condition, held hostage by it. 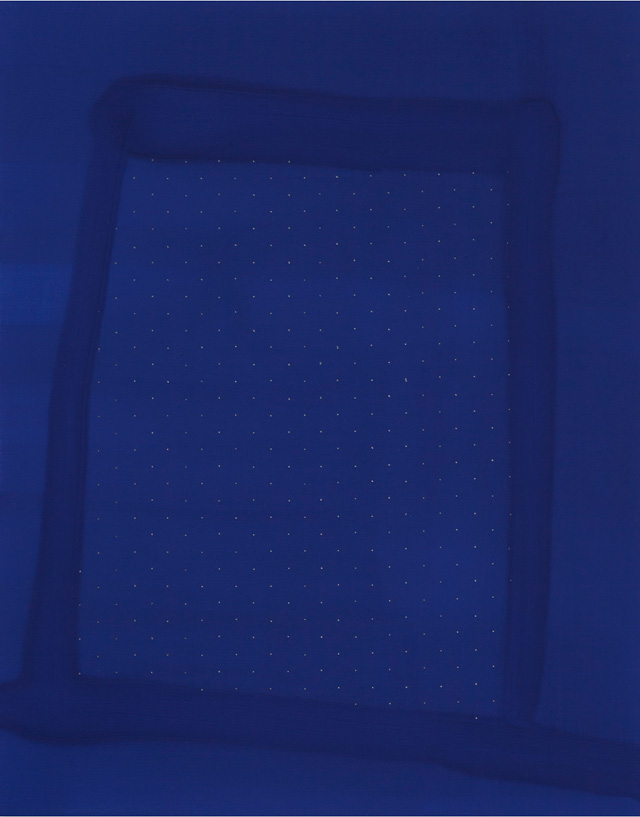 Hall’s rich, velvety blue and black monochromes (depending on how rigorously that term is defined), from 2017-19, are variously scaled, discreet, densely concentrated works, her treatment of those colours very different from Takenaga’s. Ad Reinhardt inevitably comes to mind, as well as others, but Hall’s project is worlds apart from the (predominantly male) minimalist ideologies of that earlier period. Constellated by the glint of graphite marks and other details that hint at imagery and memory, her show is called Heirlooms, her paintings frequently inspired by the art and architecture of Renaissance chapels and their frescoes and mosaics.

For instance, in Ancestral (2017), the elusive figure of the Virgin Mary might be tantalisingly glimpsed before it melts into the painting’s indeterminate, cloaking darkness, only to emerge again, depending on external conditions. Incidents appear and disappear, are lost and found like treasures from an archaeological dig, to be gradually excavated by a patient, attentive eye. You sense the weight of the paintings and how much they have absorbed, how much care has been lavished in their making, from the smoothing and refining of a traditional plaster ground to the countless repetitive, meditative, ritualistic markings out of which they are constituted. Hall’s process and narratives are sourced in painting’s own storied history, but what is included also feels deeply personal, encrypted and folded secretly into the painting like talismans or prayers, visible and not.

These are “slow” works that make you focus on them as they present a spectrum of ideas about abstraction, painting, sculpture and beauty. Above all, it is evident that they share an inclination for aesthetic pleasure, which they provide in abundant, absorbing measure. 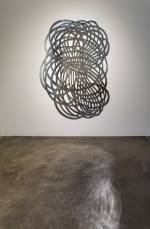 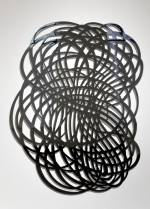 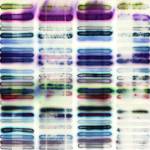 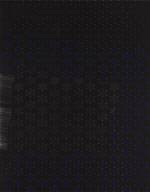 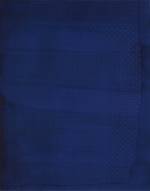