Weaving a path in and out of Peter Welz’s awkward steel architectural intervention, the viewer comes up close and personal, in an unsettling way, with Michaela Zimmer’s layered canvases. Scratch the surface and there is far more to be told than at first meets the eye

Fold Gallery in Fitzrovia, London, might be so-called for good reason – an awkward configuration to curate, it literally folds around the corner, creating an L-shape, in which it is impossible to step all that far back from most of its walls. It is the perfect space, however, for the current installation, which comprises paintings by Michaela Zimmer (b1964, Berlin) and an architectural-cum-sculptural intervention by her fellow Berlin-based colleague Peter Welz (b1972, Lauingen, Germany). Working together, they have turned the space into a bisected corridor, a climbing frame (although I am not sure that climbing would be encouraged), or discarded scaffold, which visitors are required to walk through, becoming a part of the work, interrupting and intervening themselves. 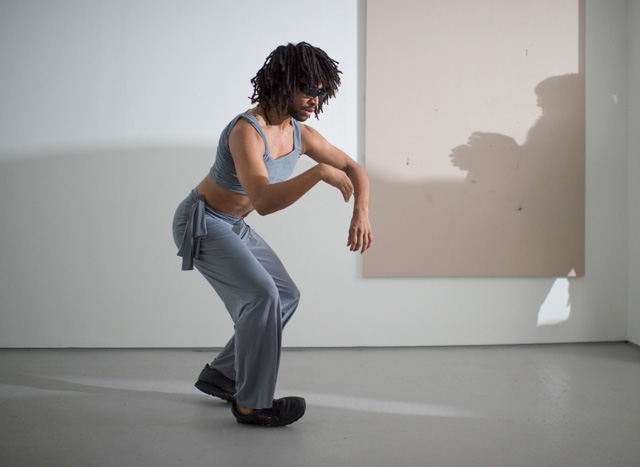 Miguel Altunaga, a member of the dance company Rambert, performing on the opening night. Photograph: deborahjaffe.co.uk

“Physical awareness of spatial conditions is as much the origin as it is the content of my work,” says Zimmer, who trained in dance and has a history of collaborating with performers. In fact, on the opening night of this exhibition, Miguel Altunaga, a member of the dance company Rambert and with whom Zimmer has been collaborating for a number of years, performed the latest iteration of Labo(rat)ori, their ongoing project, and the first instantiation for which he was both choreographer and performer. Using the physical structures present, Altunaga contorted and cavorted his body rhythmically, silently and shudderingly, communing with and reacting against the confines – including the audience members – and the challenges posed. It was breathtaking to watch and made everyone in the room hyper-aware of their own physical presence and the space they were taking up. 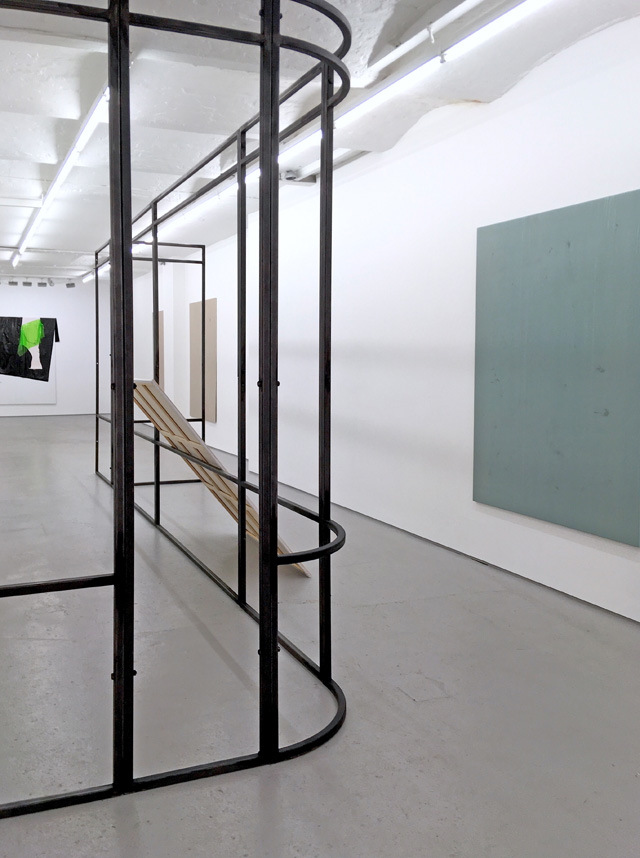 In the same way, Zimmer’s paintings respond to and converse with Welz’s dramatic statement. The work 180106 stands propped against a steel crossbar, discarded, uncared for, causing visitors to step around it, intriguing them, yet making them nervous about stopping and looking, giving them an uneasy sense of dominance as they lean down into this unconventional viewing space. The bare flesh tones of the canvas appear trampled on, bruised, even maybe abused. Several of the works on display have a similar surface: 180104, made deliberately imperfect with black marks; and 180103 and 180107, similarly flesh toned, and covered with polymesh, which appears, to all intents and purposes, like fishnet stockings stretched taut across the damaged skin beneath. The work 180103 additionally has very pale blue scribbles on its surface – so pale you don’t at first notice them – veins, or faded bruising perhaps? The netting, too, is so fine that it seems, at first glance, just to be the surface of the canvas. 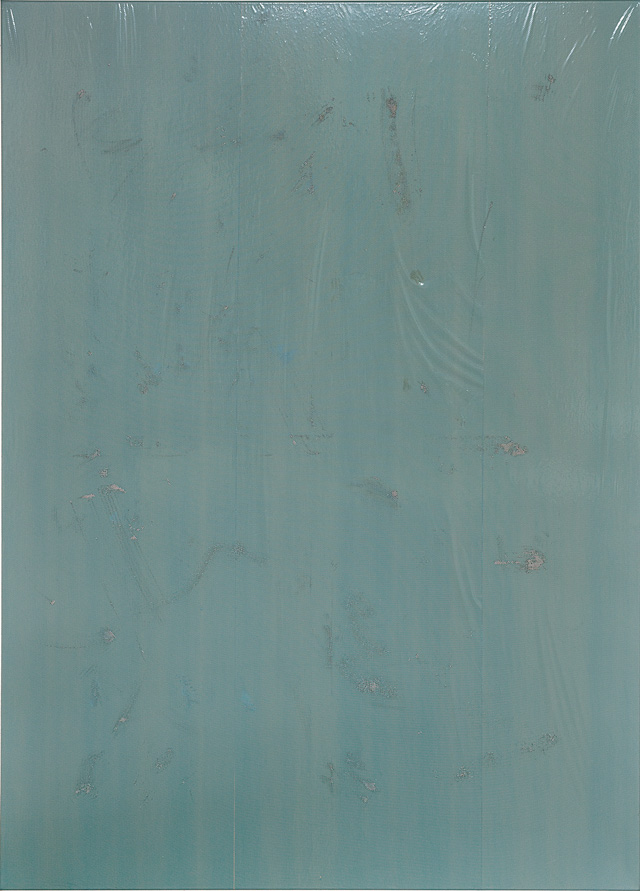 Zimmer describes these canvases as her “slow paintings”, as she takes her time – months sometimes – to build up the strata, starting first with translucent layers, resulting in light and colour gradients, before the mark-making stage, using a variety of tools to record infinite traces, and then the final layers of paint, polymesh, or polyethylene (PE) film. The gestures she uses to make the marks are basic manifestations of physicality – again evidence that this is what is at the core of her thinking and her work: a recognition of existence, of bodily presence, of entropy. During a residency at Liverpool Museums in 2000-01, Zimmer took photographs of private performances, capturing her activity and interactions with her surroundings, and the moment when bodies – moving and static, alive and manufactured – merged and became single sculptural entities. The marks on these canvases can be read in a similar way – as evidence of existence, of motion, of encounters, both good and bad. 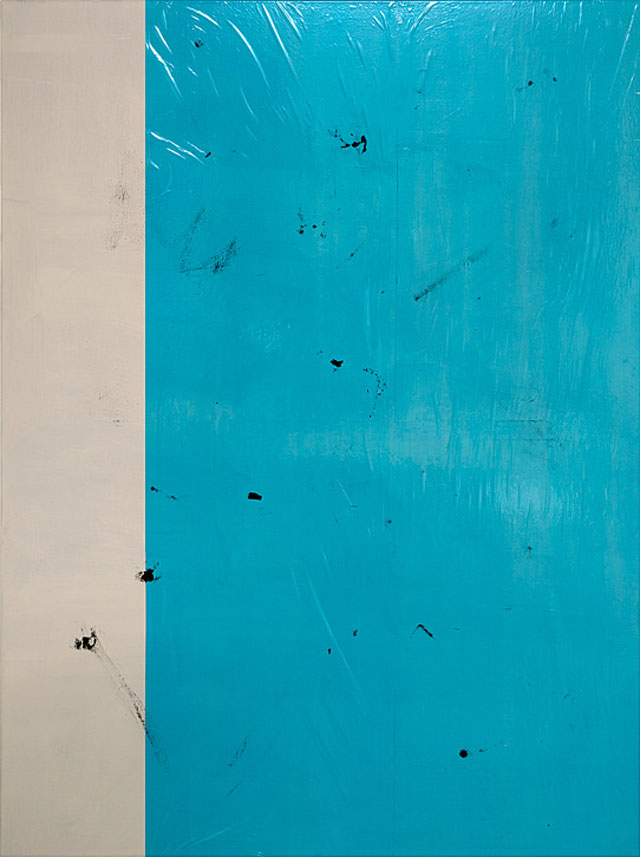 The pale blue, turquoise colour of the scribbles permeates the space on numerous other canvases, including as a film across 180102, through which the scuffs and stains acquire a far more sinister appearance, possibly being spilled blood. Two thin vertical lines trisect this canvas – tiny gashes where there is no film – like Barnett Newman zips. And this is no doubt more than a coincidental similarity, since Newman, who believed deeply in the spiritual potential of abstract art, would have loved the physical challenges of this gallery space, and the way it forces viewers up close and personal to Zimmer’s sublime expanses of fleshy tone. His own immense work Vir Heroicus Sublimis (1950-51), broken by five such vertical zips, was intended to overwhelm the senses. The natural instinct of the viewer is to step back from the canvas to see it all at once, but Newman instructed precisely the opposite. By creating a viewing space in which visitors are physically unable to step away, Zimmer effectively achieves this same goal. 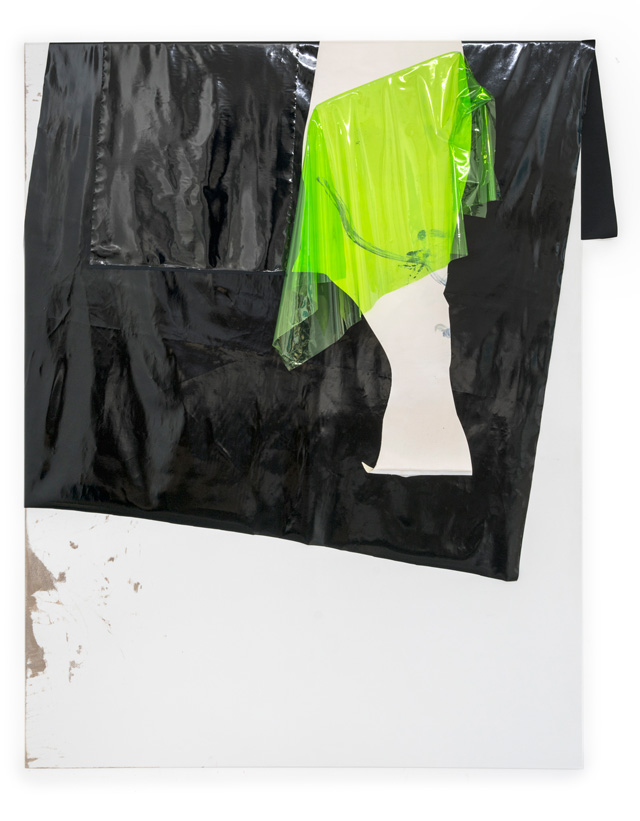 At the back of the gallery, 180104 dominates: a white (although look closely and, again, there is far more to it) canvas, with black oilcloth and luminous lime-green film seemingly casually thrown over the top. There are echoes of Angela de la Cruz, who slashes, twists and reforms her frames, calling into question the very definition of a painting as something with a 2D physicality. Here, Zimmer, too, teeters on the boundaries of what might be called painting or sculpture or installation. But does it really matter? Do we need to know? Does the object – and the artist – necessarily need to conform? In an existence where matter is permanently in flux, can anything ever be captured in a perfectly delineable form – intransient, fossilised, eternal? Isn’t everything rather just an ever-thickening palimpsest of traces, of things gone before, of histories and experiences? Just as the camera freezes an instant of motion, creating a permanent inertia, so, too, these canvases seem to have been stopped in their tracks, come to a perennial standstill, but for those who take the time to look, their histories and timelines can still be read.

At the opposite end of the gallery, facing this deep, dark blackness, hangs a pair of two white-smeared canvases, with rainbow-coloured strips forming two frames. Perhaps this is the “after white” of the exhibition’s title – the full spectrum that itself comprises the traces of this bright white light. As the cycle of time hesitates, there is some uncertainty as to whether these canvases are blank and awaiting activity or so covered with a rich rainbow of hues that the individual components can no longer be discerned. Is this how life proceeds? From one instant to the next, from one embodiment to the next? Traces layering and dispersing, reassembling and recreating, much as bodies moving through space, navigating their way around obstacles, and along passages, in and out of the light? As we weave our own way in and around Zimmer’s and Welz’s works, we, too, leave traces of moments never to be regained. 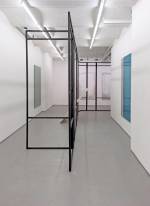 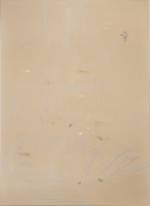 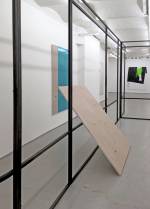 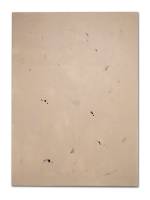 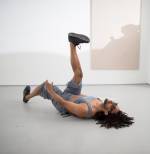