The death of Achille Castiglioni towards the end of last year is a sad reminder that time is running out for a triumvirate who have dominated design in Italy since the Second World War.

The two remaining members are Magistretti and Sottsass, the former renowned mostly for his furniture and light fittings, the latter for breaking all the established rules of design. This he did when he mixed precious and non-precious materials, and bright colours along with patterns that recalled the American diners of the 1950s, for the furniture and light fittings created for Alchimia and Memphis at the beginning of the 1980s.

Unlike Sottsass, however, Castiglioni was not a radical in the sense of setting out to destroy the conventions of design that run in a linear progression from the Arts and Crafts Movement at the end of the 19th century to the Bauhaus of the 1920s and Scandinavian design of the 1950s. Where he was a radical was in his ability to select ordinary objects and transform them, just as Duchamp did when he presented a urinal which he called ‘Fountain’ for an exhibition in New York in 1917, and just as Man Ray did when he added an eye to a metronome in his ‘Indestructible Object’ of 1923. In Castiglioni's case, the transformation began when he turned a tractor seat into a respectable piece of furniture for Zanotta in 1957, and a standard car lamp into his Toio light fitting designed for Flos in the same year.

Born in 1918, Castiglioni was a year younger than Sottsass and two years older than Magistretti and, like the other two, was trained as an architect, in his case at the Politecnico di Milano immediately before and after the Second World War. On graduation, he was one of the forces behind the establishment of the Milan Triennale, the Compasso d'Oro (Golden Compass) Design Awards and the Associazioni per il Disegno, all set up in the 1940s and 50s. He was also a contributor to the magazine, Stile industria, which charted the rise of Italian design in the post-war era.

During the incredible period of reconstruction that took place in Italy after the Second World War (much of it paid for by Marshall Aid), Castiglioni taught architecture in Milan and Turin, and ran a design office with his brother, Pier, who died in 1968. The office concentrated on exhibition and product design and among its most notable exhibition designs were the Pavilion RAI at the 16th Milan Fair in 1958, which was notable for its forest of towers topped by radio and TV masts, and the Montecantini Pavilion at the Milan Fair of 1960. This was dedicated to new uses for plastics.

The office was also in the forefront of Italian industrial design, using new materials, experimental forms and advanced technology for (among other things), light fittings, furniture, domestic equipment and products for Brionvega (including a celebrated radiogram), ceramics and glassware.

It was during this period that Castiglioni demonstrated his mastery of simplification allied to impeccable manufacture. In the Arco and Taccia light fittings, designed for Flos in 1961 and 1962 respectively, the former is a marble base supporting an arc of aluminium terminated by a simple, spun aluminium reflector, while the latter consists of three basic but very refined components - a metal base, and a glass bowl and reflector. Both fittings were often seen in the most up-to-date interiors of the time. The same meticulous care over the way in which components are put together distinguishes the Sanluca armchair designed for Gavina in 1960 and the condiment set designed for Alessi from 1980-84. The latter is particularly notable for the ingenious counterweight used to open and close its lids.

The work undertaken by Castiglioni remained as varied in its range and as consistent in its style after his brother's death. He continued to design exhibitions, including ‘Design since 1945’, in Philadelphia, and ‘Shakers’ shown in Milan (both in 1984) and the ‘Lumiere je pense a vous’ shown in the Pompidou Centre, Paris in 1985. Interior designs included showrooms for Cassina and Flos, furniture for Zanotta and Macatre (among others), and accessories (besides the condiment set already mentioned) for Alessi. These included the dry cutlery set and a spiral ashtray. Indeed, some designs were actually 30 years old: Castiglioni was simply waiting for someone to make them! He also managed to design a few buildings, including a church, a school and an office block, all in Italy, and was head of the Faculta di Architettura in the Politecnico di Milano from 1965-77.

Although the range of work equals that of the other two members of the triumvirate, what distinguished Castiglioni particularly (and made him different from Sottsass, who has always been obsessed with death) was his belief that life should be fun. Indeed, he refused to accept commissions that he didn't think he would enjoy carrying out. Thus, when people visited his office in Milan, a mirror at the entrance deceived them into thinking that the office was straight ahead (which it wasn't), while a product such as Snoopy (designed for Flos in 1967) had to have a marble base to prevent the dog-like lamp from falling over. So Castiglioni's legacy includes not only products that are among the best to come out of Italy, but also products that can make one smile. 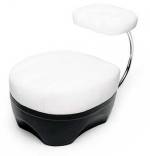 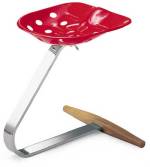