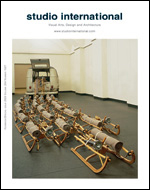 As the 5th century BC Greek philosopher Heraclitus said, ‘Everything flows and nothing stays’. Or put another way, one might add, ‘All years are the same, but each is different’. Viewed from the Studio International Editor’s chair, this year it was Asia that produced many surprises, as our contributors have made clear, from ‘Archilab’ (page 16) to ‘Chinese Cities’ (page 134) to Japan’s Chichu Art Museum (page 260), a subterranean location for showing five artists, including James Turrell, to advantage. Then the amazing range of Chinese work exhibited at the Mori Gallery, Tokyo (page 282) demonstrated the growing momentum of cross-fertilisation of ideas within Asia. By contrast, in ‘Yongle’ at New York’s Metropolitan Museum of Art (page 110) came a reminder of the historic originality of medieval Chinese art. ‘The Elegance of Silence’ (page 66) explored the resilience of East Asian contemporary art and found that the sense of tradition which as much bedevils Western art as inspires it also recharges together the art of Korea, Taiwan, Japan and China. India’s MF Husain, one of the subcontinent’s best painters, was celebrated at the age of 90 by an exhibition at the Arts House in Singapore, where the artist dwelt on ‘lost human values’, as epitomised here by his painting, ‘Andy Warhol versus Marilyn Monroe’. Husain crossed global cultural frontiers, and yet across his long career his work remained unassailably Indian.

Still tradition permeates Western art in ways that can constructively lead to reappraisals, a preoccupation which currently seems to dominate curatorial thinking. For example, the paintings of Frida Kahlo at Tate Modern (page 86), reviewed by Janet McKenzie, reveal an artist struggling to break out of such constraints. If Kahlo was driven to suicidal despair in Mexico by her relationship with Diego Rivera, we also have to consider where she would have been without his compelling genius. In the self-portraits of Andy Warhol (page 62) his own inner struggle with an overweaning consumerist culture reveals the extent to which his creativity itself was threatened. Here too, Francis Bacon’s introspective self-portrait (1987; page 126) revealed a different seam of nihilism, on the edge of the abyss of all time. The optimistic nature of Jeremy Moon’s paintings, also reviewed here as a lost memory, stands as a reminder of the tragedy of his early death in a motorcycle accident in 1972, but also of that similar death almost two decades later of his brilliant advocate, the writer Peter Fuller. Moon had followed his Cambridge degree with ballet classes – so celebrating an intellectual release; something of that is revealed in the strength yet lightness of touch of his paintings reviewed here
(page 72). Our reviewer drew parallels between this and the work of Oskar Schlemmer in his ‘Triadic Ballet’ (1919). The Rocket Gallery in London is to be congratulated for returning Moon’s work to the public eye.

The Brooklyn Museum’s superb Basquiat exhibition (page 48) was reviewed as a major event: Basquiat was a child of Brooklyn, and a sense of deep roots ran through Basquiat’s work. He showed what an artist could achieve in a tragically truncated span of eight years in painting. New York City hosted three major events in particular in the year: first in importance, of course, was the star-studded relaunch of the Museum of Modern Art (page 292). The Whitney celebrated Robert Smithson’s career with a live replication of his famous ‘Floating Island to Travel Around Manhattan Island’ (page 122), which so tellingly preceded the global focus on the environment. In contrast, the Guggenheim Museum provided a détente in the form of ‘RUSSIA!’ (page 172), a blockbuster which perhaps may be the last such exchange.

Paris gave us, in the Pompidou Centre, ‘Big Bang: Creation and Destruction in 20th Century Art’ (page 116), typically focusing on ‘the creative destructiveness of Modern Art’. This was intended ‘to shatter existing values’. The cyclical impacting of art galaxies may again be on the dark edge of an even bigger bang. This controversial exhibition ran on into 2006. In London, Joseph Beuys’s work was well exhibited in a retrospective at Tate Modern, revealingly reviewed by Richard Demarco (page 28). ‘The Pack’, chosen for our cover, must now be acknowledged one of the great works of the last century.

A yearbook to the electronic version of Studio International can only hold a small selection of our reviews. The printed words give us back our memories more tangibly. It is a ‘palimpsest’ (a manuscript used one or more times after earlier writing has been erased). The printed articles stay here in palimpsest as though on parchment. Electronically, they may be wiped, and certainly swiped, by the student body. But that is the nature of our knowledge-based universe.

As Editor, I am pleased to acknowledge with thanks all the institutions and individuals who permitted Studio International to access and reproduce material from their hard-won endeavours, the product of an outstanding year. Also, thanks to our growing band of global contributors for their tireless investigations and prompt delivery on schedule. 2005 resulted in a brilliant, if unorthodox, editorial harvest. As Heraclitus also said, ‘You cannot step into the same river twice’.

To this end, the yearbooks now serve as a memento as they build up in sequence together.