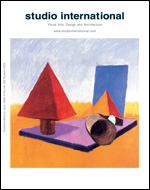 This publication is a diverse collection of our most exciting exhibition reviews that appeared on the Studio International website from 2000 to 2003. There are detailed studies of a range of artists (from Auerbach to Avery and Riley to Rosenquist) in the fields of visual art and architecture, in addition to artist biographies and obituaries. This vibrantly illustrated volume is a must for anyone interested in art appreciation and the most recent developments in the art world, both in the UK and abroad.

The Studio International web edition, showcased in 2000, was planned as an electronic publication only. In response to our ever-growing number of readers visiting the website, and to continue our great tradition that began in 1893 with The Studio, we are pleased to publish this Yearbook. We are represented across the globe, and in addition to our European and North American coverage, we have correspondents in China, Japan, Russia, Australia and Latin America.

In the current tumultuous world, where war and terrorism override other topics, to concentrate on art appreciation and analysis could seem esoteric and irrelevant. But recent surveys show that communities which encourage the arts thrive economically. A good example is in northern Spain, where Frank Gehry's Guggenheim Museum Bilbao, opened in 1997, is a tourist destination that began a revival of the area.

Some of the most exciting recent developments have been here in London. The British Museum has been transformed by Norman Foster's Great Court, opened by the Queen to celebrate the new millennium in 2000, which has infused new life into the grandest and most accessible of the world's major museums. Lord Foster's ability to blend classic and futuristic architecture had been demonstrated with his Sackler Wing addition to the Royal Academy, which won the RIBA Building of the Year award in 1992. The adaptation of a dilapidated power station to create Tate Modern has proved a success and enabled the original Tate to update and breathe. Another addition to the South Bank is the Saatchi Gallery, although the work of contemporary Young British Artists wrestles unhappily with the baroque interior of the County Hall building. One master curator to be noted is Neil MacGregor. As Director of the National Gallery, in June 2000 he mounted the superb 'Encounters' exhibition, which featured a rare collusion of the art of the past with contemporary work. Shortly thereafter he moved to the challenging Directorship of the British Museum, where the opening of the Enlightenment Gallery late in 2003 explored the essence of what the museum has always been about - recalling the great period of scholarship and the expansion of learning globally, which the 18th and 19th centuries had encouraged in Britain. For all our electronic wizardry today, we are hard put to match this expansion and its outreach into the new century.

The decision to publish a yearbook enables us to gather together this electronic range of articles from early 2000 to December 2003. We have given a high priority to the medium of painting - the great and historic formative medium which still dominates contemporary developments. The New York exhibition of the brilliant works of Gerhard Richter led us in London to wonder why he has never exhibited here before. The parochialism of the art world can still surprise, for all the speed of communication today.

In the early 1980s it took two to three months to publish an article. Today, the maximum lead time can be in the region of just hours. This particularly facilitates our international coverage and it transforms the language of critique in the visual arts. To be able to receive and post review material while an exhibition is still running is valuable.

We will next expand and diversify further. Architecture has become (at last) much more press-worthy. Already Studio International has given significant coverage to the new architecture in Europe and America. Our content will be augmented by the inclusion of photography, media art, installation art, land art and sculpture in a broader field.

In Studio International we stand for highest standards of art-historical scholarship in all fields. This situation will continue and since this Yearbook period we have increasingly engaged with new authors and with insightful critique.

We hope you enjoy this volume and that you will send feedback.

See you in cyberspace.