Between Spiritual and Material Spaces: the Photographic World of the Gao Brothers

Between Spiritual and Material Spaces: the Photographic World of the Gao Brothers

Entering the Photographic World of the Gao Brothers, Zhen (1956-) and Qiang (1962-) is to enter a universe of surreal dimensions where social spheres of contemporary China are reproduced through photography and computeredited images.

This technique allows them to construct symbolic structures populated with people, which mirror the man-made society in which we live in. Their images are arresting, thought-provoking, curious, often confusing on first glance, yet also scientific in their analysis of the human condition. This first solo show of the Gao Brothers in the UK investigates personal, international and global space, as they explore the spheres in which humans live side by side – existing, waking, working, eating, sleeping. The duo have been making art since the 1980s, debuting at the groundbreaking 1989 China Avantgarde show in Beijing. Their work bears the marks of growing up during China’s Cultural Revolution (1966-76), which prompted their inquisition into the political and social state of contemporary China.

Nudity prevails in the exhibition and, as well as bare skin and body parts, the Gao Brothers explore humanity’s physical and emotional needs. Exposed through the lens of the camera, expressions and postures capture a wider sense of Chinese society. In Sense of Space – Wake (2000), 14 naked Chinese men curl and compact themselves into a wall of wooden cubbyholes. Their bored expressions and lifeless postures are mirrored by a doll hanging out of a drawer. There is no contact or communication between them, leading us to look inwards to consider the effect of this environment on the individual. The image is a social comment on living standards in China, where personal space in cities is an increasingly unobtainable and expensive luxury, where people are piled into tower blocks, constrained in intolerably close quarters, sacrificing dignity and quality of life. The wooden planks that form the walls of Sense of Space resemble the traditional building material of China and an old-fashioned structure susceptible to the elements.

In Echo (2002), a single woman stands surrounded by metal, the material of modern China. Her bare skin is in contact with the steel structure, the metal curving round her body like an artificial womb; she appears tranquil, eyes closed. The image is at once peaceful, but chilling. It adds an unexpected femininity to the otherwise masculine environment of building, construction and engineering. The built environment is stabilised by the Chinese philosophy of yin and yang (feminine and masculine), where balancing opposite forces is the key to a successful society.

Zooming out to gain a bigger picture, in In Outer Space Project – Map of China (2008), the Gao Brothers present their nation as a piece of honeycomb orbiting in space. Photographed from a real honeycomb, the image has been manipulated to resemble the outline of China and populated with tiny humans who clamour within its niches like worker bees carrying out their daily tasks. The national community is hard at work, but each individual carves out his or her own niche in this post-Mao democratic society. Yet although this is a community, the network is disorganised, sprawling within the boundaries of the country, like the growing population of China. The nation appears as a meteor alone in space, suggesting both China's unique national, political and economic distinctions, and also an unknown potential for power.

The Gao Brothers imagine a global utopia in A New World of Nuclear Cloud Shape (2008), in which a bright green tree in the shape of a nuclear mushroom cloud stretches up into a bright blue sky with white fluffy clouds. Diverse characters populate the tree’s branches, among them religious figures such as Christ, Buddha, Adam and Eve. It is a confusing image of clashing symbolism: Christ, a reference to the west, sits above Buddha, a reference to the east, and while the nuclear mushroom cloud suggests destruction, the tree suggests growth. Could this be an attempt to suggest a cycle of rebirth politically regarding the east and west, using Photoshop? It is an interesting image that takes time to process, and continues to perplex.

In The Forever Unfinished Building series, people from all walks of life exist inside a structural frame of a building. Curator Dagmar Carnevale Lavezzoli compares this series of works to the visual conundrums of MC Escher (1898-1972), as the Gao brothers play with their environment, mirroring the composition and adding confusing anomalies – The Forever Unfinished Building No 2 (2005) and No 4 (2008). In No 2, an astronaut peers down on the scene below where a man reads a newspaper and a car skids into the frame at an angle. In No 4, athletes, policemen, paramedics, animals and even a Spiderman go about their business, immune to the chaotic society. The universe of No 2 is a horizontal zone, suggesting a linear chronology of progress, where everyone occupies a middle ground, whereas No 4 is a vertical hierarchy where, in the skylight, Gothic churches and sleek modern glass buildings form a sort of architectural heaven. Other cultural symbols – the Birth of Venus by Botticelli, the Statue of Liberty, the Olympic flag – appear in the image. Perceived notions of hierarchy are confused as the Gao Brothers reshape physical dimensions and social diversity. In China, cities are growing outwards and upwards, buildings destroyed overnight and skyscrapers shooting up in days. The brothers question the social effects of this economic “progress” by setting their universes in concrete shells of modern buildings, a realistic assumption of how China may look in the future.

Humanist narrative emerges through the use of a wide variation of people from different backgrounds and occupations. Collectively or individually, the subjects of the Gao Brothers’ absurd universe exist in a battle between natural and man-made constructs of space. A nuclear cloud/tree, a digitally manipulated honeycomb in space, the world confined to an unfinished building, are just some of the obscure environments you can expect to enter. The built environment, spiritual or concrete, is shown to have an intimate effect on humanity. The Hua Gallery presents a careful selection of work from the Gao Brothers, which encompasses subtle recurring themes and an attempt to understand China socially in global terms. 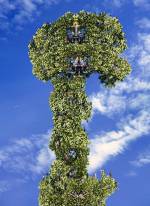