The Beijing National Stadium – Beijing Olympic Architecture in Retrospect I

The modern day Olympic Games has been than just a sporting event where thousands of athletes gather in a host country to compete against each other and challenge Man’s limits in becoming “faster, higher and stronger”. With the impact of mass media and television coverage, it is also an excellent opportunity for the host country to promote and showcase itself to the world. And, as part of this presentation effort, the venue where the opening and closing ceremonies will be held retains the potential to be the architectural icon for the Games.

In the run-up to the 29th Olympic Games in Beijing 2008, China spared no effort in announcing to the world the arrival of China as an economic superpower on the world stage. Old stadiums were refurbished and new ones built. The Chinese are determined to build bigger, better and more inspiring sport venues. And, among the new ones built, the Beijing National Stadium has been the crown jewel of the entire Beijing Olympic Games building boom.

Located at the centre of the Olympic Green, the Beijing National Stadium is the centrepiece of the Olympic ground. It stands on the imperial axis of Beijing, extending the line 8km from the Forbidden City. Designed by Pritzker Prize winners Swiss architects Herzog & de Meuron, it is the largest steel structure in the world, measuring 330 metres in length, 220 metres in width and 69 metres in height. It can seat 80,000 spectators and was further configured to house a staggering 91,000 spectators during the Games.

From afar, the elliptical-shaped Stadium resembled a coil of ‘silver threads’ all bundled up together to form this giant vessel shaped like a Noah’s ark or even a big whale emerging from the sea. As one approaches, on closer look, the ‘threads’ are actually twisted and torque steel structures all integrated and ‘meshed’ together such that one cannot differentiate between the wall or the roof or the structure or even if they were mere decorative steel works. This lattice structure had formed a porous shell that engulfed the entire external surface of the Stadium. Quite typically, the Chinese has affectionately nicknamed it the ‘Bird Nest’ as its everlasting beauty awed masses and captured people’s imagination as time grows, beyond the Games of 2008.

Symbolically, the curved steel structures and inflated elliptical shape and asymmetrical proportion give one a hyper-realistic and passionate sensation, as if the ‘silver threads’ are trying very hard to control and subdue the force from within which is trying to extend outwards in all directions. Philosophically, it can be interpreted as representative of the upcoming of China - a surging, tempestuous and turbulent force that is raring to go and yet controlled.

When one walks in close proximity to the Stadium, the ‘silver threads’ begin to resemble a mythical ‘Forest of Steels’ that exudes a charm with its seemingly chaotic and non-uniform lines. This is the porous shell of the Stadium. It is the structure, the wall, the roof, the façade, the circulation stairs, the extended threshold whereby the spectators can enter the Stadium from various points. The interplay of light and shadow of this ‘skeletal skin’ adds another layer of richness that presents itself differently to the visitors according to the time of the day.

Inside the Stadium, the experience is somewhat subdued as compared to the exterior. The signature China red is found adorning the ceiling of the concrete seat bowl whereas the spectator seats are coloured in a hue of red and white, forming an abstract gradation pattern in marked contrast to the green field below. The original retractable roof has been replaced by a permanent roof of translucent membrane, bisected into different pieces like that of the exterior shell. When night falls, the Stadium assumed a different transformation with its fiery red and warm yellow tone illumination, presenting the ‘silver threads’ as silhouette instead, but one that still overwhelmed and charmed the visitors.

In the history of great Olympic stadiums, there are limited great pieces of architecture. The Olympiastadion for the 1972 Munich Olympics, designed by the German architect Günther Behnisch and engineer Frei Otto, was considered revolutionary for its time with its use of large sweeping canopies of acrylic glass stabilized by steel cables. The idea was to imitate the Alps with the sweeping and transparent canopy symbolizing the new democratic and optimistic Germany.

The Beijing National Stadium is a creative collaborative outcome between foreign designers and their Chinese counterparts, in the process redefining what it meant to be designing in modern China and how not to directly represent traditional culture. According to the designers, the pattern on the porous shell of the stadium was originally inspired by antique Chinese vases with cracked patterns1. Yet, behind these seemingly arbitrary interwoven silver threads lies a rigorous, rational and geometric structural order that supports the Stadium while staying true to the translation of the original inspiration. It is an architectural and engineering achievement while being a breath of fresh air in interpreting Chinese culture.

Post-Olympics now, it remains to be seen if the Beijing National Stadium will end up being a white-elephant like many of its predecessors. Nonetheless, it is no doubt a radical architectural masterpiece and had achieved novelty in many fronts. In fact, it is more than just a Chinese epic and monument. It is now a global icon – an icon that signifies the pursuit of excellence of an age-old civilization re-exerting its influence in the world. 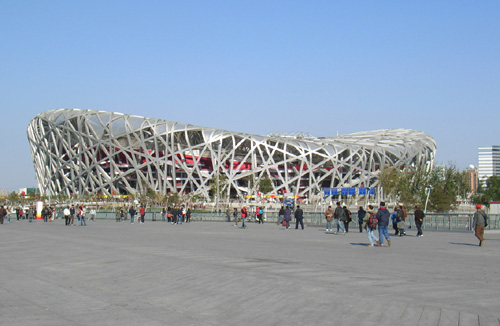 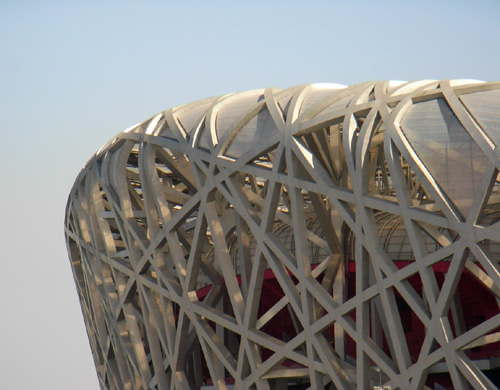 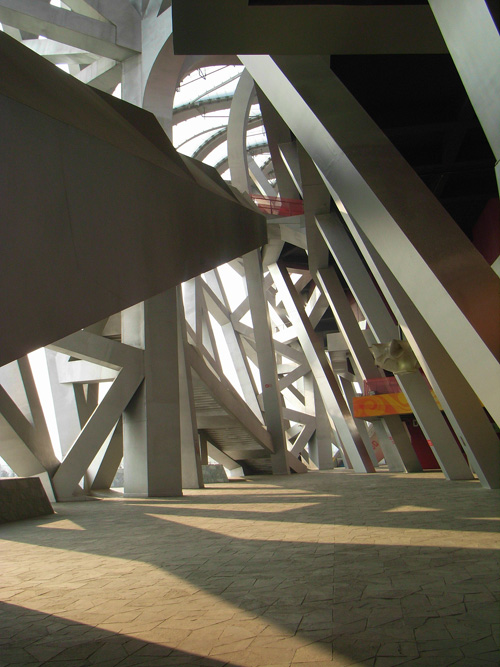 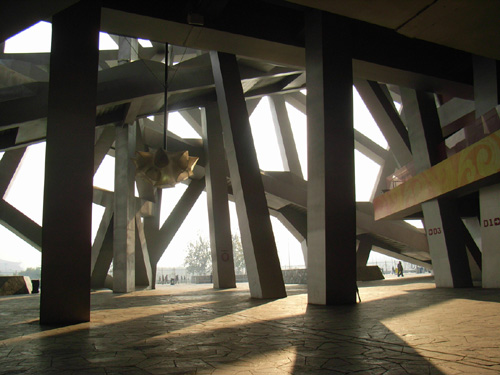 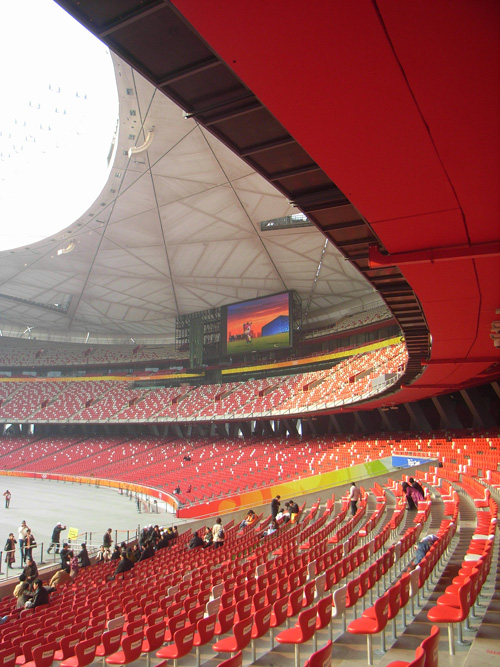 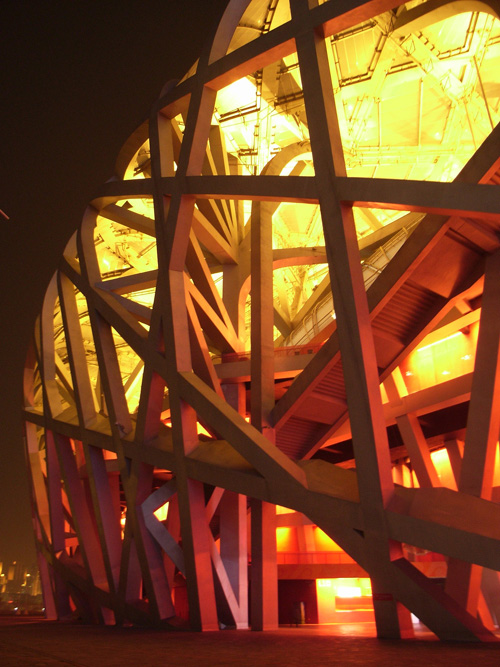 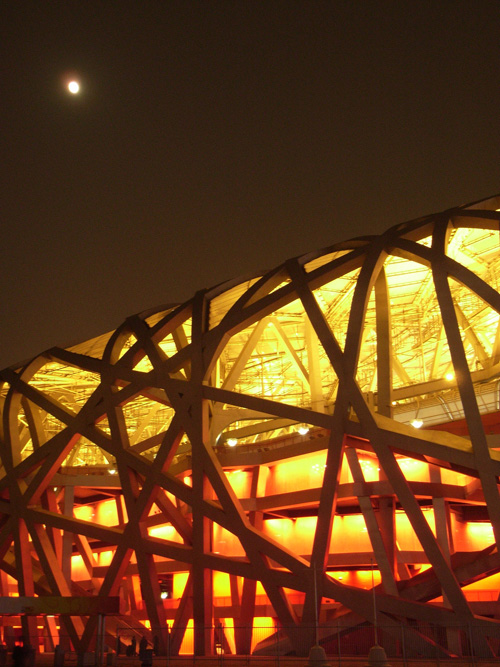