The Raphael exhibition at the National Gallery in London does not extol his skills as an architect in the true tradition of the Renaissance. Nor will even a small proportion of those visiting this landmark exhibition be aware of this fact.

Raphael's great opportunity came in Rome, when Pope Leo X, chose him to succeed Bramante as architect of St Peter's. This was an amazingly courageous decision since at that point, Raphael had not worked on any substantial building at all. He was much influenced by the historic Pantheon. His earlier memorial chapel to the banker Chigi shows this linkage. The dome and drum, with pendentives and crossing points, are typical of Raphael. Carrara marble piers and Portrasanto and dark African marbles, together with Oriental granite, bronze reliefs for the individual tombs, mosaic on the dome, all can be found here, as befits a banker. And here was presented unequivocally Raphael's personal architectural vision

What, of course, cannot be denied is that, like Bramante, Raphael came to architecture through painting. Yet he cannot be called 'classical' as such. Instead, he came to architecture with an inherently pictorial approach. It is true to say that the most powerful architectural spaces made under the patronage of Leo X were not built space, but painted images. Raphael's lessons were acquired through Perugino, beginning with a genre that was unmistakably Gothic at the time. But while Perugino was formally static in his composition, Raphael by contrast draws out the viewer, as in the 16-sided temple in his 'Marriage of the Virgin'.

'Raphael's architecture actively engages the spectator. Raphael in Rome moderated the insistent classicism of Bramante. Attention to the visual apprehension of a building is demonstrated by the justifiably famous 16-sided temple in his "Marriage of the Virgin" (1504). Unlike his mentor Raphael has created a convincing vision of a building that separates it from the realm of background architecture. Its exterior is not a planar surface but a complex assemblage of architectural membering fully developed in light and shade. For instance the angular piers on the lower level respond to the radial transverse ribs of the loggia's vaulting, while on the upper level, pilasters fold around the angles of the polygon. In concept and detail, Raphael's temple is architecturally credible and has the same fully three-dimensional presence that appears in his Madonna figures of the same moment. But what truly puts this temple apart from other painted buildings is how the observer's glance is drawn into the picture by the concave arrangement of its main figures, emphatically continued by their gestures, and led to the vanishing point far in the distance through an open door.

'By accommodating the panel's original position some six feet off the ground, the viewer thus looks not at the architecture but sequentially up, into and through the structure as it were. Raphael's pictorial system thus simulates the viewer's presence within an actual space, just as he was to structure the viewer's perception of the Chigi Chapel a few years later.'1

But to comprehend fully Raphael's true brilliance we need especially to be aware of his underlying proficiency in the specific realm of architectural composition, especially among his peers. Raphael emerges as a true innovator. By the time he was working on the great mise-en-scène of the Villa Madama, he had mastered the details and measurements of Roman antiquity to the extent that he could synthesise a complete, 'ancient' environment.

In the National Gallery, we should take care to discover all the richness and genius of not only Raphael's paintings, but also his architecture contained within, sublimely buildable, even if never built. His architecture remained fragmentary, but should never be marginalised, or worse still, excluded.

On Bramante's death, Raphael had been in Rome for only one year. Leo X therefore deserves much credit for appointing him as architect of St Peter's, yet without a single substantial building to his credit. He felt confident to amend the scheme, which Bramante had left incomplete. At the Villa Madama, towards the close of his own career, he successfully fused architecture, decorative art, performing arts spaces, and landscape design as a single environment dedicated to the life, all'antica. 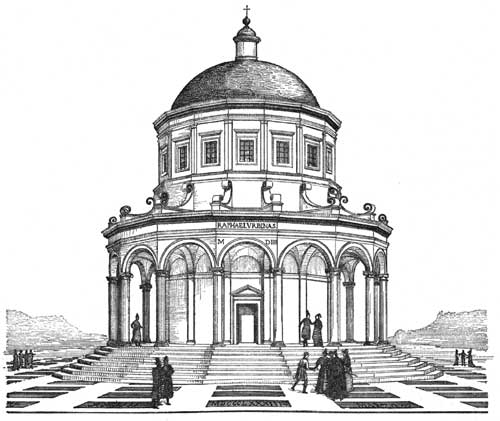