The exhibition now opened at the Metropolitan Museum of Art displays over 100 works by Giorgio Morandi (d.1964). A few New Yorkers still around will remember the much earlier Morandi presence in the 1949 exhibition at the Museum of Modern Art of 20th century Italian art, mounted by Alfred Barr and James Thrall Soby. The latter had recounted how, at first, he was himself dismayed that Morandi was a painter who was weak and repetitious. Later he converted from this view, recognising that Morandi was 'a man intent, not simply a painter of bottles… but a man intent on exploring subtle equations of forms, placing and atmospheric effects… separating their volumes and colour and then interlocking them again through an alchemy he alone understood.' It is not inappropriate today to compare him to Mark Rothko, another painter who created his own inner world that reflected all humanity and its tragedy, and communicated it for all time.

Of course, to understand better about Morandi, it is necessary to observe this condition, of a massive and obsessive repetition, by visiting the Morandi oeuvre held and displayed en masse at the Morandi Museum in Bologna, his home town. Here, even more so than in New York, there is something about Morandi works en masse that chills the soul, no less. Morandi was a devotee of Cézanne, whose repeat paintings of Mont St Victoire never do seem to pall. Cézanne's 'Apples' can be read as fulfilling the whole world of emotions, running from the calmest stage of meditation to abjectly distraught feelings, or to the heights of pleasure and delight. In contrast, Morandi's still life paintings seem on occasion to be static and lifeless. One wonders why the early landscapes (for example, 'Landscape with Farm House in Distant Hills', 1929; or the earlier 'Landscape' of 1921, which pays and repays dividends to the observer with its subtle, enigmatic shadings of green; or 'Landscape with Pink Houses', 1925) - of such quality as masterly works - seem to have been pushed along the shelf of Morandi's oeuvre in comparison with the remorseless repetitiveness of the still life works of the middle period. The pristine 'Still Life' (1918) suggests a still young artist shaping up for fame in the realm of the modern masters. Was there then perhaps some psychiatric condition that gradually overwhelmed this emergent and precocious talent of the young modernist? So it seems.

The years of the Second World War found Morandi producing a notable output. There were close on 80 landscapes, and 130 or so still life works, from all of which the Metropolitan has selected a strong representation in its 100 or so exhibits. Clearly, Morandi was traumatised by the effects of war on his society, and perhaps this was, so to say, hidden in his personality rather than self-evident. The effects are more evident in his paintings, especially the still life works. Efforts to break out of any straightjacket are revealed in the tortured still life wartime works such 'Still Life' (1943). After the war, a new lyricism crept back into Morandi's work, expressed now through the still life works after 1945. Some of the old homage to Cézanne re-emerged in the domestic and village landscapes of the 1950s. The still life works of the 1957-60 period exhibit a new and magical tone of blue. Certainly, Morandi's inner turmoil was coming to reach a resolution through his paintings in the final decade. The landscapes after 1960 were his triumph.

It has been predictable that certain contemporary reviewers have sought to flush out a discrete sexuality in Morandi's standpoint. It is misleading to seek any such 'quivering' quality in the work of any period. Rather, there can be found a solid level of containment, which strengthened Morandi's creative and artistic consistency. This exhibition has now provided an opportunity to re-assess Morandi's particular and unique talent as a painter, of whom Italy can now at last be justly proud. The Metropolitan Museum of Art, New York, has ably accomplished this revision. And given the financial turmoil affecting the citizens of New York right now, there could be nothing better than to step into the Morandi exhibition and selectively focus on, say five, works there, perhaps two landscapes and three still lifes. (A limited but effective de-stress palliative.) 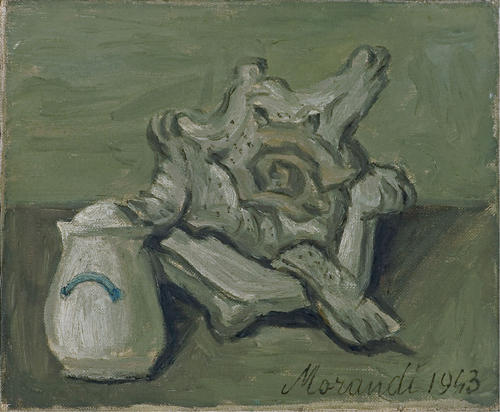 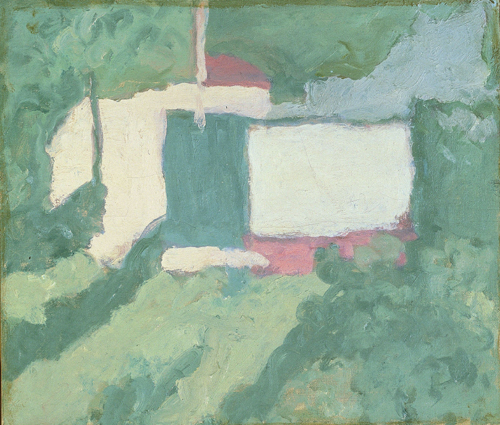