Of the best exhibitions at the Edinburgh International Festival this year, Monet is at once the most ambitious and significant in terms of size and historical importance. It is also the most restrained in emotional terms, and does not possess the emotional candour and openness that can be experienced in the other fine exhibitions this summer, Helen Frankenthaler, Paintings on Paper, in the same building as Monet, and Winifred Nicholson at the Dean Gallery. Monet's paintings appear to possess less emotional power partly because Impressionist painting is so well known and so often reproduced. There is little to surprise here except perhaps the sheer magnitude of his productivity in a short space of time and the tragic and precarious circumstances of his life during this period. Monet's paintings exude calm and happiness, an almost idyllic atmosphere of children playing in the garden at Vétheuil, at a time when he was preoccupied with his wife's grave illness and subsequent death, severe financial problems and consequent domestic upheaval.

The National Galleries of Scotland have staged the Monet exhibition to celebrate the newly refurbished Scottish Academy Building. Some 70 paintings, by Claude Monet (1840-1926) from the period 1878-1883 are beautifully displayed alongside a further 20 by older artists for comparative purposes: Delacroix, Corot, Daubigny, Millet and Courbet. Between September 1878, when he moved to the small village of Vétheuil on the river Seine, 70 kilometres north-west of Paris, and April 1883 when he settled at Giverny, Monet painted a remarkable 350 paintings. His work had been controversial as early as 1874 when his sketchy paintings such as 'Impression, Sunrise' outraged the public. One critic wrote that it had been, 'executed by the infantile hand of a school child who is spreading out colours on any sort of surface for the first time'.

This was the beginning of Impressionism. A key figure in the early career of Monet and other painters (Sisley, Pissaro and Renoir) was the patron Ernest Hoschedé who collected their early works. In spite of a large inheritance and good marriage, Hoschedé's fortune collapsed and he was forced to sell his art collection in 1878. When Monet moved to Vétheuil, he invited the Hoschedé family, with their six children, to live in his house there. They numbered 12 in all, plus servants. One of the loveliest paintings in the Edinburgh exhibition is 'The Artist's Garden at Vétheuil' (1881) with three children, two of the Hoschedé family and Monet's younger son Michel. Monet's private life, which involved extreme financial anxiety and his wife's illness, is not an overt feature of his painting at this time. Indeed, his remarkable skill dominates the work in the exhibition, even a detachment. The works mostly convey sunshine and a sense of calm. His letters of the same period are, by contrast, quite desperate with pleas for financial assistance. Monet painted many scenes in different seasons and different conditions, a practice developed by fellow Impressionists such as Sisley.

In spite of Monet's remarkable productivity his financial problems continued. By August 1879 his wife Camille became more seriously ill. She died on 5 September 1879, aged just 32. Monet was naturally devastated, as the painting, 'Camille Monet on her Deathbed' (1879) reveals. Because of their unorthodox domestic arrangements, rumours soon spread that Monet was having a close relationship with Alice Hoschedé, due in part to her reluctance to join her husband who had been forced to take work in Paris. By then, Monet was himself six months behind with rent. His servants duly left, as they could not be paid and the winter of 1879-80 was one of the harshest on record. The Seine froze and when the thaw took place Monet set up an easel outside to paint plein-air, and capture the dramatic and bitter conditions. After Zola described Monet as the 'leading Impressionist', his sales finally picked up.

Both on the wall and in the catalogue, the exhibition looks closely at Monet's considerable achievements as a painter of plein-air landscape. But this goes beyond scrutiny of a major figure within the Impressionist movement. The exhibition asks - and asks the visitor to ask - the questions Monet put to himself in these years. What was the essence of landscape painting? How might this be achieved? How might one follow one's own sensations, achieve one's own instinctive goals in the representation of nature? How did one organise paint in ways that were at once descriptive and expressive? These were probing questions about the nature of painting and the future of art.2

A brief holiday with his brother on the Normandy coast in the autumn of 1880 proved a turning point in Monet's career. The dramatic coastline and cliffs were the impetus for his work over the next four years. His work was reinvented by the experience of the cliffs and the sea there resulting in a greater freedom of handling the paint and, at times, a sense of abandon in the act of creation. For the first time, he was released from serious financial worries by the support of his Paris dealer, Durand-Ruel.

The lease on Monet's house came to an end in October 1881. After a few months in a temporary house in the same village, they moved to Poissy. There, Monet and Alice Hoschedé (who was to become his second wife in 1892) made a fresh start with the children from their respective marriages. Although Monet had a fine view of the Seine from the studio of the large house there, he disliked the town. He travelled to Dieppe on the coast, a favourite village for numerous artists at the end of the 19th century, but Monet was dissatisfied there too. Pourville, another fishing village did, however, suit him and he painted prolifically there. Alice and the children from their two families joined him there during the summer months.

Pourville provided a range of subjects: cliffs, fishing nets, a church and the sea itself. It was here that he really began to work in series for which, in his later life, he became so famous. He painted many versions of the same subject in differing conditions and returned again and again to the coastline there. 'Rising Tide at Pourville' was the subject of 14 canvases in the summer of 1882. At Pourville, the traditional fishing nets provided Monet with the visual impetus to explore his love of Japanese woodblocks.

'Fishing Nets at Pourville' (1882), with its adventurous veiling of the landscape with the outstretched fishing nets, reminds us of Monet's interest in Japanese woodblock prints, which he collected. Such apparently haphazard, but in fact deliberately contrived, devices were common in the work of artists such as Utamaro, Hiroshige and Kuniyoshi. Monet's arrival at such a composition suggests that he had studied the ways in which such artists implied a sense of spontaneous looking, and applied it to his own naturalistic vision.3

In 1883 on a short trip to Etretat Monet painted 20 canvases of the coast using the cliffs and vast Manneporte, 'the massive natural structure of a great portal punched by the sea through the jutting shoulder of rock'. It was quite inaccessible from the land, requiring Monet to reach it via a damp, long tunnel. Two large canvases were produced on this challenging subject, one of which, due to his dissatisfaction with it, remained in his studio; it is now at the Metropolitan. The Entretat paintings are key works in Monet's career, as curator Richard Thomson writes:

The Manneporte is a truly striking composition. Its great sculptural form gives it the impact of the sublime. In the cramped confines of the cliff-rimmed bay, working in carefully timed sessions to avoid being stranded by the tide in a treacherous spot, Monet chose to bring the great portal into close focus, so that its huge arch fills the centre of the canvas, with views far out to the sea on either side … If he successfully evoked the sculptural sublime of the Manneporte, this was not to the detriment of naturalism and the actuality of looking. His sense of local colour was acute, nowhere more than in the sea's pearly green just below the horizon. He respected natural features, such as the flat strata set in the geological layering of the rock and chalk, or the streaks of deep brown soil spilling down from above. And he caught the moment, with silvery spray breaking on the rocks, paradoxically painted in quite matted strands.4

In the summer of 1883, Monet's dealer in Paris bought a number of Monet's paintings of Pourville and Entretat, which helped the artist move to Giverny. In September, three of his paintings were shown in America where Durand-Ruel was developing a market for Impressionist paintings. Most of Monet's Normandy paintings were bought by Durand-Ruel later the same year. Giverny became Monet's home for the rest of his life. The work represented in the current Edinburgh exhibition represents a period of intense hardship and tragedy, and a peripatetic existence. The work has been hitherto overlooked because the subsequent work, painted at Giverny was so significant. But, as Michael Clarke points out in his essay in the fine catalogue:

That crucial period enabled Monet to take stock, to measure himself against the achievements of his immediate predecessors, and then to strike ahead in a long career in which he, too, would come to be revered as a modern 'old master'.5 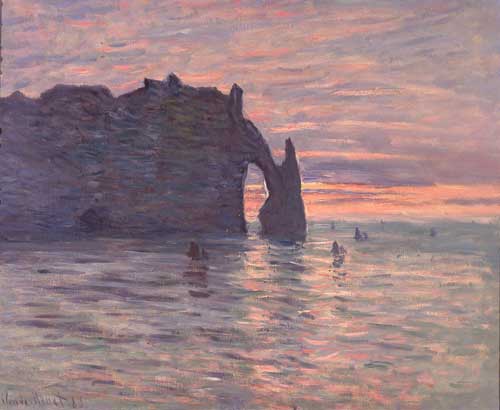 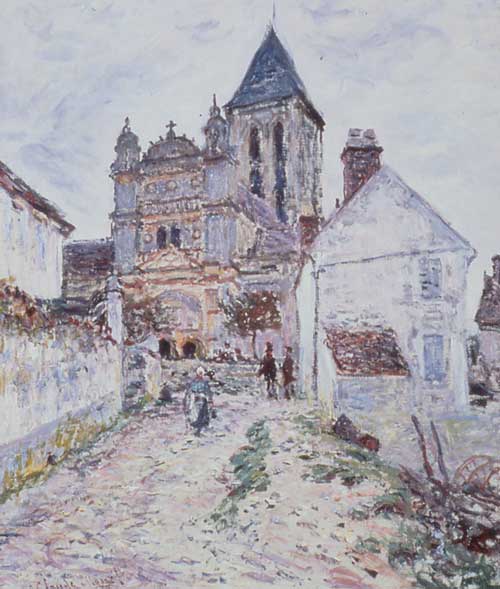 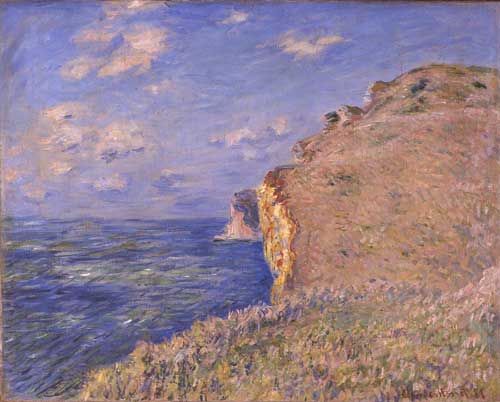 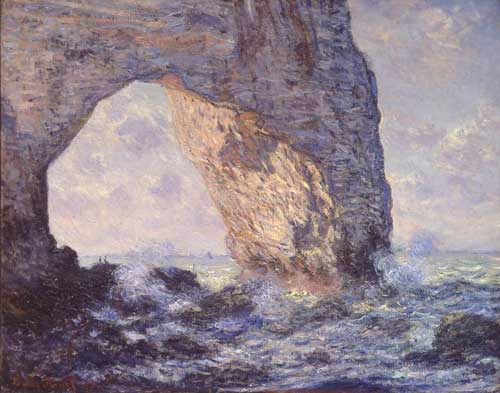 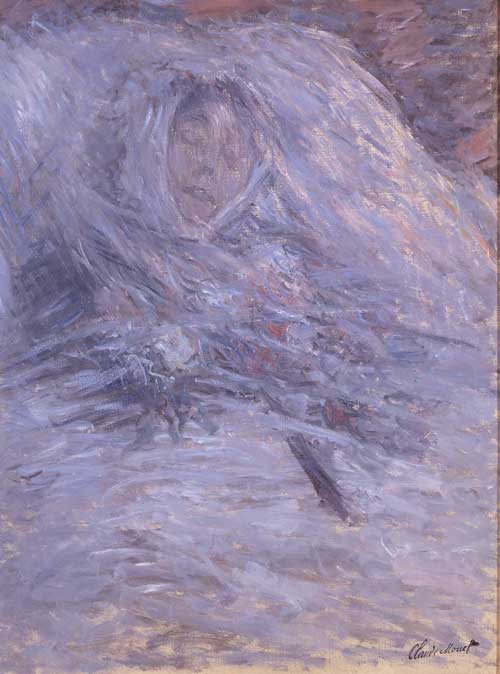