The premise of 'Matisse, His Art and His Textiles' is that textiles were 'the key to (Matisse's) visual imagination'. Hilary Spurling has recently published the second volume of her scholarly and impressive biography of Matisse, which inspired this current exhibition. In her catalogue, she admits that a comprehensive study of the role played by textiles in Matisse's career is not possible; nonetheless, she puts forward a most convincing argument for the importance of fabrics in his work, which, she argues, stimulated and released his creative powers. The exhibition aims to show that the essential properties of fabrics enabled Matisse to break through to a new level of pictorial reality. In the past, art historians and critics have emphasised Matisse's genius as a colourist; his decorative materials have been viewed in the general realm of 'oriental influence'. John Berger, however, captured the essence of his powers: 'He clashed his colours together like cymbals, and the effect was like a lullaby.'1

Henri Matisse (1869-1954) was born in the north-eastern industrial French town of Le Cateau-Cambrésis, the son and grandson of weavers. His childhood was spent in Bohain-en-Vermandois before he ran away to Paris in 1891. The area of Bohain had produced textiles since medieval times and the economic recovery following the Franco-Prussian war (1870-1871) led to a burgeoning industry for luxury fabrics, supplied to Paris couturiers: 'The weavers of Bohain were celebrated for their bold experimentation. The luxury textile industry in Bohain declined throughout the 20th century and eventually disappeared … the sumptuous fabrics, ranging from the complex and floral motifs of the 1880s to the more geometric and abstract patterns of the 1890s.'2 The grim, industrial environment of northern France held no interest for Matisse who described the first two decades of his life as having been spent in prison. He later discovered the colour and light of the Mediterranean, where he spent most of his prolific career. However, the dominance of colour in the form of the marvellous and varied fabrics that surrounded Matisse in childhood, and which he collected from an early age, were significant:

There were no galleries, museums or art collections on display, virtually no public statuary, not even a mural in any of these smoky towns. To a child already dreaming of escape, the only available outlet for a nascent visual imagination came from the sumptuous, shining, multicoloured silks produced in weavers' cottages and workshops all over Bohain.3

After completing school, Matisse studied law in Paris and returned to the north to work as a lawyer's clerk. He was rejected by the army for military service due to ill health. Further illness followed, where recovery was precipitated by his mother's present of a paintbox. He attended drawing classes, where his unorthodox approach led to a breakaway school being formed; he subsequently led a group of rebels to Paris. In the context of the present exhibition, it comes as no surprise that Matisse began to collect fabrics, such as tapestry fragments, bold cottons, Arab embroideries, African wall hangings, curtains and costumes. He created an illusion of grandeur and an oriental, magical and luxurious atmosphere in his apartments and studios. When he moved house, he also moved his fabrics, describing them as 'my working library'. He added to the collection all his life, from markets in Algeria, Morocco and Tahiti to the end-of-season sales of Parisian haute couture.

Matisse drew on his working library to furnish, order and, on a deep, instinctual level, to compose his paintings. Fabrics made him feel at home. Like virtually all his northern compatriots, he had an inborn appreciation of their texture and design. He understood the properties of weight and hang, he knew how to use pins and paper patterns, and he was supremely confident with scissors.4

To illustrate Matisse's practical skills, Spurling tells the remarkable story of his work with Sergei Diaghilev:

In 1919, he designed a Chinese emperor's cloak for Sergei Diaghilev, capable of unfurling the full length of the stage at the Paris Opéra. Diaghilev arranged for him to work on it in Paul Poiret's couture studio, where Matisse fell in love at first sight with a bolt of costly red silk velvet (much to the chagrin of Diaghilev, who, with uncharacteristic thrift, had budgeted for a cheaper cotton velvet). A top Parisian costumier had estimated that the gold embroidered cloak would take three months to make, but Matisse simply spread his breadth of velvet on Poiret's biggest cutting table, seized a pair of shears, took off his shoes and climbed onto the table to cut his design from strips of the gold stuff, assembling it by eye with a team of assistants who pinned the pieces into place as he worked, and produced the finished cloak in two days flat.5

Later in his career he demonstrated his innate skill using scissors like a pencil or paintbrush when he made his famous cut-outs of pure forms of colour. He himself described the use of scissors, '… as sensitive as pencil, pen or charcoal - maybe even more sensitive'.6He used his talents in this field in a range of work that was unrivalled, notably his marvellous cut-outs and the religious chasubles for the Dominican clergy at the chapel at Vence which he decorated:

He used immense sheets of paper like giant butterflies to create the semi-circular shape of the garments. He chose to cover the semicircles with a repeat pattern of simple forms, similar but different. He cut out flowers, fruit, butterflies and stars to match the different seasons of the Catholic liturgy. Pink, red, green, yellow and white, purple, black: the chasubles represent the costumes for a sacred drama, solemn and stylised; the decorated fabrics have their own liturgical and transcendental part to play.7

Matisse explained, 'Cut paper allows me to draw in colour. For me, this is a simplification … This simplification guarantees precision in the union of two materials which become one.'8

Spurling makes a distinction between the work that Matisse might have pursued, for he was certainly brilliant at it, namely couture and fabric or costume design, and the pursuit of a more profound, underlying ambition: the dynamics of light and colour. In his paintings Matisse could switch colourways in the manner of a manufacturer of printed fabrics; he had an innate decorative sense which attracted critics throughout his career. In response to the present exhibition, Waldemar Januszczak is in no doubt regarding the position of Matisse's achievements in the wider world. He writes:

The cloths had inspired Matisse to reinvent the painting act itself. Yet, tragically, all this revolutionary fervour is squandered on a meaningless return to stale beaux-arts orientalism. He's no Gauguin. He's no Cézanne. He's certainly no Picasso. He's nothing like the greatest painter of the 20th century; his trajectory is too shallow. In 1942, while the Second World War was raging fiercely around Matisse; while French Jews were being rounded up and transported to their deaths and while Picasso, in Paris, was subtly taunting the German occupiers with his two-faced insouciance, Matisse was still in the south of France, still painting girls and fabrics, still having exhibitions and occasionally broadcasting on Vichy radio. Having carried round a travelling book of inspirational textiles for most of his career, he had moved on to collecting entire couture collections of dresses ... You either hold it against Matisse that he spent the war years continuing with his pasha fantasies and broadcasting on Vichy radio, or you don't mind at all. I am firmly in the first camp.9

This is a beautiful exhibition, but one that also, inevitably, engenders a degree of disillusionment. 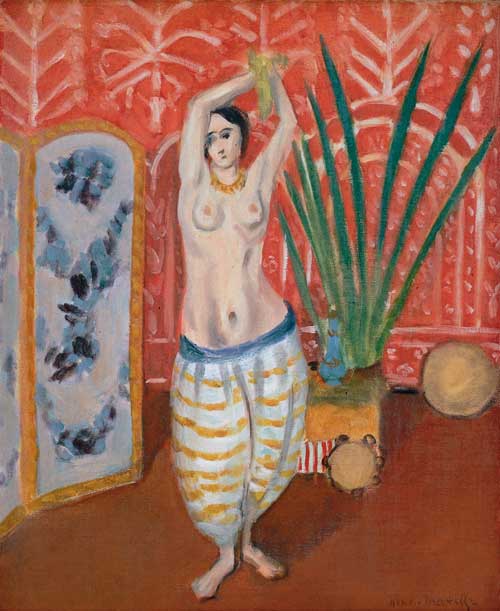 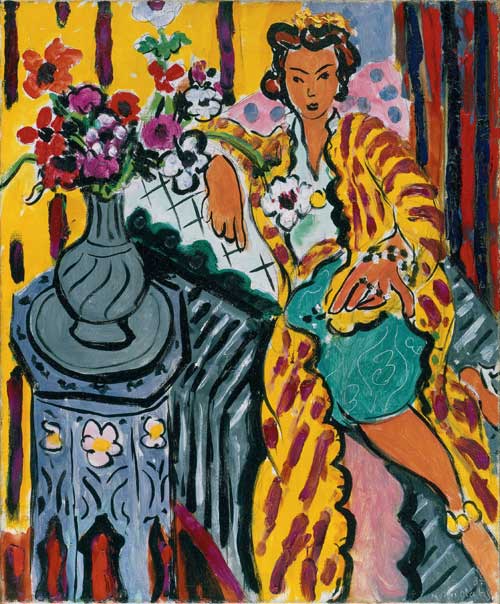 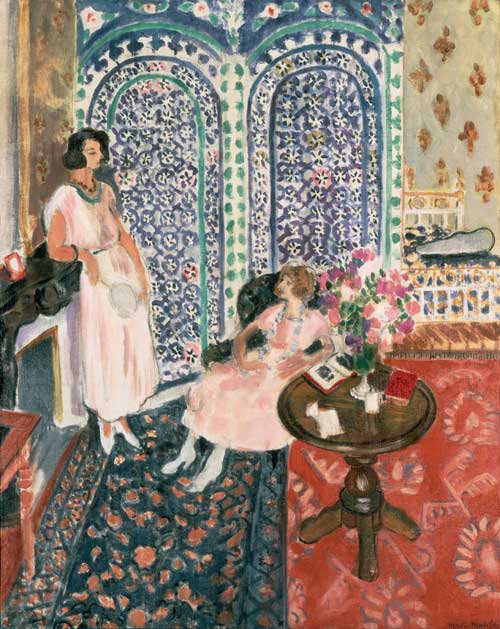 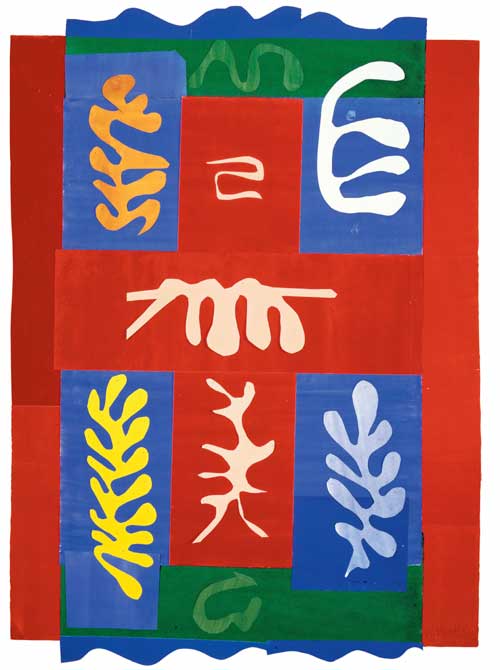