At first, before encountering the installations at Tate Modern, it might seem surprising that this 89 years old sculptress be chosen for the opening: yet there are few sculptors today whose work could so dramatically fill the great void space it occupies, and yet so naturally.

Louise Bourgeois's 'spider' is more than 20 feet high, is called 'Maman', and hovers protectively over what appear to be white eggs. Close by, the massive work entitled "I Do, I Undo, I Redo", consists of three steel towers. These towers convey the essence of the three activities with remorseless logic. Most of us spend large parts of our lives in one or other such mode. As Bourgeois says, "The Redo means that a solution is found to the problem. It may not be the final answer, but there is an attempt to go forward...". Louise Bourgeois was born in France, but her career developed mostly in New York. The commission could be seen as a typical arrangement of curatorial diplomacy -American, yet European: but the installations by Bourgeois, whatever the reasons of choice, do seem to fulfil the promise of this enlightened decision. In future years, it may be a hard act to follow, given these massive spaces, and the manner in which the ageing genius has filled them, and with what child-like wonderment. Which reminds one of some other, British options. In the future, how will Kapoor fill it, or Gormley, or perhaps most interestingly now, Philip King: save us from Caro, or Moore. Such installations are also plagued by exposure, or over-exposure. That cannot be said of Bourgeois. She has christened the space, and magnificently for today. 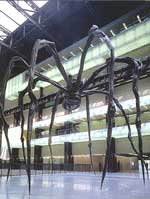