Two highly significant but very different landscape and garden theorists are Sir Geoffrey Jellicoe (1900-1996) and Charles Jencks (b. 1939). Geoffrey Jellicoe died in 1995, after 75 years of creativity world-renowned and admired as one of the key architects in the formation of the landscape profession. He left a remarkable and still evolving body of theory in landscape and garden design, practice-based and developed through application of a rigorously practical yet deeply researched vein of thought, which was derived initially from the study of classical philosophy and letters, then tried and tested in the arena of Renaissance Art studies and subsequently in the realm of contemporary painting and sculpture. Together with his fellow student from the Architectural Association School of Architecture, JC Shepherd, he paced out and surveyed numerous Italian Renaissance Gardens, and they published the fruit of their research in 1925 (publisher, Ernest Benn). Containing Shepherd's superb drawings, and enhanced by a significant clutch of photographs by Alinari, this work opened the eyes of many fellow professionals, just as modern design was getting under way. Subsequently, through a growing portfolio of project work, by close observation in the field, and through lifelong research, Jellicoe transformed the way we view the total environment. As Director of the Architectural Association, he enlightened many pre-war students as a teacher there. With one foot in classical learning, and one in the contemporary arts (his friends were Henry Moore, Ceri Richards; his inspiration, like so many others, the work of Paul Klee.) When Jellicoe died, he left a massive gap in the landscape world.

The second landscape and garden designer, of growing importance in the 21st century is undoubtedly Charles Jencks. This is not to denigrate in any way the brilliant clutch of his fellow American landscapists, such as Kathryn Gustafson, Martha Schwartz, the venerable Lawrence Halprin and his former student Angela Danadjieva, and, master of them all, Peter Walker. They are all in professional league of their own, as are the leading Europeans such as Hal Moggridge in England. But it has to be recognised today that Charles Jencks has quietly, and steadily built up his own body of work. Best known as an architectural theorist and post-modernist thinker and critic, Jencks emerged from the prescriptive morass of post-1945 architectural theory, and its lack of any clear direction, to follow new ground rules opened up by Robert Venturi, leading to a more eclectically diverse, and perhaps liberated, design ethos. Quietly against this cacophony of raised critical voices, disillusioned proto-modernists, Jencks was also, in a very personal way, exploring for himself and his wife, Maggie Keswick, house and surround in 'The House of Elements, Rustic Canyon' in California (1984). To colleagues at the time this seemed to represent for Jencks simply an insignificant, playful diversion. It remains now a superb evocation of fundamental ideals for the allegorical garden.

At the close of the 20th century, however, Charles Jencks was found to have moved further into landscape considerations and, more specifically, garden design. The richness of theory and its eclecticism in his sourcing, which seemed in the 1980s to be showing symptoms of over-exposure in the architectural arena, began to find a more appropriate field of endeavour in the realm of garden design, seeming to partly fill the gaping void left by the departure of Jellicoe in 1996. Jencks' longstanding marriage to Maggie Keswick (among her talents, a specialist in Chinese gardens) was brought to an end by her tragic death from cancer in 1995. Maggie Keswick and Jencks had exchanged ideas with Jellicoe for some time prior. Maggie's death did not occur before the major groundwork at the Portrack House gardens had been laid, in the early 1990s. Indeed well prior to that, as they fought her cancer together, Jencks' re-entry into the landscape cosmos had been precipitated by just this tragedy.

Now his powerful move into landscape-based design began to emerge from the private chrysalis at Portrack. The project had enabled a laboratory portfolio of ideas and inspiration to be developed without interruption, but with the growing approval of a significant coterie of friends, including architects Leon Krier, James Stirling, engineer Cecil Balmond and the sculptor Eduardo Paolozzi as well as other thinkers and writers such as Paul Davies (who was awarded the Templeton Prize in 1996 for his unique study, The Mind of God).

What had begun as a mutual celebration by Jencks and Keswick of a private world of landscape gardening, in an ancient European tradition much pursued by landowners in both 18th century England and Scotland became, in a short space of time, charged with an infusion of allegory, postmodern reflection and speculation, and theoretical exploration. The sculpted mounds, water features, and 'cosmic' ground profiles began to materialise under Jencks' direction, through several seasons and years.

These experiments (for such they were) began to breakout of the Portrack compound. In 2001 Jencks first went public in the grounds of the National Gallery of Modern Art, Edinburgh with a landscape entitled 'Landform Ueda' (now in great demand by children of all ages as the ultimate playground). Daniel Libeskind's project for the Imperial War Museum North (now built) at Salford by the Manchester Ship Canal was to be enhanced by a wholly compatible Jencks scheme, sadly axed for budgetary savings on the main building. And there are on the drawing board today a host of new 'mitigation' projects (with the successors in Scotland to the National Coal Board) whose ramifications look extremely interesting, although these remain under discussion.

Jencks’ book, published last year, on the Portrack project The Garden of Cosmic Speculation (Frances Lincoln Ltd) contains a very full description and elucidation of its development and the emergent philosophy over the years since 1988. The book is a rich mixture, but as with Geoffrey Jellicoe in his time, it is the sheer enthusiasm, drive, and intellectual speculation of the man that allows such ideas, now made manifest, to find a growing appreciation in the broader landscape and gardening community. The allegorical garden landscape was considered obsolete after Jellicoe. Charles Jencks has opened up new concepts for all. 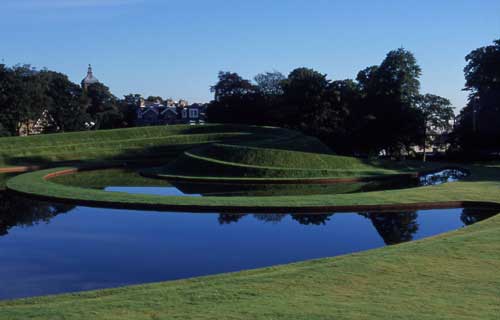 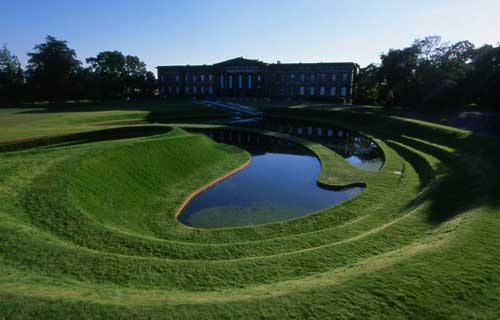