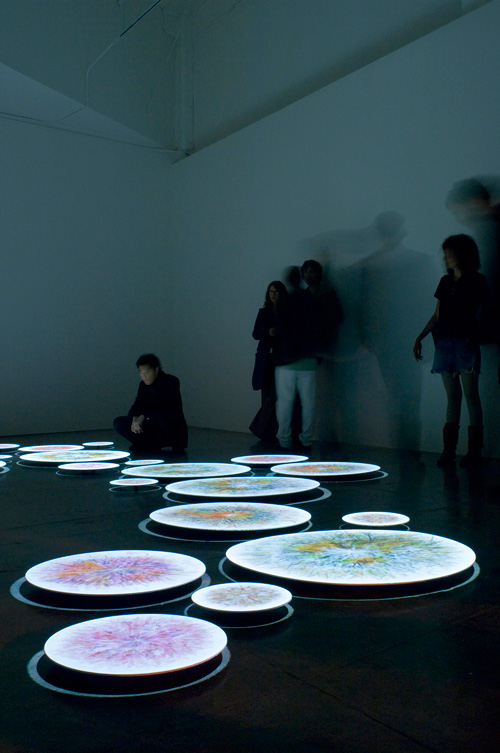 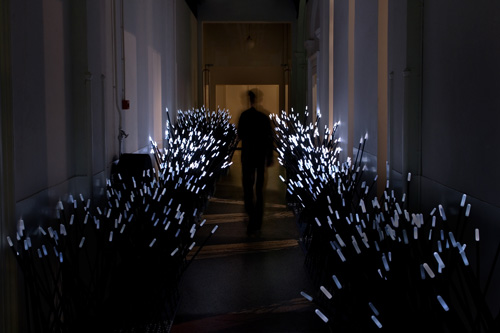 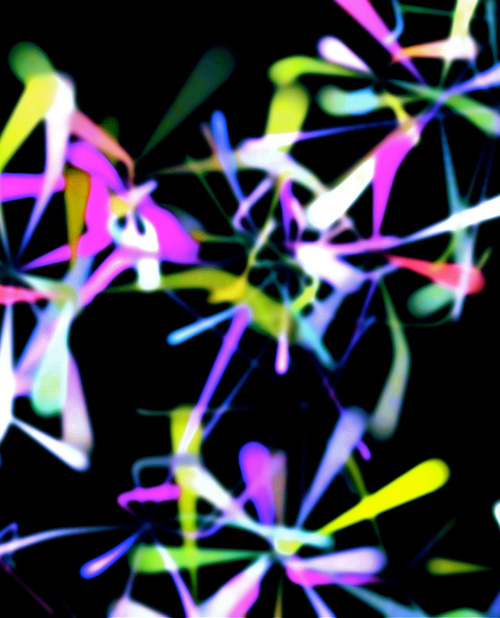 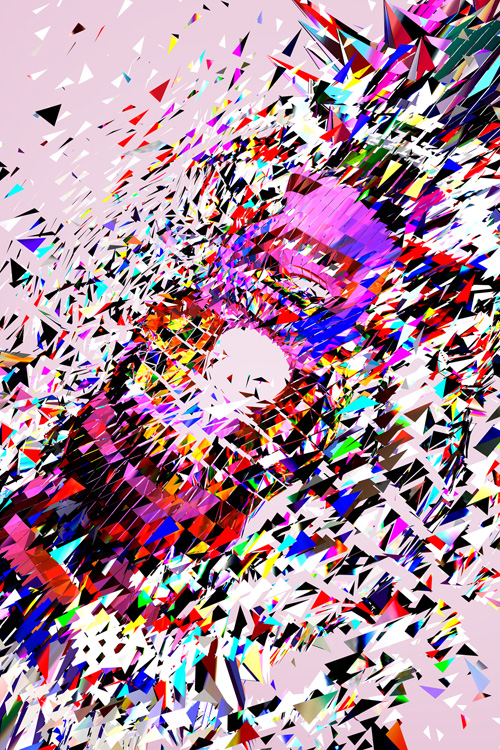 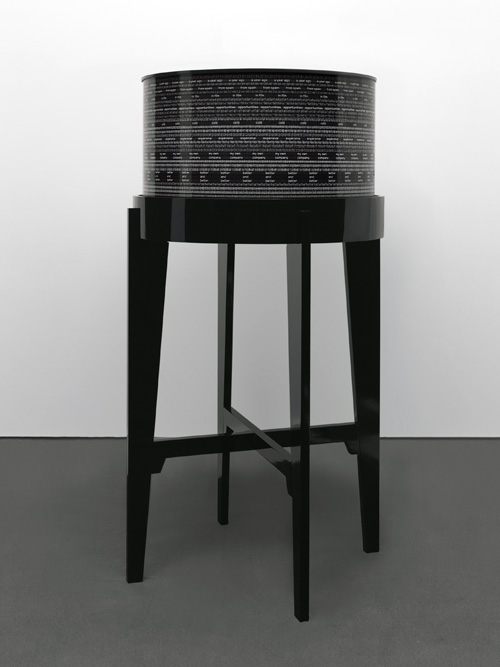 Code, interactivity and network, transport you back to childhood delights

Although digital is not necessarily virtual, the majority of works in the V&A’s Decode: Digital Design Sensations exhibition are virtually realised. The show combines three main issues: Code, Interactivity and Network. “Some works exist in a state of perpetual evolution others are generated by the behaviour of the spectator.”1 Walking through the dark space, lit by the glow of flat screens, LED’s and projections, I kept hearing “Wow” as the audience; being the essential participatory components in this responsive show, were continually amazed by the technology. To coin a much repeated cinematic phrase; “... we’re not in Kansas anymore,”2 but we are perhaps now, revisiting a contemporary version of those sensations experienced by early film audiences, astonished when suddenly faced with a approaching train.

Whether you interpret the binary digital code of 1 and 0 from a Sadie Plant3 Cartesian duality male (phallus) and female (lack) viewpoint, a Hindu algebraic or a Greek astronomical perspective, we have many to thank for this current technological revolution (well documented by Dr Aleks Krotoski4). Early mathematicians and astronomers (Zero), Babbage (the computer), Turing (the coding), Berners-Lee (the internet) and Steven Sasson (Kodak digital camera) are amongst numerous inventive minds that have contributed to our extraordinary contemporary connectedness, and to losing our stomachs in imax cinemas as we leap after flying Avatars.5 All of this, sensation prodding and virtual interactive digital imagery, has for the younger generation, who began their education clutching mice rather than pencils, become part of their everyday.

The entrance to Decode: Digital Design Sensations is a dark dream like path lined either side with what appear to be long bulrushes. Dan Roosegaarde’s Dune (2007), reed beds of bright white LEDs, are triggered by movement, they flicker and chirrup. You can’t help but stretch out your hand to disturb these long wavy lights, a modern day “fingers dragging through long grass” sensation. Some exhibits directly reference antique toys. C.E.B. Reas’s TI (2004), six circular floor projections uses “Processing”, an open source program environment to construct his continually changing images. Visually they are kaleidoscopic, the pattern growing from a central point remind me of the late Shelagh Cluett’s digitally manipulated mosaics, fractured details composed into waves.6 Digital Zeotrope (2008) is an extraordinary spinning barrel, commissioned by the innovative onedotzero, and made by the collaborative Troika.7 I can’t understand how this modern day magic lantern works. The lit drum is spinning, and there are lines of type projected from the inside, also spinning at different speeds from each other. There is no physical interaction with this work but it is mystifying and triggers many cinematic connections.

I remember hearing a scientist on the radio, explaining relativity as being like the sensation you feel when the train you are in pulls alongside another, and for a second you can’t tell which one of you is moving. That physical jolt; the rug pulled out from your perceptions, keeps happening throughout this exhibition. Robert Hodgin’s Solar (2009) is a sound responsive work; the screen image separates into floating planets if you blow loudly into the microphone. This satisfying interaction transports me back to happy science museum visits. While Yoke’s Dandelion (2009), a film of a giant seed head, offers a hair dryer to blow off the seeds, and has me toddling through shoulder high grass in some warm summer garden a long time ago.

Karsten Schmidt uses code and open source technologies in interdisciplinary practice and collaborative working. Schmidt’s Social Collider is a live map of twitter, tiny coloured threads trace correspondences between twitters across a screen, and we can read what people are saying to each other. Following these twitter connections, I wonder, what is the difference between armchair voyeurism, and people watching?

Audience watches audience interacting with Daniel Rozin’s Weave Mirror (2007). Rozin interviewed by V&A, reminds us that artists have long employed the newest tools available, “interactivity, point of view, human perception, image creation, participation etc – ... artists have always used new technologies for their art.” Weave Mirror requires a stillness of the subject, in order to reflect back a tonal shape on a grid of swivelling metal crescents. Fabrica’s Venetian Mirror also has school children motionless. Like Victorian subjects, holding their breath for fear of blurring, they watch themselves being imaged into a large baroque frame. But it is Ross Phillips’s Videogrid (2008) that causes the most giggling in the show. Divided into 25 mini screens, footage of one second loops show Key Stone Cop antics of slap stick delight. This hypnotically satisfying, visual game is instant and repeated gratification,8 together with people watching people watching themselves.

Perhaps technology advances faster than our senses, because rather than changing our sensations through new technological experiences, these most contemporary images and gadgets continue to evoke familiar childlike sensations. Giddy from all the bright lights and saturated colours, I leave this engaging exhibition trailing my fingers through Dan Roosegaarde’s reeds and setting off an applause of flashes and chirrups. Dorothy has left the building.

2. The Wizard of Oz, 1939, directed by Victor Fleming. Dorothy (played by Judy Garland) having just arrived in Oz looks at the unfamiliar surroundings and says to her dog “Toto I’ve a feeling we’re not in Kansas anymore”

4. Dr Aleks Krotoski, writer and presenter of The Virtual Revolution: How 20 years of the Web has reshaped our lives. BBC television 2010.  http://www.bbc.co.uk/virtualrevolution/presenter.shtml

7. Onedotzero, collaborators in this exhibition were “conceived at the start of the desktop digital revolution in the mid 1990’s...” and are “a contemporary, digital arts organisation with a remit to promote innovation across all forms of moving image and motion arts.” www.onedotzero.com

8. Sigmund Freud, Beyond the Pleasure Principle, J. Strachey editor, New York: Liveright Publishing Corporation, 1961.  Fort Da is a game that Freud watched his grandson playing. Fort meaning gone and Da meaning there. Freud witnessed his grandsons satisfaction and interpreted this repeated game as a way in which his grandson could emotionally cope with the absence and return of his mother.