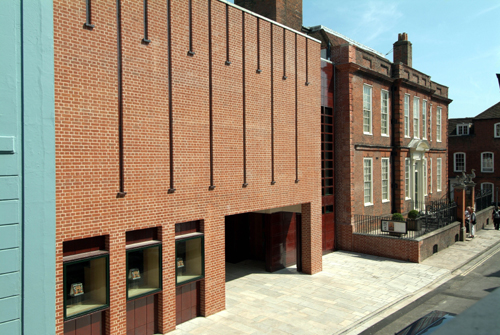 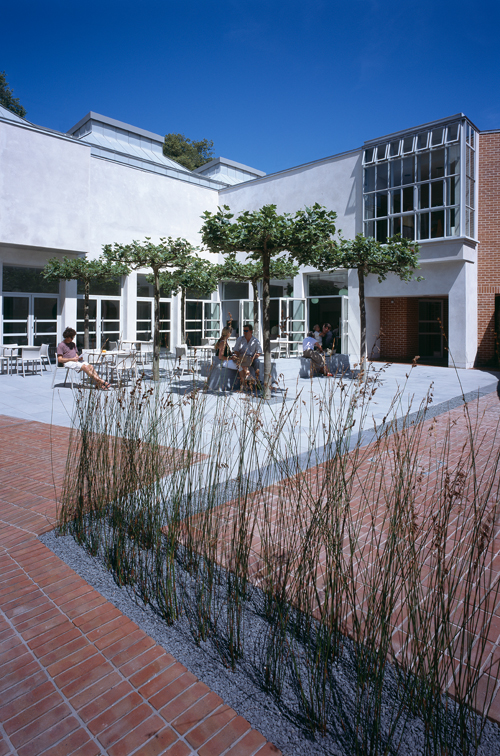 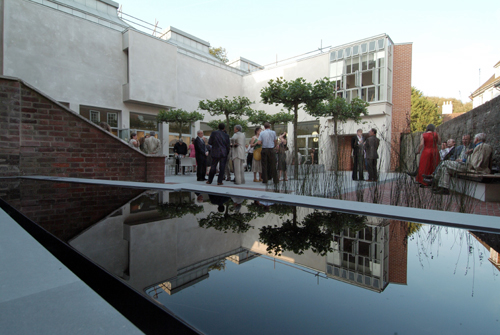 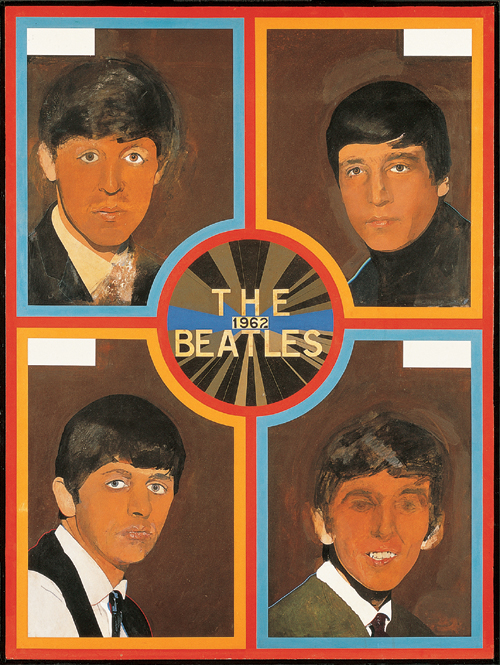 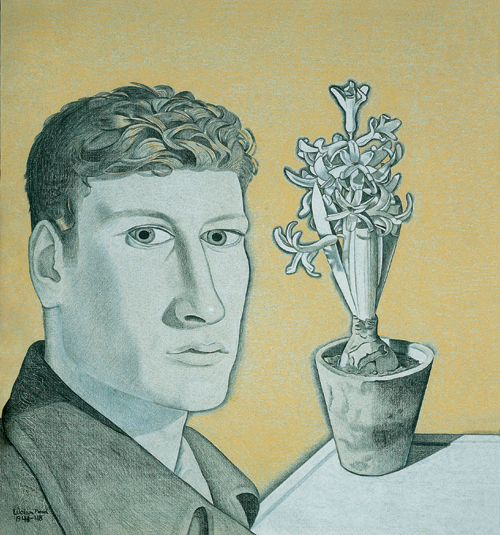 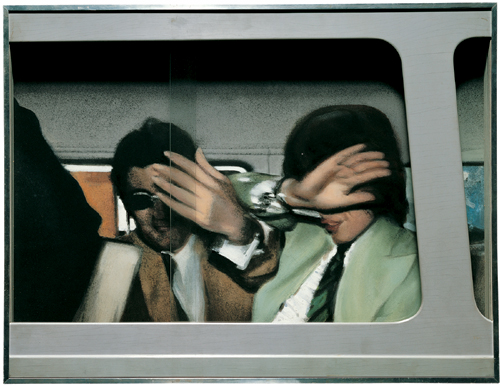 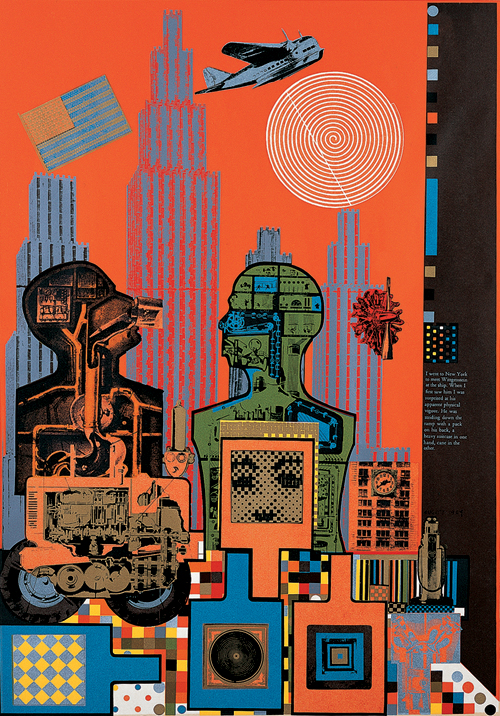 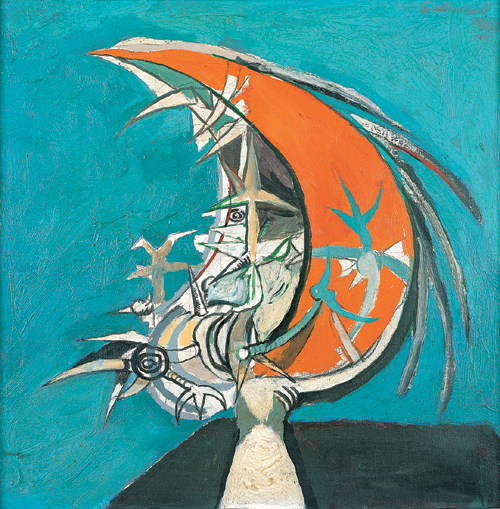 Pallant House Gallery, which opened on 1 July 2006 in the centre of Chichester, is a dramatic conjunction of old and new - dramatic, that is, internally. From the exterior, as approached from the town, a seamless joining has been achieved by the architects with great dexterity and carefully calculated understatement.

The 17th-century merchant's town house that is Pallant House has been allowed to maintain its pre-eminence; and yet, the finely detailed brick façade of the new gallery does not collide, but has a red-brown, salt-glazed terracotta envelope, set back, yet mediating between the two: this contains the new staircase and lift, which link both buildings. It all appears effortlessly contrived, but is the result of very careful volumetric manipulation. Entering through the new main entrance, there is a sublime moment when the visitor sees beyond the carefully modulated reception area into a kind of oasis of white Aaltoesque walls and screens. In the open, there lies, fully accessible, the conservatory/loggia, onto which at ground level the restaurant spreads out. It is not for nothing that MJ Long, the partner architect to Sir Colin St John Wilson, successfully redesigned The Ivy restaurant in London's 'theatreland'. This glimpse of a shady loggia is further enhanced at appropriate times by the olfactory effect of good coffee. The visitor is momentarily split in mind by that attraction, or the urge to move straight into viewing the collection, which is an historic late 20th-century/early 21st-century creation, where 'Sandy' Wilson was able to build his lifetime's accumulation of important British modern painting and sculpture into the pre-existing but excellent early 20th-century Pallant House collection, the legacy of the Dean of Chichester, Walter Hussey and other local benefactors.

One has to stand back from this masterly architectural achievement for a moment to consider the remarkable way in which Wilson secured the collaboration and support not only of the local community and the planners, but, critically, the Heritage Lottery Fund. In fact, the progression of the Pallant House Gallery over the two decades since it first opened in the original building makes an impressive case study of how, when all concerned collaborate to achieve objectives that are entirely collective, overlaying the individual priorities of those involved, ultimately, a kind of serendipity sets in. Of course, the road to fulfilment had setbacks. But in the end, the same dogged determination that enabled Wilson to override the tribulations of the British Library project (a process likened by Wilson to the Thirty Years' War in European history) ensured that, ultimately, the funding of the new gallery (and the upgrading of the old), its preferred architecture and the actual accommodation of the collections came to fruition this year. Stefan van Raay, the new curator, was instrumental in the whole process, placing his new appointment on the line initially as a condition for achieving a contemporary building, to which the trustees agreed in 1997. Wilson himself accounts to Stefan's appointment as critical to the progress of the whole venture.

Indeed, the role of the curator in blending together the original Pallant House collection with Wilson's, and integrating both, was vital. The original Pallant House collection already contained gems of early British modernism, such as works by Sutherland (from Hussey), Bawden, Epstein, Duncan Grant, Ivon Hitchens, John Minton, Paul Nash, John Piper and Edward Wadsworth (many of the works coming via the Chichester Festival Theatre), all of which now seem to provide an introduction to housing the Wilson collection itself in all its historical prominence. The collection had been solicited by art museums as far away as Finland, and ostensibly too the Tate. But Wilson and his wife, MJ Long, sustained the vision to locate it in Chichester, a city with which they had already formed a long association.

The collection 'before Wilson', for all its worldliness, revealed a very moving Englishness through the works of Paul Nash, Matthew Smith, Ethelbert White, Eric Ravilious and even Ben Nicholson. In the house catalogue, the telling words of CRW Nevelson, written in 1919 in the predecessor to this journal, the Studio magazine, are quoted: 'The immediate need of the art of today is a Cezanne, a reactionary, to lead art back to the academic traditions of the Old Masters, and save contemporary art from abstraction'.

There was a reactionary tendency in England, not fully counteracted by the work of David Bomberg (works here gifted by Wilson), Nicholson, Moore (from the Hussey bequest) and John Tunnard, with Paul Klee and also Paul Nash (mostly added from the Kearley bequest). Now added to this debatable ground there swept in unequivocally the Wilson gift - leading on to the key works of the Independent Group, sculptures and prints by Eduardo Paolozzi, collages by Nigel Henderson, paintings by Richard Hamilton, Peter Blake, Colin Self, Joe Tilson, Patrick Caulfield, Howard Hodgkin and Ron Kitaj.

But then this excellently curated exposition turns astutely to include (also from the Wilson gift) an array of post-war British figurative art, with works by Lucian Freud, John Minton, Bomberg, Frank Auerbach, Michael Andrews, William Coldstream, Victor Willing, linked to Pallant House's past by two works by John Davies and again Frank Auerbach, both from the Hussey bequest.

New or recent commissions from the Pallant Gallery Trust now include a large wall drawing by Paul Huxley and contemporary works again from the Wilson gift, recent works by Anthony Caro, Joe Tilson, Patrick Caulfield and William Tucker. So the commissioning and acquisition process at Pallant House Gallery will continue apace.

The whole Pallant House Gallery is a momentous achievement, given the repeated vagaries that have in the past few decades afflicted British art, its collectors and entrepreneurs up and down the country. Pallant House demonstrates how, with determination, great things can be achieved. There is a certain saintly ethos about it all: can it be the proximity of a superb cathedral and its fine gardens within the city centre? Magical effects have been created. One should add final accolades: to the already much lauded garden designer Christopher Bradley-Hole; and to the trustees for not stinting on the budget for Pietra Siena finishes, Portland Stone paving (also on the ground floor) and English Oak skirting. The final accolades go to the curator, Stefan van Raay, to Sir Colin St John Wilson and MJ Long, as architects, and to Wilson as conductor, orchestrator and benefactor of this great gift to British architecture and art. If you wish to see his monument, look around here. (The architecture of the building will be reviewed in Studio International in fuller detail by this author during September).